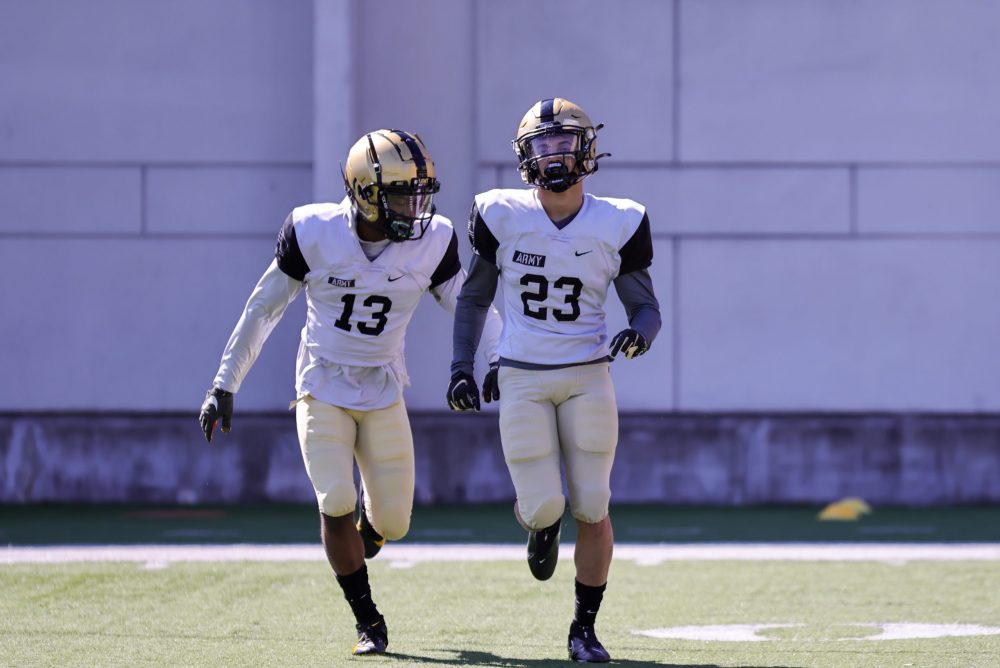 Sophomore cornerback Bo Nicolas-Paul (13) says every Army practice is a step closer to getting another shot at Navy. Photo by Lynn Fern/Black Knight Nation

Whether it’s Army’s best offense lining up against the best defense or one-on-ones, Army coach Jeff Monken says the sophomore cornerback, “really enjoys that and that brings out the best in him.”

Nicolas-Paul may have a little extra in his step this spring. The date of Dec. 10 can’t come soon enough for Nicolas-Paul, The topic of Navy was brought up a few times during his media session earlier this week. Nicolas-Paul was asked if he was content with his 2021 season when Army finished 9-4. He thought about it for a few seconds and said, “We obviously lost to Navy so to answer your question, no,”

“Every day, we feel it,” said Nicolas-Paul, a key special teams players for the Black Knights. “We feel it. Part of who we are is ‘Beat Navy.’ We finish a lot of things off with ‘Beat Navy.’ Our brand (is) ‘Beat Navy.’

“We feel that loss every day and we are counting down the days. I’m looking at 249 days (as of Tuesday) right now until we get another opportunity. Granted, we have some other obstacles and some other teams to face before that. But, they are always somewhere in our thought process.”

Nicolas-Paul says, “every practice is another step closer to beating Navy.” He wants to be the best teammate that he can be this spring, helping younger players improve. He wants to be, “just as good as a following as I am a leader.”

For Nicolas-Paul, It’s about about one word – progress.

“We love to compete,” Nicolas-Paul said. “We love to get after them. They are our brothers at the end of the day. But in between those lines during practice, we are competing and we are pushing them to get better. They are pushing us to get better. We are trying to give each other the best looks possible and work on our techniques and continue to progress.”