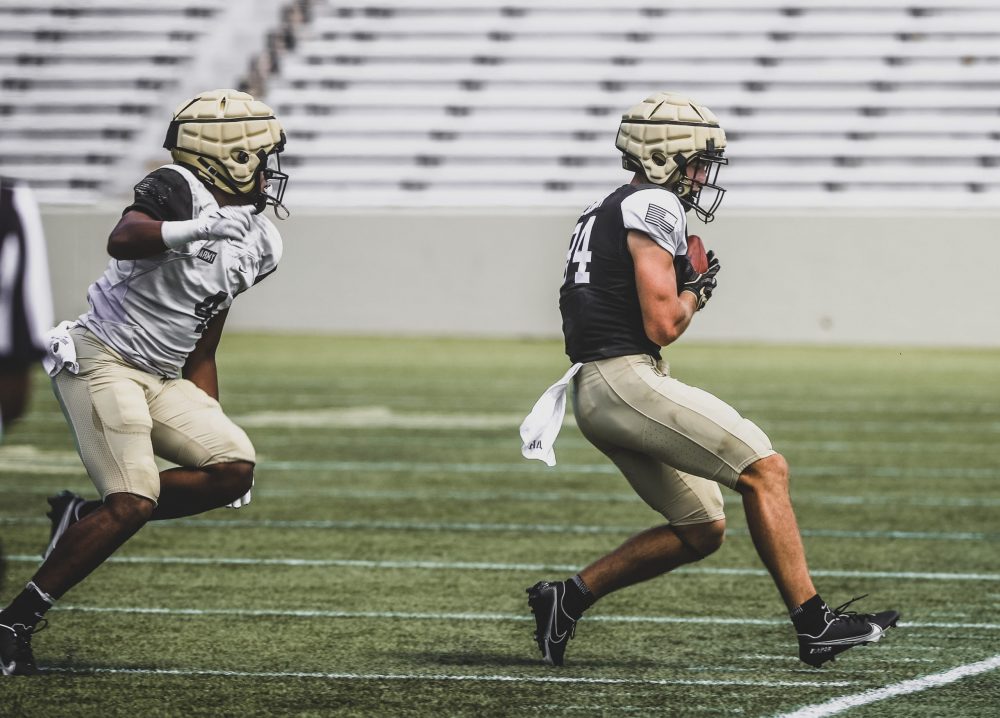 Cam Schurr beat the cornerback on an inside route and hauled in a pass from Jemel Jones early in Army’s scrimmage Saturday.

Schurr’s breakout day was just beginning. He ran to the left pylon and caught a perfectly-delivered ball from Cade Ballard for a 17-yard touchdown pass. Another out route, another reception. Five yards, turnaround, catch.

“I think I definitely got a little confidence out of it (his first catch) but once the flow of the game happens, you are not really thinking,” Schurr said. “You are kind of reacting and responding.”

Schurr’s reacting and responding produced seven catches in the scrimmage. Army was looking for wide receivers to step into its rotation with junior Isaiah Alston and senior Ryan Jackovic and Veshe Daniyan. Schurr, a 6-foot-1, 193-pound sophomore from Alpharetta, Ga., has elevated his game in the spring and preseason. Teammates have noticed.

Schurr had caught passes from another Army quarterback before he enrolled at West Point. His cousin, A.J. Schurr, was a signal caller for the Black Knights from 2012-15. Cam recalled times when the cousins would throw the ball around at Christmas family gatherings. Now, he asks A.J. for some guidance in succeeding in football and at the academy.

“His best advice is to know the playbook and do what you are told,” Schurr said. “Execute at a high level. Plays are going to happen. As long as you know your assignment and your job and execute, that all comes with the game.”

A scout-team player as a freshman, Schurr took a deep dive into Army’s playbook in the offseason.

“(I needed to) be more confident and playing fast,” Schurr said.

Like Alston said, Schurr’s routes are more sharper. He’s putting in the work each practice and each snap. Schurr said he’s following the lead of the experienced receivers in Alston, Jackovic and Daniyan. If he continues that trend, Schurr will certainly be joining the three for his college debut in Army’s season opener at Coastal Carolina on Sept. 3.