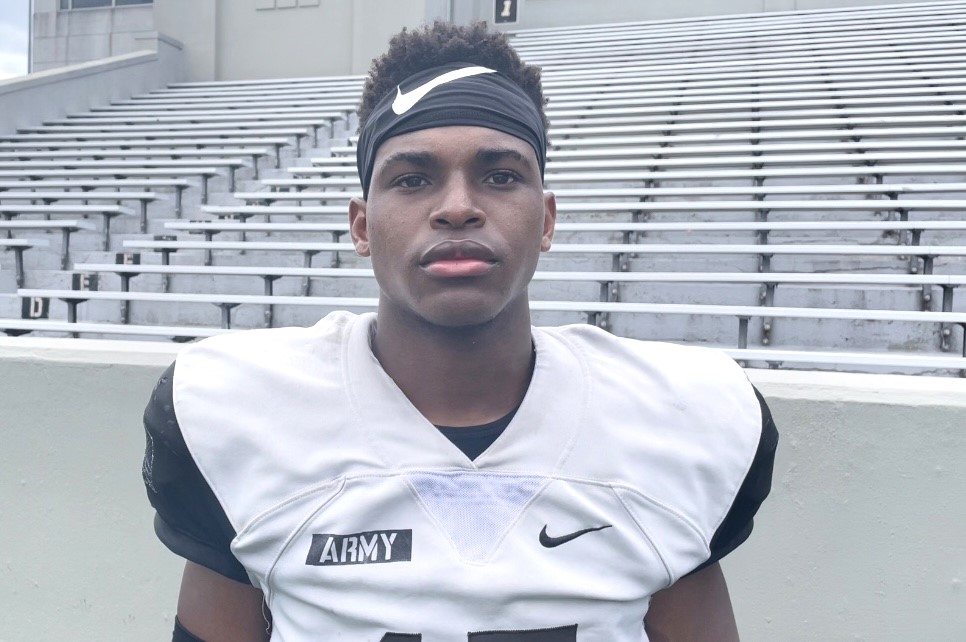 Isaiah Morris picked up a voice in his ear as the football fell the turf of Michie Stadium.

Safety Marquel Broughton was right on the ball, guided it toward Morris and said, “You take it. You take it.

Morris, a senior cornerbacker, scooped up the fumble and returned it 45 yards for the first touchdown of Army’s scrimmage Saturday. He also break up a potential touchdown pass to Cole Caterbone in end zone.

“I was blessed to come up with a couple of big plays but I would like to attributed it to my teammates especially on the forced fumble,” Morris said. “Marquel Broughton was right on the ball. He could have easily jumped on it but he ushered it to me. We got pressure on the quarterback on the pass breakup and it allowed me to get to my receiver and make a play on the ball.”

Army’s cornerbacks had a productive day. Cam Jones picked off a pass by Cade Ballard on the scrimmage’s first series. Bo Nicolas-Paul picked up a fumble, stiff-armed a wide receiver and high-stepped to the sidelines in a highlight-reel play.

Schurr shines: While it was go-time for Army’s secondary, sophomore wide receiver Cam Schurr may have been the player of the scrimmage. Schurr caught seven passes including a 17-yard touchdown from Cade Ballard. He worked well with quarterbacks Jemel Jones and Bryson Daily, who also threw a 20-yard touchdown to Casey Reynolds, too. Schurr hauled in a pass over the middle from Jones early in the scrimmage and made a nice sliding catch on a throw from Daily.

“During the week, we practice really hard,” Schurr said. “It’s good to know the work that you put in pays off.”

Kicking on point: Cole Talley and Quinn Maretzki’s field goals from 40 yards or more out were a welcoming sight. Maretzki made a 49-yard field goal. Talley hit from 41 yards out. Sophomore Troy Gronotte’s two extra points were rockets.

NFL in house: Have to start putting together list of NFL teams visiting Army in the preseason to check out senior linebacker Andre Carter. Scouts from the Bears, Dolphins, Texans and 49ers attended the scrimmage.

Junior Shayne Buckingham worked with the top offensive line at right tackle. Junior Jackson Filipowicz played center on the first team as captain and starting Connor Bishop was “held out” of the scrimmage as a precaution, coach Jeff Monken said. The Black Knights rotated in three to four groups on the line.

Bellan’s impact at slotback: Maurice Bellan broke the team warmup period with “Go Army” before the start of the scrimmage. If you’re looking for an offensive player to have a breakout season, Bellan might be a good choice. He continues to impress in his move from quarterback to slotback. Army’s coaching staff wanted to give Bellan, who played three snaps at quarterback in 2021, more of an opportunity to take the field and make a difference. Watching Bellan with the ball in his hands Saturday, it feels like something electric can happen every time he gets a touch. Army coach Jeff Monken said Bellan was one of the players that stood out during the scrimmage. Bellan had a run of about 20 yards as he broke into the secondary. Bellan’s move has made a deep Army slotbacks group even deeper, adding to Tyrell Robinson, Braheam Murphy and Ay’Jaun Marshall.

Other observations: Sophomore Jarel Dickson received a good share of the carries at fullback as the coaching staff looks at the younger players for the important No. 3 and 4 spots behind veterans Jakobi Buchanan and Tyson Riley…

The freshman scrimmage was held after the veteran’s. Some upperclassmen also played with the plebes. Sophomore linebacker Brett Gerena returned an interception for a touchdown. Gerena had a pick six in the Black Gold spring game.

Army will break into the travel squad for the season opener at Coastal Carolina (Sept. 3) and scout team this upcoming week.