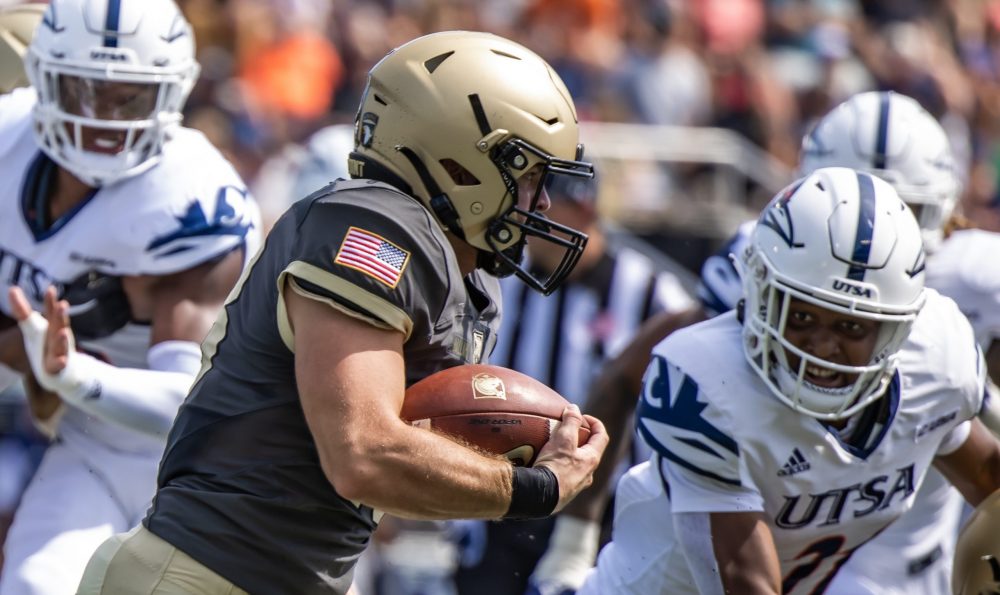 Cade Ballard’s passing yards against UTSA were the most by an Army quarterback in 15 years.

Ballard’s poise and feel for the game shined on a handful of throws and that didn’t go unnoticed by Army offensive coordinator Brent Davis.

“He’s always had that great savvy throwing the football and just awareness,” Davis said. “He’s a gunslinger. He’s a Baker Mayfield type guy as far as playmaking and just his presence in that mold and he is able to make things happens.”

Ballard, whose 221 yards are the highest since Carson Williams passed for 321 against Tulsa in 2007, entered the game on the final play of first quarter. Starting quarterback Tyhier Tyler threw a 77-yard touchdown pass to Ay’Jaun Marshall on Army’s previous play.

Coach Jeff Monken said he is “comfortable” going the same combination of Tyler as the starter and Ballard coming off the bench against Villanova Saturday based on the unknown of how opponents will line up defensively.

“Tyhier has more game experience than Cade so sometimes to start the game we have no idea what we are going to see and a guy with experience, he handles that pretty well and we get settled into a groove.”

Davis said he was “real pleased” with the play of both Tyler and Ballard last Saturday. When asked about Ballard, Davis said his playmaking ability “was off the charts,” highlighting a 42-yard pass to Braheam Murphy late in the second quarter and a 15-yard flat pass to Tyrell Robinson.

“(He) backpedaled out of getting pressure, went to his left and found a crossing receiver before halftime and hit Murphy, an unbelievable play,” Davis said. “Threw a dime of a pass to T-Rob out in the flat with a guy bearing down on him. He couldn’t even see the guy. He just dropped it over his shoulder 18 yards. Incredible.”

Another one of Ballard’s qualities is he’s never satisfied. He wasn’t thinking about the passes he completed after Saturday’s game. Ballard, who had back surgery early in his college career, was thinking of an errant pitch that didn’t lead to a gain in overtime.

“There’s some things he’ll tell you that he’d like to have back and some average things that he needs to do better and he will,” Davis said. “We’ve always seen the things that he can do. This is the best that he’s felt physically for one thing. You see how quick he is and breaking tackles. Two years ago, he wasn’t the same guy physically. He’s in the best shape that he’s been in.”

That stood out in Ballard’s running. He gained a career-high 58 yards and had a team-best, 21-yard run.