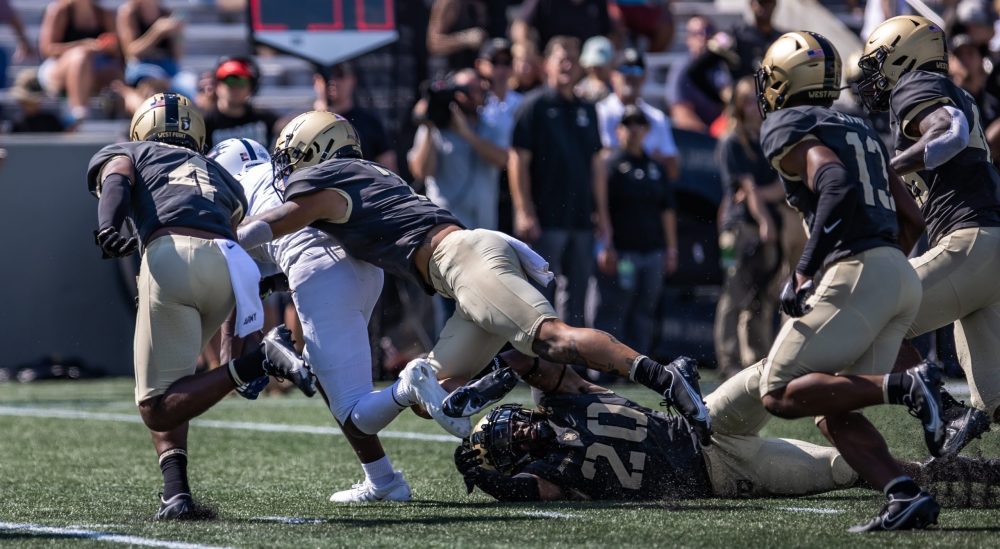 Was warned in the press box during halftime that Texas-San Antonio sixth-year quarterback Frank Harris would figure out Army’s defense in the second half.

Dismissed that notion after watching Harris miss two wide-open throws for touchdowns in the first two quarters. Was wrong. Harris completed 17-of-21 passes for 194 yards and two touchdowns including a game-winning overtime pass in a 41-38 loss for the Black Knights.

Most of UTSA second-half passes were underneath routes, some on double slants. Wasn’t sure if Army was giving those throws up over deep routes or not. But, the Roadrunners certainly took advantage of it.

Army’s defense was on the field for 81 plays, that’s 151 snaps in the first two games, certainly not a recipe for success. The Black Knights played 152 defensive snaps over its first three games last season.

Said on our recap podcast (check link below) that Army should have a set 11 players on defense instead of shuffling defensive line and inside linebackers out. However, considering the amount of snaps through two games, get the thought of keeping players fresh.

Shuffling defensive players may have cost Army its first forced turnover of the season as it got caught with 12 players on field, erasing Aaron Bibbins’ interception.

What team is leading the nation in passing efficiency? Army by a wide margin (252.55, USC is second 212.57). Cade Ballard made some major-league throws, fitting a flat pass perfectly to Tyrell Robinson (a pass I haven’t see many Army quarterbacks make) and standing in the pocket under pressure on a 42-yard pass to Braheam Murphy.

Despite the success in the air, Jeff Monken said passing isn’t the answer to successful football at Army.

“Everyone wants to talk about the passing yards we had,” Monken said in his postgame press conference. “We threw the ball for a bunch of yards, who cares. We don’t win that way. We win by running the ball and stopping the run. We didn’t do that or do it consistently. Sometimes, we are blocking the wrong guy or they are just whipping our butts. Sometimes, we weren’t in the right play that we needed to be.”

Army fullbacks Jakobi Buchanan and Tyson Riley were held to 38 yards on 19 carries. Through two games, fullbacks have combined for 99 yards on 39 carries (2.5 yards per carry). Army’s longest run by a fullback is nine yards this season. B-backs had 61 carries in Army’s first two games in 2021.

UTSA jammed the line with 10 or 11 defenders, taking away the fullback and daring Army to pass. If that’s the case, the Black Knights need to get the ball in the hands of their playmaking slotbacks more. Ay’Jaun Marshall, who caught three passes for 87 yards and a touchdown, didn’t have a carry against the Roadrunners.

Not sure how banged up senior safety Marquel Broughton is. Broughton was hurt on the second to last play in overtime and missed some snaps in the second quarter. Army needs the two-year captain, quarterbacking a secondary that is banged up.