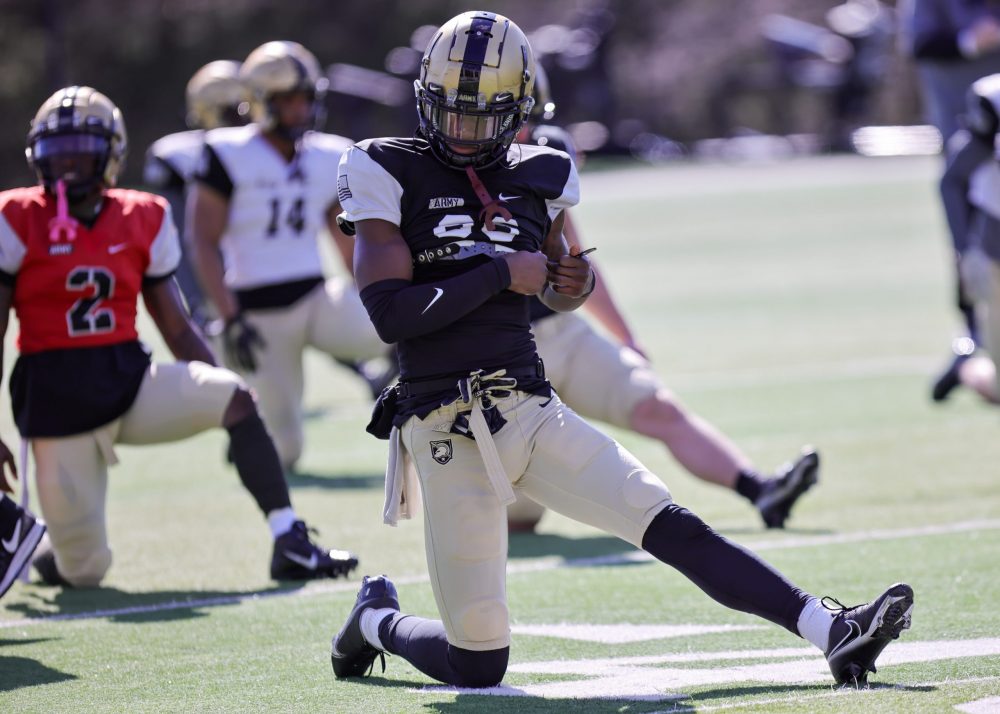 Isaiah Alston isn’t content coming off one of the best seasons by an Army wide receiver in the Jeff Monken era.

The sophomore believes he can improve. He talks about working on going up and elevating to catch passes. He discusses how his role has changed on and off the field now as one of Army’s more experienced wide receivers.

It’s the team’s brotherhood and culture that led to Alston staying at West Point after he entered his name in the transfer portal in January.

“It was an interesting process,” Alston said. “It was a very stressful process when I did decide to go into the transfer portal. Just talking to other teams just wasn’t the same and didn’t feel right with me. The thought of leaving West Point, it just didn’t sit right with me.

“The impact that they (the brotherhood) have on me to get better every day, I felt like I would be letting a lot of people down if I left West Point.”

Alston said when he entered the transfer portal, “I never really was 100 percent, ‘I’m leaving West Point.’ I was just kind of exploring my options.”

“I talked to some of my teammates over that period of time that I was in the transfer portal and me personally, I decided to stay,” said Alston, who has been playing football since he was five years ago. “I wasn’t like anyone convinced me to stay. The culture in the locker room is just something different and it didn’t feel right leaving that.”

Alston went through the transfer portal process with Army sophomore slotback Tyrell Robinson, who also stayed at West Point. Safety Aaron Bibbins and tackle Boobie Law, Alston’s classmates, was also there for him.

“Tyrell Robinson, Aaron Bibbins, Boobie Law and I have been best friends since the (Army) prep school and they were supportive of what we were doing but I could tell they were hurting,” Alston said. “It opened up my eyes and showed me these are my true friends here and all I need is right here in front of me. They talked to me during the days and they weren’t really trying to convince me to stay. They wanted me to stay. It didn’t feel right leaving them and leaving the team.”

Army coach Jeff Monken is happy to have his top receiver on the field for spring practice.

“I’m thrilled that he’s back,” Monken said. “I love Isaiah. He’s a great kid. His teammates love him and I know he loves his team and that’s why he’s here.”

“Me personally, I think this season (2021) was a little eye opener,” said Alston, who has caught a pass in nine straight games. “I feel like I can build on that personally and I feel like the offense is opening up more and we have a lot of guys that have shown we can catch the ball and make plays when the ball is in the air. I feel like the passing game can be a vital part of our offense.”