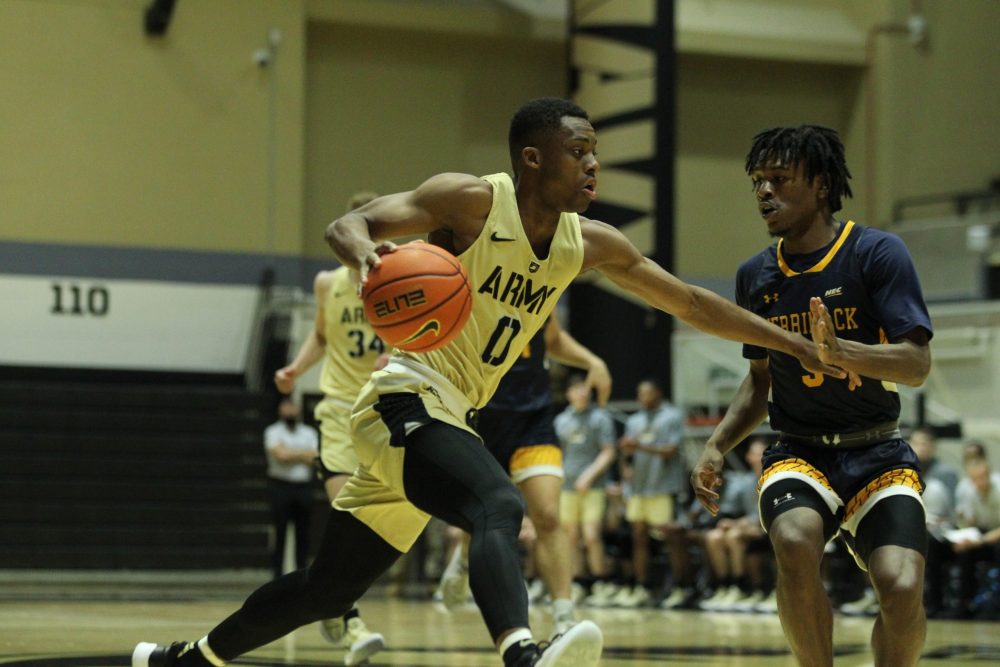 Aggressive is a description that Army coach Jimmy Allen used often during his postgame thoughts following a 74-51 win over Merrimack Wednesday.

The Black Knights’ cutting and drives were sharp, Passes from the post from Army’s big men were on point. And, Army pushed the ball after its best defensive effort of the young season.

“That was a great win for our basketball program,’ Allen said. “I have a ton of respect for Merrimack. I believe there are the oldest, most experienced team in the country. “I thought our guys came into this game with the kind of energy and aggressiveness at both ends of the floor that we needed. We were very solid defensively.”

Army (3-1) jumped out to a 39-20 halftime advantage and led by as many as 31 points, defeating a Merrimack team that was picked second in the Northeast Conference.

“We knew we had to go out and play a great, tough game and that nothing was going to be given to us out there,” Caldwell said. We’ve been talking about that the last two days.

“We were out there just playing tough, making sure we get all of the rebounds, get us some second chance points and try to beat them down the court. We came out there with a lot of energy, had a great defensive performance tonight.”

“TJ is one of those guys that has been battling an injury and hasn’t gotten a lot of minutes,” Allen said. “He did some solid things for a few minutes against Duke. He’s a very solid defender. He’s a terrific shooters and he’s continued to improve.

“Isiah, in our first few games, has given us a lift off the bench with his size and his athleticism. Defensively, he did a great job of rebounding tonight. He `does a great job getting out in transition.

“I was really, really pleased with Matt Dove. I thought Matt was aggressive offensively.  Early on, they tried to isolate their 5-man against Charlie or Matt and put them in positions where they had to guard them off the bounce and both of those guys were terrific at not fouling and making those guys score over top of them and making them have to make some tough shots.”