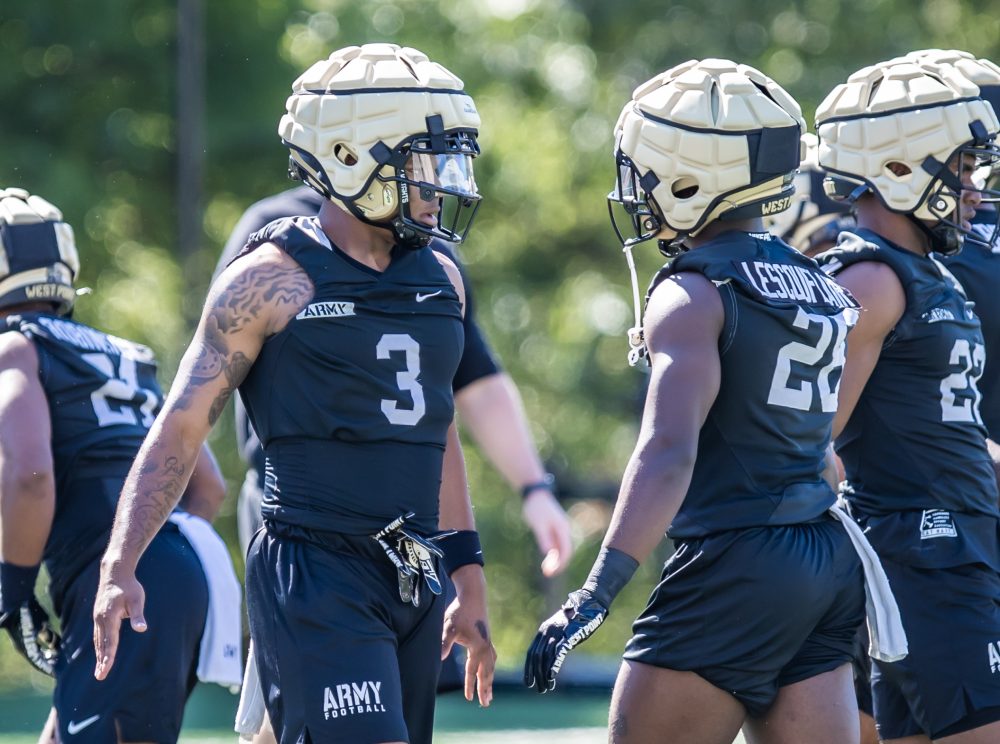 Ay’Jaun Marshall will be wearing No. 3 for the first game in his college career when he takes the field for Army’s season opener at Coastal Carolina Saturday.

Thinking about the moment takes Marshall back to his PeeWee football days. Three was Marshall’s first football number.

“I’m the third born (in his family),” Marshall said. “I’m the youngest child. My mother was like, ‘You are my third child so make sure you get No. 3.’ It kind of just stuck. I had it through PeeWee all the way up to high school.”

When Marshall took his Army recruiting visit, he tried on a No. 3 jersey. Marshall wore No. 39 his freshman season and No. 6 as a sophomore for the Black Knights.

Looking for an offensive player to have a breakout season for Army, Marshall could be the choice. Marshall has worked his way into the Black Knights’ starting lineup. He has seven career carries and one reception (a 22-yard touchdown against Bucknell last season) entering his junior year, With the graduation of A.J. Howard and Brandon Walters, Marshall anticipated playing a bigger role this season and put in the work in the offseason.

“I got up to 185-190 pounds,” Marshall said. “I’ve never played this heavy before. It was a big offseason. I knew my role would increase and I would personally have to become the best athlete that I could be to service this team. I think I did a great job of that. Our strength staff did a great job not just with me but with everybody.”

“He’s a playmaker,” Tyler said. “He loves football. He’s one of the smartest slotbacks. He knows every position in and out and just the energy he brings to the offense and the competitiveness.

Marshall has a full spring and preseason camp behind him this season. Last year, Marshall didn’t practice in the preseason and it set him back.

“Last season, due to some unfortunate circumstances, I missed camp and that derailed my progress going into my second year,” Marshall said. “But this year, getting that full spring ball and full preseason camp and just to be ready to lead the young group of guys and lead behind our seniors Braheam Murphy, Maurice Bellan and Cole Caterbone. Just to help them out. (Slotback) Tyrell Robinson is a dynamic playmaker. So just be able to step in, fill my role to help the team succeed, that’s what I am here for.”

Marshall says Army slotbacks are the versatile players on the team due to their running, receiving and blocking duties. He, Robinson and company are out to show just how dynamic the group can be this season.