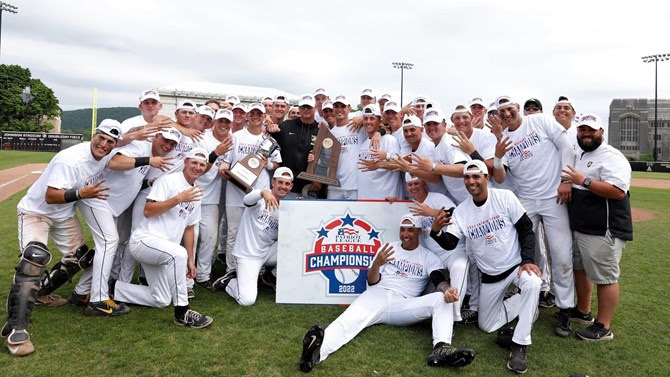 The Black Knights plated six runs in the bottom of the first inning, highlighted by Carter Macias’ two-run single, and never looked back in a historic 12-2 win over Bucknell.

Army (31-22) claimed its fourth straight Patriot title, a league record. The victory was the 100th for the Black Knights’ senior class.

“It’s awesome especially this one to be at home,” Army senior catcher Cam Cerruto told Maria Trivelpiece of the Patriot League. “It’s just a great feeling. We’ve battled all year. We were first in the conference in the regular season and just to come out here and keep fighting with the guys, there’s no better feeling.”

Cerruto delivered RBI singles in the first and fourth innings. Macias, a senior right fielder, drove in four runs on the day.

Tournament MVP Sam Ruta went 4-for-4 and Hunter Meade doubled, singled and drove in two runs from the top of Army’s lineup.

Army overcame the loss of starting pitcher Anthony LoRicco to injury with one out in the third inning. Winning pitcher Mike Ruggieri (3-4) induced a double-play ball to his first batter as Army relievers combined to hold Bucknell to six hits and two runs.