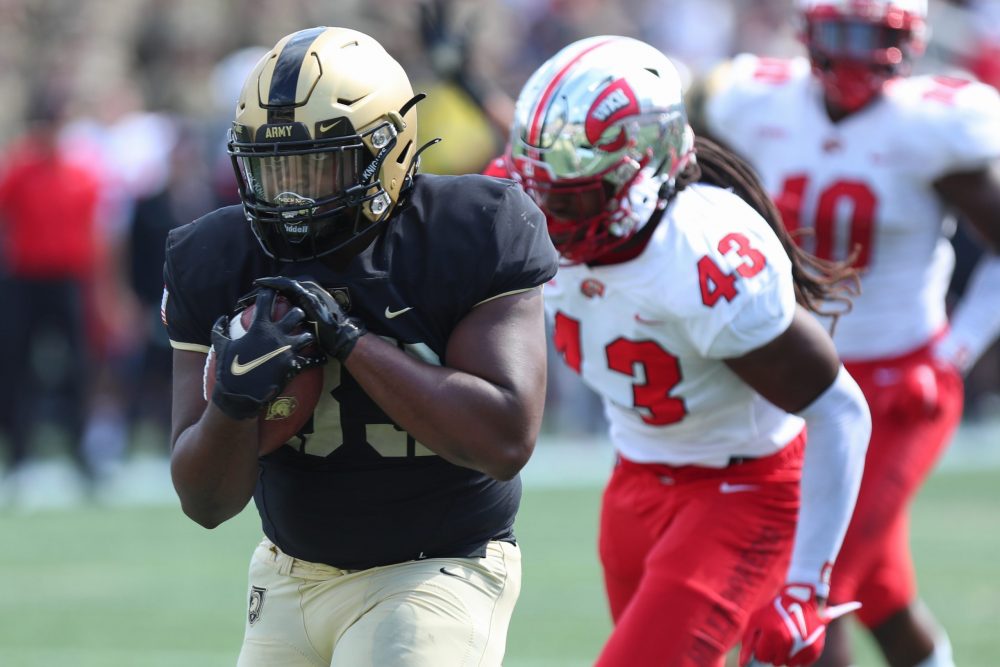 Jakobi Buchanan fired his fist in the air as he crossed the Michie Stadium goal line for the second time on the 20th anniversary of 9/11.

Buchanan and Army’s offense had overcome a sack and holding call that wiped out the fullback’s previous scoring run to build a three-touchdown advantage over Western Kentucky with 10:31 left.

A lead safe enough for a program that had won 10 straight home games entering Saturday.

But, Western Kentucky had other plans. The Hilltoppers answered with a touchdown two minutes later, stopped Army on fourth down at Western Kentucky’s 36 on the next drive and scored again.

After Army settled for a 30-yard field goal by Cole Talley, Western Kentucky added another touchdown as 22 seconds remained.

The finish would come down to Western Kentucky’s third onside kick and an unlikely hero emerged for Army. The kick bounced past Army’s front line and kept rolling almost 10 yards before sophomore tackle Simon Dellinger, who was converted from a tight end in the preseason, recovered it and seal a 38-35 victory in a wild ending.

“The second half we started off strong and towards the end, we just have to learn how to finish the game a little bit better,” Army senior quarterback Christian Anderson said. “We don’t want to be in that situation when it comes down to an onside kick. For the next game, we just need to be able to finish the opponent when we have the chance.”

There wasn’t a handshake by head coaches after the final whistle. Teams was separated as coaches exchanged words. Western Kentucky coach Tyson Helton sent his team to locker room and instead of remaining on the field for the playing of Army’s alma mater as most teams do.

Army’s 11th straight home win was filled with many highs and lows.

The Black Knights scored a touchdown on five straight possessions following a fumble by Anthony Adkins on their opening drive at Western Kentucky 9. Army’s defense forced a takeaway on the game’s first drive as Marquel Broughton picked off Bailey Zappe. Cornerback Jabari Moore turned away another Western Kentucky drive, batting away a fourth-down pass in Army territory.

But, three busted coverages – one on a 73-yard touchdown pass to Jerreth Sterns and another that set up a Western Kentucky touchdown – disappointed Army coach Jeff Monken. Zappe threw for 435 yards and three touchdowns.

“I’ll remain disappointed,” Monken said. “We can’t do that if we expect to play good defense and give our team a chance to win. Not at Army. We can’t do that.

“We made enough errors in the first half to lose the game on both sides of the ball. It wasn’t a real clean performance all the way through…We are very very lucky to have won the game and had we’d done the things that we can control better I think it would have been a different story the way that game finished up.”

The bottom line for Monken is Army did enough good to improve to 2-0 on the season. Anderson, who started in place of the injured Tyhier Tyler, rushed for a career-high 119 yards and a touchdown. He also threw a touchdown pass for the second straight week – a 40-yarder to a wide-open Braheam Murphy. Murphy caught a touchdown in back-to-back weeks.

Sophomore slotback Tyrell Robinson dived into the end zone for his first career rushing touchdown from 24 yards out as Army’s play calling had Western Kentucky guessing.

But, it was Dellinger and Broughton, who may have made the game’s biggest plays on onside kick recoveries. Broughton fell on the first two attempts by Western Kentucky.

“If you are ever at one of our Friday practices, coach Monken, he gets really live into the hands team and how to recover the ball, where your hand placement needs to be,” Broughton said. “When you continue to hear that from him it just gets stuck in your head. I just did what I was taught.”

Broughton said Army’s game entrance with each player running onto the field with an American flag remembered those for 9/11 was a sign of strength.

“That’s what I was thinking running out, ‘Man, America is strong and we are going to be the next leaders for America,'” Broughton said.

Army special teams coach Sean Saturnio caught up with Broughton in Army’s locker room after the win and told him, “

On a day where Army honored those who will be remembered for 9/11 with players each running onto the field with an American flag, “You are going to tell your grandkids about this (game).”

“That’s special,” Broughton said. “Right now, I don’t see it but in the long run when I get older I’ll see how special it was to actually get a win and represent our country.”