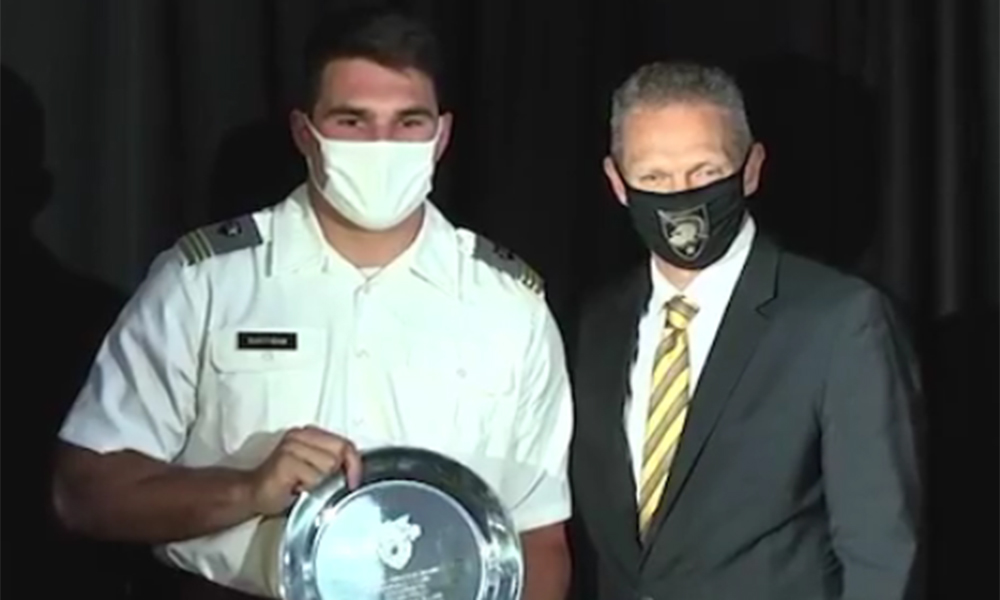 Rhattigan produced an all-American season in his first year as a starter, tying for the team lead in tackles (78) and tackles for loss (9). He addressed the team with a quote that he lives by every day, ‘When the going gets tough, the tough get going.” Rhattigan rose from a special teams player his junior season to a potential NFL draft pick.

“I think back on all of the past years and I’m sure you guys are aware that things weren’t easy,” Rhattigan said after receiving his award. “It was definitely a long road and along the way, I have really grown as a person and I’m very thankful for that.”

Mike Johnson, now a second lieutenant in the U.S. Army, received two honors. Johnson, a guard, was named the Chase Prasnicki Memorial Award winner as the senior player who best displays the characteristics of the former Army football quarterback and safety. He was the also Army Lifter of The Year after his work in the weight room following knee and shoulder surgeries.

“Over my years here, I have come to learn a lot more about Chase and who he was as a teammate, who he was as a man, friend and a husband,” Johnson said. “To be even put in the same category and the same sentence as a man like Chase is incredibly honoring and humbling for me. I couldn’t think of any better honor.”

Defensive end Amadeo West, who is currently in Basic Officer Leaders Course training after graduating West Point, was the recipient of the Black Lion Award for his leadership and courage.

Army Lifter of the Year (player who performed at high level in weight room): Mike Johnson