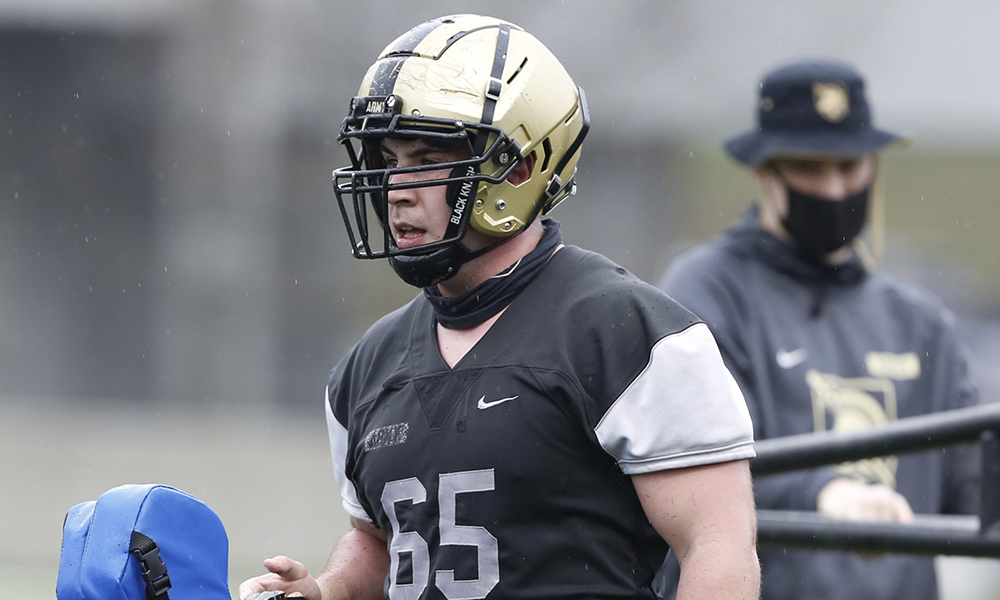 Noah Knapp may have came to West Point for the opportunity to play a higher level of college football.

As Knapp hits the back stretch at the academy, the bigger pictures has become clearer.

When Knapp arrived as a freshman, Bryce Holland introduced him to the MOB (Malicious Offensive Line Brotherhood) culture and mentality. Holland was the starting center and team captain on Army’s record-setting, 11-win team.

“Just being able to learn under him (Holland) and seeing the way he operates and how he held all the guys accountable really left a huge impact on me,” Knapp said. ” What he showed our class continued on and we try to keep that standard in the room as we bring more and more players in every year.”

Now, Knapp is one of the five rising senior offensive linemen and one of the leaders of his position group. Knapp is set on upholding the MOB’s “Five Like One” motto.

“Coach (Brent) Davis talked about this the other day,” Knapp said of Army’s offensive coordinator. “If you want to hit somebody and you have your hands spread out with your five fingers and you are slapping them, it’s not going to do much.

“But when you put those five fingers together in a fist and hit someone, you are going to do some damage. If we can get all five guys on the field at one time working toward the same goal, we are pretty much unstoppable. That’s our goal in everything we do. It’s not just football but offseason workouts, runs, just hanging out on the weekends. ‘Five Like One’ is part of our culture and what we live every day when we are together.”

“I had really good defensive linemen in front of me in all four years of high school,” Knapp said. “Every day, I went to practice I had an opportunity to get better. When you go against better competition, it pushes you to be better than that guy and when that guy is 6-5, 330 pounds, a four-star recruit, you kind of have a chip on your shoulder to tear him up every single play. I think that gave me an edge that I still carry with me today.”

Knapp finished the 2020 season as Army’s starting center in the Liberty Bowl. This spring, Knapp is switching to guard. The move allows Knapp to play faster.

“It’s been different,” Knapp said. “I could always tell you what the assignment is for any of the positions on the offensive line but the actual body positions and how you get to those body positions is a little bit different going from a four-point stance to a three-point stance. It’s been a lot of fun. I get to run off the ball. I feel a little more athletic.”