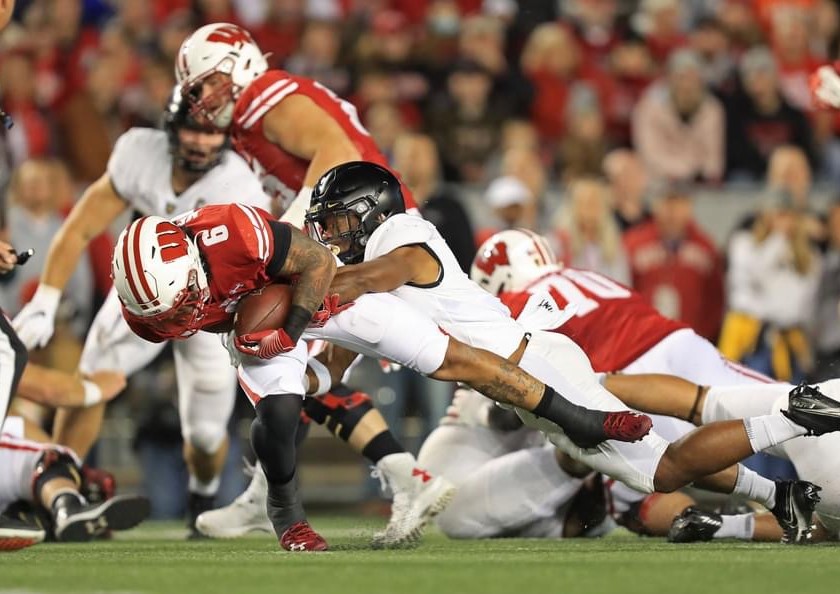 MADISON, Wisc. — Army quarterback Tyhier Tyler spent about 90 seconds on the turf with two trainers and head coach Jeff Monken surrounding him. A crowd of 76,314 that made Camp Randall Stadium shake during the famous Jump Around two minutes earlier was now silent while Tyler was down.

Two plays later, Tyler ripped off Army’s joint-longest offensive play of the night and nearly sparked a comeback in the process.

Ultimately even with the newfound life, the final score was an all-too-familiar refrain. Tyler’s burst led to Army’s first points of the game and pulled the Black Knights within one possession, but it was too little too late in a 20-14 loss at Wisconsin. This six-point loss will join an overtime loss at Oklahoma in 2018 and a double overtime loss at Michigan in 2019 on the list of near-misses for Monken’s teams in road games against power five opponents.

Although Army expected to win and nearly finished off a frantic fourth quarter comeback late, the first half was a grim reminder of the talent differential on the field.

The offense gained just 48 yards of total offense in the first half, and found itself trailing 13-0 at the break off the back of two Wisconsin touchdown drives that both lasted over six minutes. The latter drive was aided by a fake punt when senior linebacker Jack Sanborn took his first career carry for a gain of eight yards on a fourth-and-1. That play directly led to a five-yard touchdown run from Wisconsin quarterback Graham Mertz, and they were the final points the Badgers scored until late in the fourth quarter.

But for everything Army struggled to find in the first half, it made up for with some answers at the quarterback position in the fourth quarter. The Black Knights will fly home from Madison with a much better idea of what it has at quarterback behind starter Christian Anderson after both Tyler and Jabari Laws played their most significant snaps of the season so far.

Laws in particular had not seen action since the Sep. 18 victory over Connecticut and had not attempted a pass since 2019 before he stepped onto the field in Madison. He finished the game 5-for-6 passing with 83 yards, and Tyler wracked up 90 rushing yards on 17 carries in the game.

“I say in every single interview I have when I’m asked about the other quarterbacks Jabari Laws is my best friend on and off the field,” Tyler said about the quarterback rotation. “So it was a special moment for me, and throughout the week we knew we were both going to be rotating. Just being able to be in the game with him and playing with your best friend, that’s bigger than football. I’m happy for him; he stepped up when we needed him to step up.”

Both quarterbacks played a key role in the fourth quarter, but Tyler got everything started just two plays after his injury. He kept the ball himself on a second-and-12 play for a gain of 36 yards off left tackle to move Army into the game for the first time in the game. Three plays later he managed to reverse his field on a bootleg after his passing lane was closed off and improvised for a five-yard rushing score that cut Army’s deficit to 13-7.

“It was a pass play,” Tyler said on the rushing touchdown. “I was right there, I saw I could get it and had to make a play.”

The momentum briefly swung onto the visitors’ sideline with that, but the dagger to the rally came on Army’s next possession. Wisconsin nose tackle Keeanu Benton recovered a Laws fumble at the Army one-yard-line, and Mertz scored on a quarterback sneak on the first play of the ensuing drive. But even down 20-7 into the final minute, Army continued to battle. Laws completed Army’s second 36-yard play of the game on a pass to A.J. Howard down the left sideline, and Howard finished off the drive with a six-yard touchdown run that set up an onside kick opportunity for the Black Knights.

Wisconsin fell on the onside kick with 37 seconds remaining to secure the win, but pushing the game down to the final minute after a lackluster first three quarters was a microcosm of how well Army has battled in these games against power five opponents under Monken.

The program is still chasing down that brand-name road win. It has traveled to every corner of the college football landscape in search of it, and will continue to do so. The 2022 season will open with a road game against a Sun Belt powerhouse in Coastal Carolina, and another trip to a Power Five opponent is lurking with Wake Forest, Army’s opponent next week in a home game at Michie Stadium. A road trip down to Baton Rouge to play LSU is on the horizon for 2023.

Each trip into one of those environments is a learning experience and a chance to further the program’s identity. Saturday night’s excursion to Madison happened to be both.

Army learned more about what is inside the quarterback cupboard behind Anderson in the fourth quarter. An electrifying run from Tyler and a two-minute drill from Laws nearly led the Black Knights to a program-defining comeback victory. That there was a sniff of a comeback after Army’s offense was stuck in neutral for three quarters is an indicator of how well Monken’s program has battled in these games over the years, and why it continues to schedule aggressively.

And when Wake Forest arrives in West Point next week as one of 11 remaining undefeated FBS programs, Army will get an opportunity to finish off a Power Five opponent.

Only this time it will be with a lot more certainty at quarterback.\

VIDEO: Sal Interdonato and Steve Anderson react to Army going to blow to blow with another Power Five team.