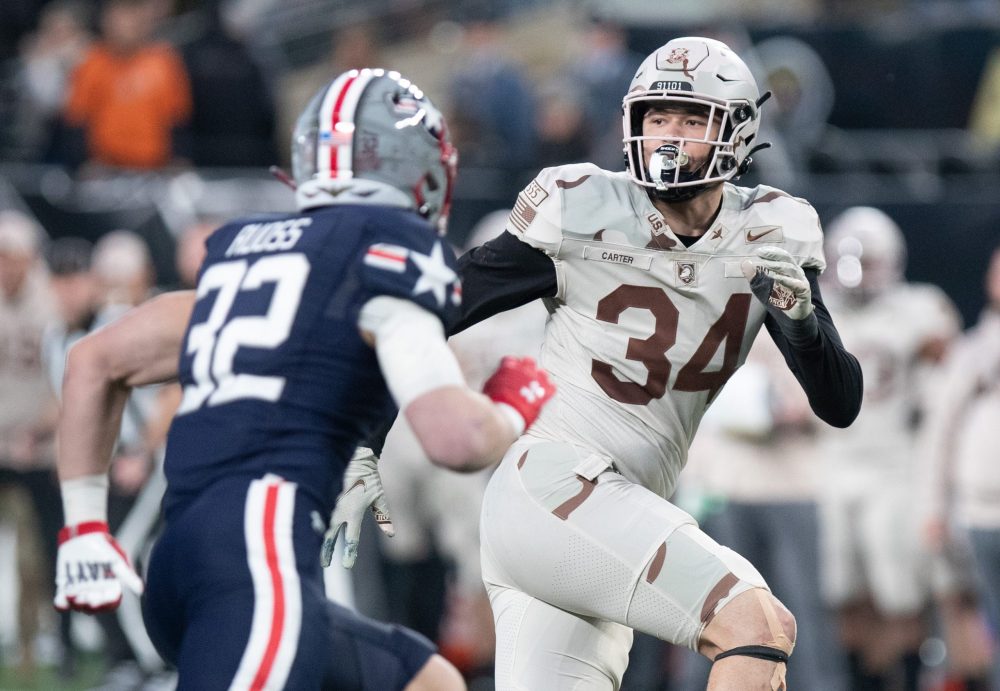 Could Andre Carter be the first NFL first-round, service-academy draft pick in 75 years?

One college football expert believes Army’s senior linebacker has the talent to hear his name called early next spring.

“He’s got the size, length and athleticism to work his way into the first round conversation,” said Mike Renner of Carter in a Twitter post on the PFF College account Thursday.

Carter is coming off the statistically-best, pass-rushing season in Army history. His 15.5 sacks were an academy record and ranked second in the country in 2021. Carter was the first Army player to earn Associated all-American honors (third team) since Mike Mayweather in 1990.

What makes Carter an even more intriguing NFL prospect is his burning desire to improve. Carter often stops by defensive coordinator Nate Woody’s office to watch extra film and is always looking for ways to  add to his game.

Carter’s name is already popping up in mock drafts. USA Today’s Doug Farrar had Carter going to the Miami Dolphins with the 24th pick.

The last first-round pick from Army, Navy or Air Force was 1946 Heisman Trophy winner Glenn Davis with the second selection in 1947.

Army’s Felix “Doc” Blanchard (1946), Tex Coulter (1947) and Davis are the only service-academy, first-round draft picks. Navy Heisman Trophy winner Roger Staubach was picked in the 10th round in 1964 due to a five-year service commitment after graduation. Air Force’s highest draft picks were in the sixth round – center Daniel Palmer (1997) and defensive lineman Jordan Jackson this season.