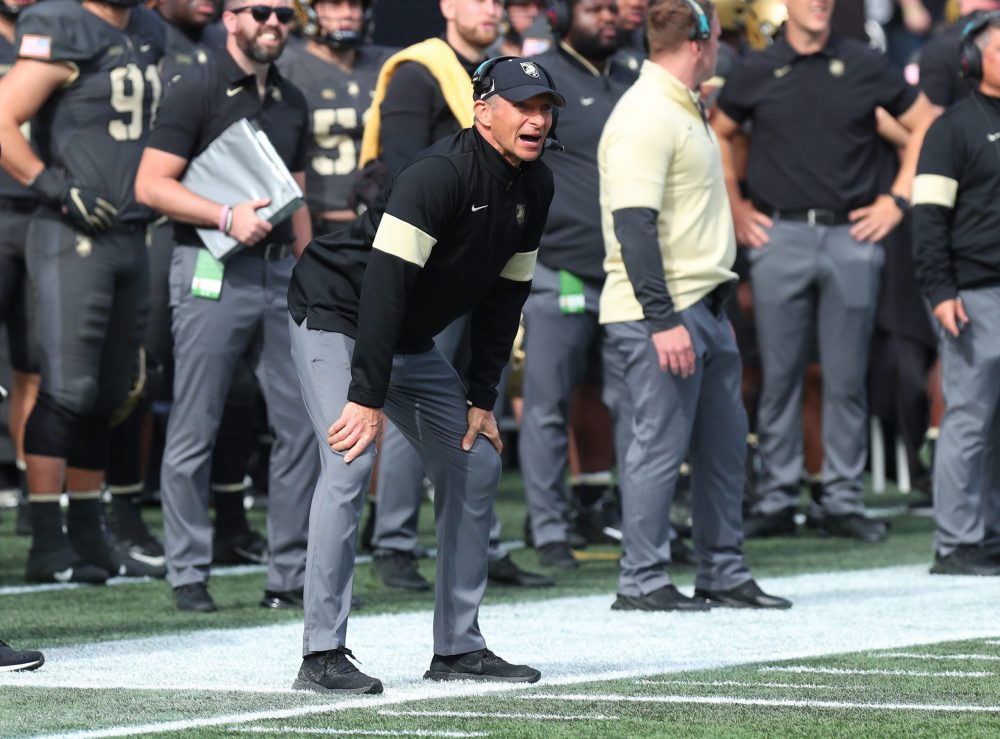 The Black Knights stayed close with Wake Forest, now ranked No. 10, and its high-powered offense.

The outcome did not end in Army’s favor in back-to-back games against Power Five schools.

Next is what coach Jeff Monken references as “the biggest game of the season” to finish the Black Knights’ toughest stretch of the schedule.

Army’s first leg of the Commander in Chief’s trophy Saturday will determine whether the prize for the service academy champion returns to West Point or heads back with Air Force to Colorado Springs.

“The CIC is a source of pride for our program and to have it here a few years in the last four years is a tremendous source of pride for us,” Monken said during his Monday’s press conference. We know the other academies play as hard as they can to capture that trophy as well.

“It means a lot to us. I know it means a lot to our players to this academy and the United States Army that we represent. The bottom line is that it’s one game. it’s a one-game season and we have to do a great job of executing and defending the trophy.”

Army and Air Force will be coming off byes following losses to ranked teams. Army is looking to snap a three-game losing streak. The Black Knights (4-3) will have not won a game in 41 days before 11:30 a.m. kickoff from Globe Life Field in Arlington, Texas. Air Force (6-2) lost to then No. 22 San Diego State 20-14 on Oct. 23. The Falcons defeated Navy 23-3 earlier in the season to put themselves in position to capture the CIC trophy with a victory Saturday.

“It’s a championship week,” Army senior nose tackle and captain Nolan Cockrill said. “We’re gearing up so we make sure that we keep that trophy here. We’re working hard and really hammering down on the fundamentals and everything that leads to success in games like these.

“Everybody is just tuned in and doing everything they can to make sure that they get their job for the person the left and right of them.”

Monken said for what the CIC means to the United States Military Academy, his program and the representation it gives the United States Army that he “doesn’t know if there’s a trophy or an award that’s more highly coveted in college sports than this one.”

“I know conference championships, other rivalries and national championships are awfully big,” Monken said. “But for what it means to us and the 1.3 million people that represent the United States Army, it’s a pretty big deal. It’s a great source of pride. We’re glad it’s here and we’re going to do everything we can & fight our butts off to keep it here.”