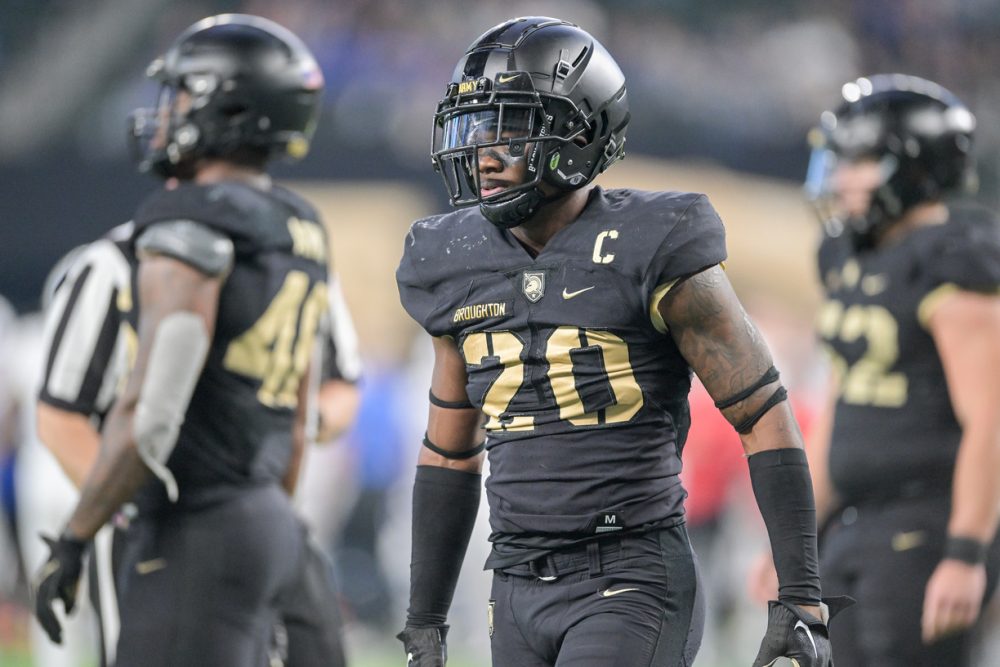 Marquel Broughton accomplished so much on and off the field as a two-year Army football captain and rising to a position a leadership among the Corps of Cadets.

One of Broughton’s most impressive on-the-field moments for the senior safety came during the only game that he missed in his entire football career (youth, high school and college). Broughton helped defensive coordinator Nate Woody call plays against Troy. The Black Knights held Troy, which finished 12-2 and No. 19 in the final Associated Press poll, to 10 points, tying its season low

1. Marquel Broughton: The team’s heartbeat and unquestioned leader. Broughton may have produced his best season statistically (88 tackles, 3 interceptions, 2 forced fumbles). Started 36 of his 37 games over his last three seasons. Would have loved for someone to track the ground that Broughton covered in games against Navy and Air Force. He was everywhere. Broughton’s 244 career tackles are 28th in academy history. His 21 passes defended are tied for 14th all time.

2. Tyhier Tyler: Tyler always left it all on the field for the Black Knights and this season was no different. Great teammate with a special ability to lead team on and off the field. He will be etched in Army’s record books as one of the academy’s top rushing touchdown leaders among quarterbacks. Tyler finished his career tied for third with 24 scores. Led the team in rushing for the second time (2020). Started at slotback in his final game against Navy and was the team’s leading rusher.

3. Leo Lowin: Lowin registered Army’s first 100-tackle season since Cole Christiansen in 2019, with many of the junior linebacker’s stops covering sideline to sideline. His 16 tackles earned Lowin the most valuable player of the Army-Navy game. Lowin was excellent at reading schemes and calls. Four different players started alongside Lowin at inside linebacker during the season. Lowin still made big plays including three sacks, two interceptions, a forced fumble and a fumble recovery.

4. Andre Carter: Carter’s numbers didn’t match his 2021 all-American season but the attention that the linebacker and future NFL draft pick attracted helped others make plays. The senior constantly faced double and tripl3e teams on pass rushes and still topped the team in tackles for loss (7) and sacks (3.5). Carte, a 2023 potential NFL draft pick, fought through injury at start and middle of the season and finished strong.

5. Jemel Jones: The consummate teammate. Third on the depth chart to start the season, Jones stepped in midway through the season and guided Army to wins over Colgate and Louisiana-Monroe in games No. 6 and No. 7. The senior’s seven rushing touchdowns were second on the team.

6. Josh Lingenfelter: Lingenfelter, a junior tight end, could be the next Army player to receive a serious look by NFL scouts. Lingenfelter’s elite blocking was evident on Markel Johnson as he opened up a cutback lane for the fullback to score in the first overtime of Army’s win over Navy. Lingenfelter’s targets were limited in the passing game (3 receptions, 105 yards) but that could change in new offensive coordinator Drew Thatcher’s shotgun offense.

7. Ay’Jaun Marshall: When Marshall touched the ball, big plays happened. Marshall averaged 10.7 yards on 24 carries and 34.7 yards on six catches. He had seven plays of more than 20 yards including four receptions of 31 or more yards. Marshall topped the team with two receiving TDs. Expect Marshall to have an increased role in Army’s new gun option.

8. Quindrelin Hammonds: Hammonds stepped up to fill the graduation of co-captain Cedrick Cunningham with a solid 2022 season. One of Army’s biggest hitters, he was fourth on the team in tackles with 52, broke up three passes and forced a fumble. Hammonds played the Navy game with a cast on hand and made six tackles including one for a loss.

9. Connor Finucane: Finucane started every game for the second straight season. When Army was banged up with injuries at tackle, the junior right guard moved to the outside and was effective. A student of the game, Finucane may be Army’s starting center next season.

10. Jimmy Ciarlo: Ciarlo answered the call this season, replacing two-year starter Malkelm Morrison at the hybrid apache position. He was the only defensive player to start all 12 games. Ciarlo always seemed around the football. He had a career-high nine tackles in Army’s win over Navy.