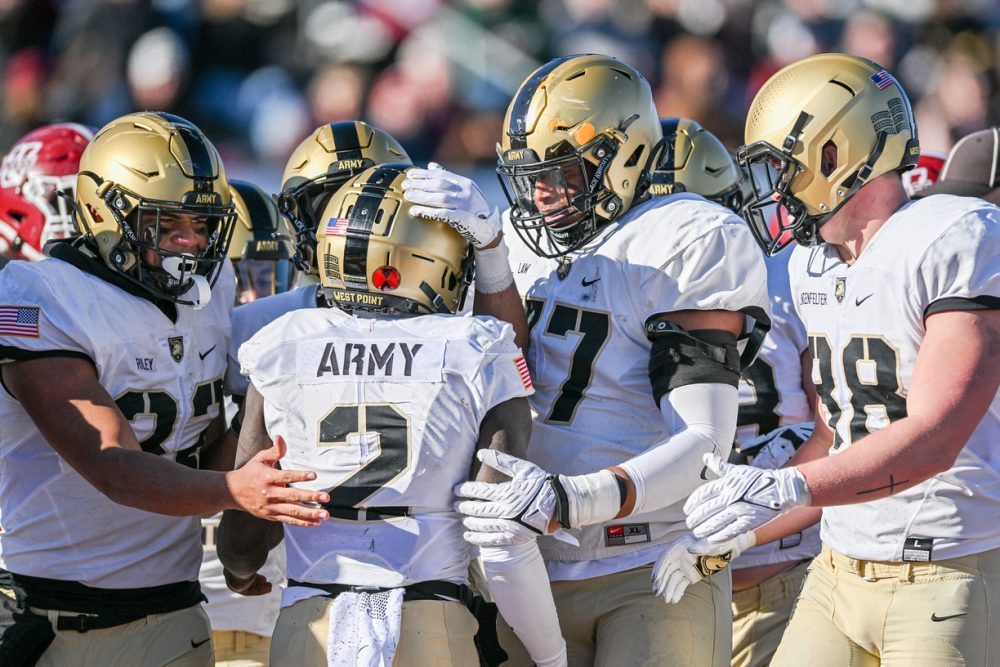 With the Navy game just two weeks away, Army played its best offensive and defensive game of the year Saturday, handing undermanned Massachusetts a 44-7 defeat at McGuirk Alumni Stadium in Amherst, Mass.

After giving up a Minutemen touchdown on the game’s first drive, the Black Knights took total command, driving for four touchdowns in the first half and three in the second half. The defense, which had only given up 40 points in its previous three games, held UMass to just that one score, forcing four turnovers and stopping the Minutemen on four straight plays within the 3-yard line midway through the third quarter.

In total, Army rushed for 329 yards, passed for 67 yards, including an amazing one-handed 23-yard grab by Isaiah Auston that set up the first Black Knights score and held UMass to just 294 total yards from scrimmage during the game. UMass finished its season at 1-11, with its one victory coming against FCS-level Stony Brook early in the season. Army earned its first road win of the season.

Combined with an impressive win over UConn last week, this victory definitely gives the Black Knights solid momentum as they gear up for their annual tussle with Navy on Dec. 10 in Philadelphia. It also keeps Army’s slim hopes of receiving a post-season bowl invitation alive, though the Black Knights, now 5-6, will have to hope that they can beat Navy and find a bowl game that will still have a spot open for them. Bowl bids are handed out in the week before the Army-Navy game.

“I thought we did some good things the last two weeks,” said Army coach Jeff Monken. “There are still things we need to do better. I am, probably to a fault, critical of things we don’t do well, but there has been a lot of good things. It is nice to win these two games (UConn And UMass). We really needed to win these games.

“There is not a bigger game on our schedule, ever, in any season than the one that is coming up. This games looms for 365 days. It is part of the DNA of this program and this institution to beat Navy. It is a big game. We have a lot of work to do and a lot of improvements we need to make. We will have to play very well.”

Army did play very well against UMass, at least after the opening Minutemen drive and it was a team effort on both sides of the ball, including solid blocking by the offensive line. Starting quarterback Tyhier Tyler, one of four quarterbacks used by Army in the game, rushed for three touchdowns in the first half, including a 27-yard run that put the Black Knights up for good 13-7 on the first play of the second quarter.

Tyler, who now has 24 career rushing touchdowns, tied for third all-time among Army quarterbacks with Kelvin Hopkins, rushed for 101 yards on 11 carries plus his completion to Alston and a second pass to tight end Josh Lingenfelter for 44 yards that set up Army’s last touchdown of the first half.

Jakobi Buchanan, still recovering from lingering injuries early in the season according to Monken, rushed for 46 yards on 11 carries and scored twice for the Black Knights.

“(Buchanan) is playing hard and giving his best effort,” Monken said. “He is still a load to tackle. 280 pounds is a lot of fullback to tackle.”

Sophomore Bryson Daily, the only non-senior Army QB to play in the game, had a 54-yard run for paydirt late in the fourth quarter to close out the scoring.

“I wanted us to play our best,” said Monken. “I don’t know if we played the best we are capable of playing but I thought our guys played hard and certainly, at times, played very well. The goal line stand by our defense again was a really nice job. And that was a great catch by Isaiah. We got the ball going there in the second part of the first quarter and moved it well right through the first half.”

Army was thin at slotback Saturday as Tyrell Robinson (season-ending injury against Wake Forest), Ay’Jaun Marshall and Miles Stewart missed the game. Tyson Riley, Army’s leading rusher as a fullback, started at slotback and took the majority of his snaps there. The Black Knights were also without starting cornerback Bo Nicolas-Paul.

As it did with UConn last week, Army won the turnover battle on Saturday. Plebe cornerback Jaydan Mayes picked off a Brady Olsen pass to stop a UMass drive early in the fourth quarter.

“It feels great,” said Mayes. “I was put into the position and had the opportunity to make the play. When I did, it just feels overwhelming.”