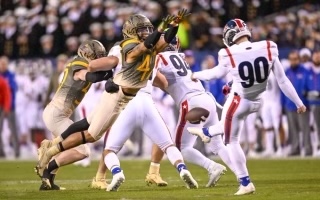 Philadelphia – As the seconds ticked closer to halftime, Army seemed destined to head to the locker room scoreless.

Army’s offense had managed just 33 yards (all rushing) on 19 snaps. The Black Knights needed some play, any play to change the momentum against Navy. And, they received it from an unexpected source.

Freshman Noah Short was itching to play in his first Army-Navy game. But, Short wasn’t sure he was going to see the field. Short was second string on the Black Knights’ punt block team.

When Jimmy Ciarlo was banged up playing defense, special teams coach Sean Saturnio told Short it was his turn. Short didn’t want to jump offsides on his first play, timing up his rush.

The seas parted on Short’s second chance. Short had a clear run at Navy punter Riley Riethman and didn’t miss, blocking the football. Jabril Williams, Short’s classmate, bobbled the block near the goal line but he managed to keep his body and ball inside the back of the end zone for Army’s first points and second special teams touchdown in three games.

“I went a little bit late (on his first punt block attempt) but I felt the crease and I’m like, ‘It’s there for sure,'” Short said Sunday, one day after Army’s 20-17 double-overtime win. “The second one, ‘I was like I’m just going to try and jump it.’ It worked out perfect, just blocking it and seeing that we scored. When I was in the corner of the end zone, I didn’t feel real. I was like, “Did I actually just block that punt?”

That Short did. Short said he watched video of the block “30-40 times” as family and friends sent him messages. The significance of Short’s effort shouldn’t go understated. The punt block was Army’s only touchdown in regulation.

“Every time you watch it, you relive it a little bit and get some goosebumps,” Short said. “It’s definitely something I’m going to cherish forever.”

Short rotated on the edges of Army’s punt block team during the second half of the season. He was moved to the middle this week. Short credits Williams for his game-changing play. Navy’s scouting report no doubt had Williams’ punt block and score against UConn last month.

“(Navy) were scheming for him this week,” Short said. “Whenever there’s attention outside of your position, it helps you out. It opens up space.”

As for the recovery, Short jokingly said he would’ve needed to have words with Williams if he wasn’t inbounds. Army coach Jeff Monken said the play certainly changed the game’s complexion.

“We got to work on fumble recovery,” Monken said. “He (Williams) was so excited. He just managed to stay in. Thank god, he stayed in. We don’t win the game if he doesn’t.”