Quinn For The Win, Army beats Navy in 2 OT 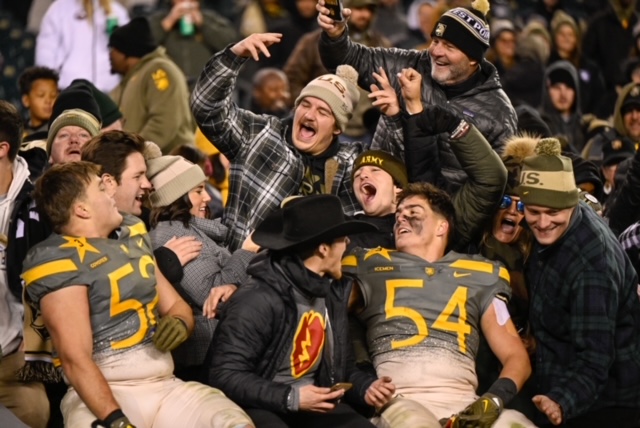 Army coach Jeff Monken has said all year that the team that wins the turnover battle usually wins the game. That is particularly true when it comes to playing arch-rival Navy.

On Saturday, before 69,117 fans at Lincoln Financial Field in Philadelphia, Army recovered the only turnover of the game on a goal-line stand in the second overtime, thwarting a Navy drive. Moments later, Quinn Maretzki hit a 39-yard field goal to give the Black Knights an incredible 20-17 victory over the Midshipmen in the first overtime game in 123 meetings.

“What a win, what a game,” said Monken, who is now 5-4 against Navy. “Give credit to the Navy team and how hard they fought. I’m incredibly proud of our team and proud of our senior class. This was not a great season for us. We are accustomed to winning a lot of football games and playing in the post season and holding on to the Commander-in-Chief trophy.

“But this team never stopped fighting and never stopped believing. It is a credit to the senior class. They kept playing and somehow, someway they found a way to get it done.”

Maretzki was one of many heroes on Saturday for Army. He kicked a 37-yard field goal with 3:28 left in the fourth quarter to even the score at 10-10 and, ultimately force overtime. For the Army junior, the two field goals were redemption for a missed field goal against Troy that would have given Army a victory against the Trojans in November.

“I was wide right against Troy and it was really tough to let the team down that way,” said Maretzki. “I am really grateful to the team and the coaching staff to put their trust in me and the team for putting me in the position to do it again.”

The victory gives Army a 6-6 record on the season, while Navy finishes its campaign at 4-8. Navy won last year’s game at MetLife Stadium in the Meadowlands, 17-14. Army has now won five of the last seven games between the two archrivals.

The bottom line is that this was a game of two teams that truly understood their opponents’ offensive scheme and have for years. Navy scored just one touchdown in regulation – a 77-yard run by Anton Hall Jr. – and one in overtime, a 25-yard pass from quarterback Xavier Arline – the Midshipmen’s only completion of the game – to a wide-open Maquel Haywood that knotted the score, 17-17 and force a second overtime.

Army’s offense was worse. Including overtime, the Black Knights managed just 153 yards (125 on the ground and 28 in the air) and their only touchdown came on the first play of overtime when Markel Johnson broke through the Navy line and ran 25 yards for paydirt. Amazingly, it was the first offensive touchdown by an Army player against Navy since the first quarter of last year’s game when Christian Anderson scored to put the Black Knights up 7-0 in that game and only the fourth Army offensive touchdown against Navy in the last four games.

While the Army offense sputtered, the defense was, once again, playing a strong game. Army has given up just 57 points in its last five games. Led by a wide range of players, including game MVP Leo Lowin, who had 16 tackles, and Chris Frey and senior captain Marquel Broughton (each with 10 tackles), the defense kept Army in the game throughout. Navy was forced to punt nine times in the game.

“We bend but we don’t break, that is what we have been saying all season,” said Lowin. “Navy’s got a good team with some very good players. But as long as we don’t break and don’t give up the big one it gave us a chance to win the game.”

The fact that Army actually went into halftime leading 7-3 was amazing and a testament to its defense. The Black Knights managed just 33 yards from scrimmage in the first half, registered just one first down and were forced to punt four times. But specialty teams bailed Army out when freshman Noah Short blocked a Navy punt and classmate Jabril Williams fell on the ball in the end zone to give Army a four-point lead with just 1:06 left in the first half.

Before that, it was a slow start offensively for both teams, especially for Army. Twice Navy drove into Black Knight territory in the first quarter only to be forced to punt each time. Meanwhile Army ran just four plays in the first quarter and did not register its only first down of the half until about eight minutes remained in the half.

The Midshipmen, who were held to 111 yards in offense in the first half managed to score first, when Bijan Nichols hit a 44-yard field goal to put Navy ahead, 3-0 with 12:36 left in the second quarter.

Army had its chances in the third quarter to fatten its lead. On its second possession of the half, quarterback Tyhier Tyler had a 40-yard touchdown run called back for an illegal block. Several plays later, with the Black Knights within at least field goal range on the Navy 30, two consecutive fumbles – both recovered by Army – left the Black Knights well out of field goal range, forcing a punt.

Conversely, Navy did not let its next chance slide by. On its first play after the punt, sophomore fullback Hall galloped for 77 yards to put the Midshipmen up 10-7 with 4:09 left in the stanza. The run was the longest run from scrimmage by a Navy player in the 123-year history of the Army/Navy game.

“This team never stopped fighting,” added Monken. “We found a way to get it done tonight.”