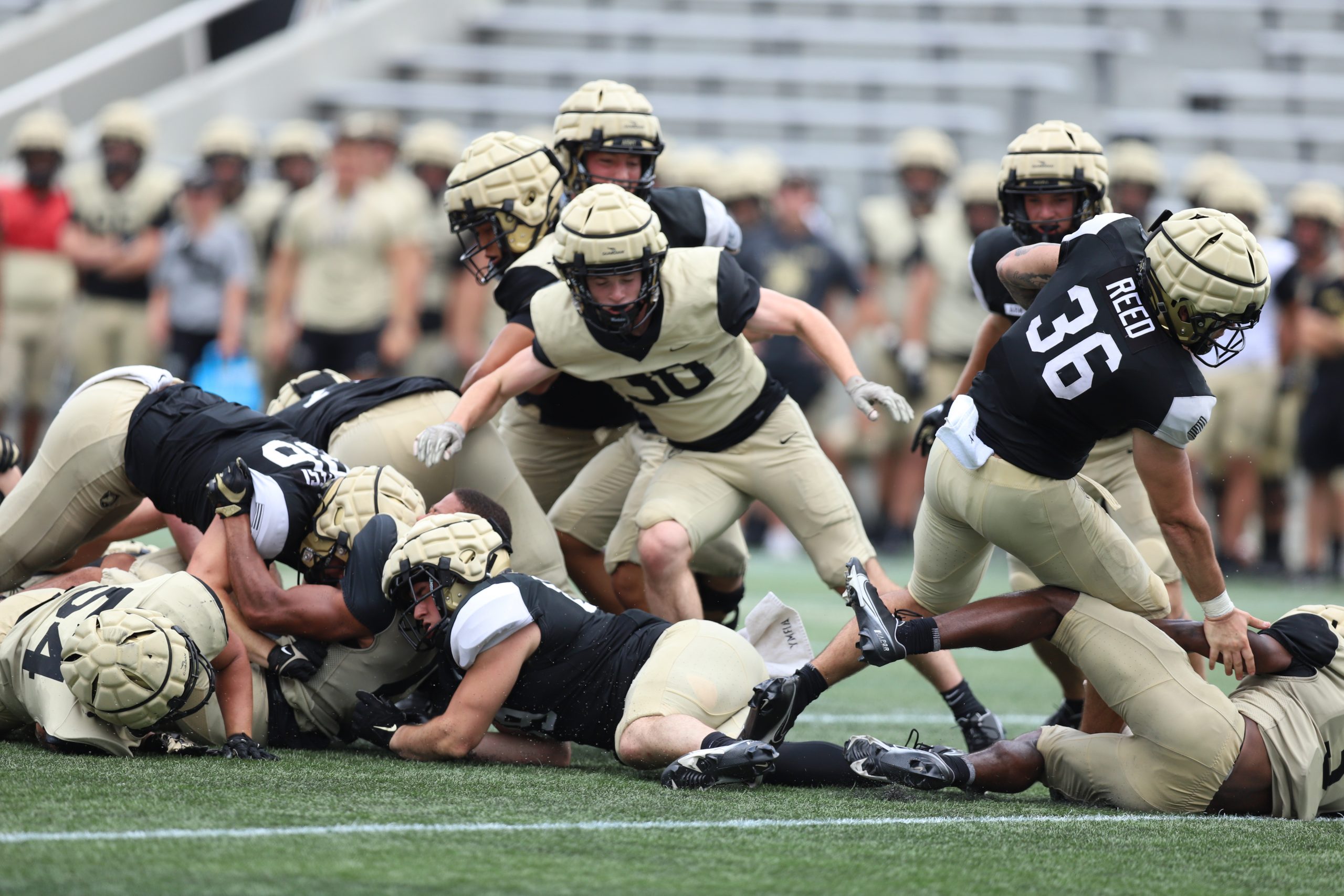 One week ago, Hayden Reed was competing with and against Army’s freshmen following a scrimmage of the team’s returning players.

Reed was promoted to the Black Knights’ working travel squad this week for his efforts. And, the fullback continues to impress coach Jeff Monken. The 6-foot, 226-pound freshman celebrated with his more experienced teammates after scoring a 4-yard touchdown during the team’s second preseason scrimmage Saturday.

“It’s a really good feeling especially having all my boys meet me in the end zone and hyped me up,” said Reed of his touchdown after the scrimmage. “Coach (Blake) Powers and I have been working on the fundamentals, just the basics and getting a good foundation under my feet. I’m just working on that and growing with it.”

If Reed continues to show improvement, he could be one of the few freshmen on the trip to Coastal Carolina for Army’s season opener on Sept. 3. Army is looking for younger fullbacks to step up behind Jakobi Buchanan and Tyson Riley.

Sophomore Markel Johnson, who has impressed, was injured in practice this week and held out of the scrimmage as a precaution. Sophomores Lucky Brooks and A.J. Williams are injured and sophomore Jarel Dickson was unavailable due to family situation, Monken said.

Reed, who played at Army Prep last fall, and sophomore Bo Kite made the most out of their extended snaps Saturday. Kite broke out a 37-yard touchdown.

While Monken said fullbacks “ran the ball hard”, ball security was an issue with the younger players during the scrimmage.

“All those guys were freshmen with the exception of one that was a sophomore so that’s got to improve. It’s good that happens. They have to know there’s a sense of urgency there.”

Inside linebacker competition: Monken said nothing “is set in stone” with the two starting inside linebacker positions two weeks away from the opener. Senior Peyton Hampton, juniors Leo Lowin and Spencer Jones and sophomore Kalvyn Crummie are competing for the spots. Army has also moved sophomore safety Adam Cash and senior outside linebacker to the inside.

“I think there’s a lot to be discovered between now to the time that we play on Sept. 3 at the inside linebacking positions,” Monken said.

Marshall continues strong preseason: Junior slotback Ay’Jaun Marshall scored Army’s first touchdown on a run. He caught 36-yard touchdown pass from Cade Ballard. Marshall found the end zone again, catching a two-point pass. He talked about having a full spring and preseason camp to get ready for season in a video below.

Two weeks away: Monken said Army has “so many fundamental things that we have to get better at” and he’s “glad we have two more weeks (until the season opener) and we are going to take advantage of every opportunity that we got before we play.” Monken cited six missed tackles on the defense’s first possession.

Scrimmage observations: Sophomore safety Tommy Zitiello made a nice interception near the sideline early in the scrimmage… Sophomore defensive end Andre Miller blocked an extra point attempt and was rumbling down the sideline before coaches blew the whistle. Pretty sure Miller reached the opposite end zone any way…Senior outside linebacker Fabrice Voyne recorded a sack…Junior kicker Quinn Maretzki is hitting the ball well in the preseason. Maretzki made field goals of 38 and 26 yards…A scout from the Kansas City Chiefs attended the scrimmage, making it 17 NFL teams that have stopped by West Point to see all-American linebacker Andre Carter…Among the other freshmen dressing with the travel squad were DE Kemari Copeland, LB Eric Ford, NT Jacob Tuioti, CB Donavan Platt, LB-S Noah Short, WR Taylor Saulsberry, RB Jofranstar Graham and S Casey Larkin…Freshman fullback Hunter Roddy scored on a short touchdown run, lining up with the travel squad.

Freshmen scout-team players got their chance to shine at the end of the scrimmage. Dewayne Coleman hit slotback Greg Daniel with a 20-yard TD pass over the middle. Jacob Azizi had short touchdown passes to wide receiver Liam Fortner and tight end Patrick Hester.