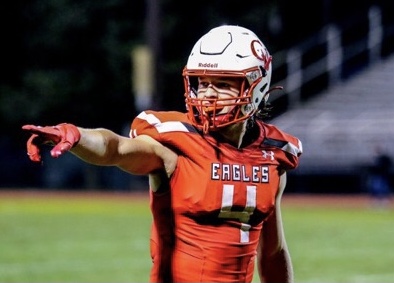 Troy Collard has yet to take his official visit to West Point but the Cumberland Valley (Pa.) tight end is no stranger to the academy’s grounds.

Collard has visited his brother, Jack, a firstie, and his cousin, a West Point graduate, multiple times. He attended his brother’s Acceptance Day.

In four months, Collard will be headed to West Point to start his own journey and a change in his college decision.

Collard announced his decommitment from Air Force and commitment to Army Tuesday.

“I’ve always had the desire to serve my country and I think West Point is an amazing school with an amazing football program and it just made the most sense for me,” Collard said.

Collard will continue his family’s deep Army history. His father is an Army colonel. Collard’s grandparents served in the Army. He also has a brother, who is in the ROTC program at MIT.

“I want to serve my country and my entire family is Army,” Collard said.

*Will be direct admit