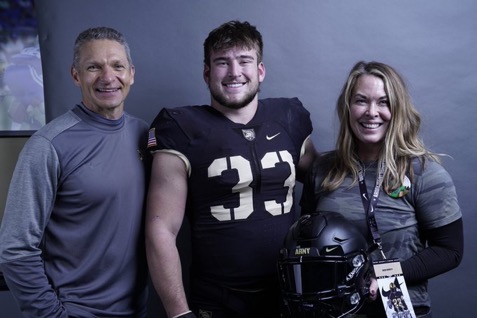 Jake Rendina knew getting noticed or discovered by Division I college football coaches was going to more difficult than most.

Montana, where Rendina plays for Glacier High School, isn’t the most recruited state. But, Rendina wasn’t going to let that stop him from fulfilling his dream. He needed to get his name out there.

“No joke, every single college in alphabetical order,” said Rendina, Army’s recent commit. “I realized that being from Montana it’s extremely hard to get recruited and I was not about to let that prevent me from going to college to play football.”

Rendina also posted videos of his most craziest lifts to try to get attention. Ironically, Air Force was the first Division I-A school to show interest and offered Rendina in February. Less than a week later, Army offered.

“From there, I built a relationship with various (Army) coaches in the program and the rest was history,” said Rendina, who would also receive an offer from Navy.

Rendina, who is being recruited to play fullback, committed to Army coach Jeff Monken and position coach Mike Viti Monday. He visited West Point for the UMass game on Nov. 21. Rendina may be Army’s first Montana commit. Ever.

“I think the fit and feel of the campus when I came in my official visit just felt so right,” Rendina said. “It’s tucked away in the woods just like here in Montana. The students seemed lively and smiling. All of that combined, I knew I wanted to make this place my home.”

Rendina’s social observations drew him to Army during his visit.

“What impressed me was that the students and staff were lively people,” Rendina said. “Not at all like robots, which was one of my fears. They were genuinely nice people.”

Rendina said all three service academies had very similar recruiting styles but for him, “at Army, it was the relationship I built with the coaches. It was the constant, thoughtful letters and postgame calls. (It) made me feel wanted in ways no other school did.”

The 6-foot, 238-pound senior fits the mold of a power runner in Army’s offense. Rendina currently tops the nation’s powerlifting rankings in the 220-pound division for 17-year-olds. He holds the Montana state records in squat (575 pounds), bench (405) and dead lift (606).

Rendina has been productive in his last two seasons at Glacier, scoring 53 touchdowns and accounting for 2,860 yards.

Off the field, Rendina is a true Montanan, he says. Rendina likes to hunt, fish and hike.

“I work every Sunday at a lumber yard, stocking bins and I love a good country-fried steak,” Rendina said.

Perhaps, something to add to the West Point mess hall’s menu.