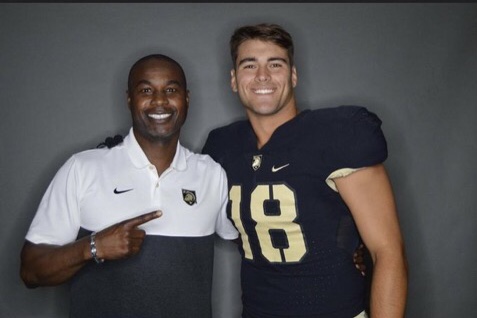 Dillon Stowers wanted Jeff Monken to be the first to find out about his college football decision.

“I told him I wanted to Beat Navy next year,” Stowers said.

Soon after, Stowers received a call from Keith Gaither, his Army recruiting coach, and texts from other members of the staff congratulating him on his commitment.

“I just felt like a weight was lifted off me and now I’m excited,” said the 6-foot-4, 235-pound Stowers, who plays linebacker and tight end for Liberty Christian.

Gaither started recruiting Stowers in the spring while he was playing baseball. Stowers was extended an invitation to attend Army’s Knight on the Hudson recruiting event earlier this summer.

“Everything was awesome,” said Stowers, a third baseman and pitcher who also received Division I baseball offers. “It was like a family that came together. We had a cookout on the field and it was just more than football.”

Stowers visited Navy the next day. Army was first to contact Stowers before Navy. Stowers’ decision came down to Army and Navy, he said. Stowers was recruited by most Ivy League schools and also received an offer from Division I-AA Bryant and Campbell.

“Army stood out because they brought back some alumni to talk to us about how great it was and really showed that you’re family for life,” Stowers said.

John Patterson, another West Point alumni and Stowers’ high school principal, also guided him through the college process before and after Army’s offer.

“He was the one who really talked to me and assured me that it’s a great place,” Stowers said. “He’s been encouraging the whole time and reminding me to beat Navy.

Stowers will remember those two words forever from that call with Monken and now his football and college future.