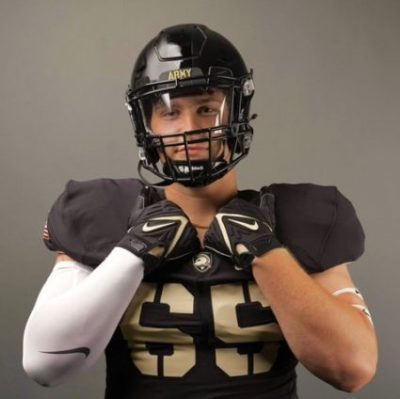 The Army 82nd Airborne football jersey that Paolo Gennarelli was given by his father in middle school now fits like a compression t-shirt.

Army-Navy games were always Gennarelli’s favorite to watch during the college football season. Army’s 2017 14-13 snowstorm win is one of Gennarelli’s most-liked games.

Maybe, it was fate that Gennarelli received his first Division I-A offer from Army.

The 6-foot-3, 285-pound St. Charles (Ill.) North offensive lineman announced in April his offer on Twitter that included the following, “beyond grateful for all those who attended in the past and served our country.”

“After looking into the opportunity more and my visit, it made it impossible to say no,” Gennarelli said. “Talking to the alumni at the end of my visit might have been what sealed the deal that it’s a brotherhood I need to be apart of.”

There’s a tradition of service in Gennarelli’s family going back to his great uncles. Finishing his recruitment opens Gennarelli’s focus on the near future and beyond West Point.

“(There’s) an excitement to be a part of something bigger than just football,” Gennarelli said. “I’m eager to get to work on my senior season and eager to get back on campus.”

Gennarelli, the first Illinois player in Army’s 2022 class, was also offered by Wyoming.