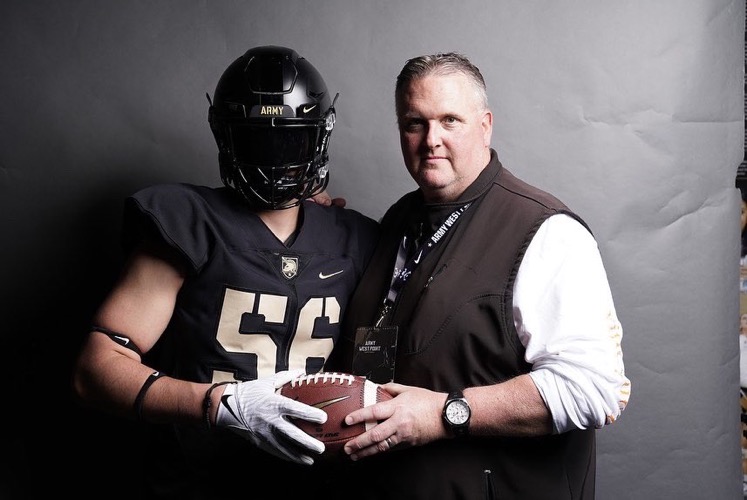 Sean Donovan’s social media post was filled with appreciation to his family and coaches past and present.

Donovan announced his commitment to Army football Wednesday. The Hotchkiss School (Conn.) defensive end thanked his brother, D.J. for pushing him to “become a greater athlete and better person.”

D.J., a Navy rising sophomore, plays the raider position for the Midshipmen’s defense.

How did Donovan’s brother react to his Army commitment?

“He was supportive at first but you know how brothers get,” Sean Donovan said. “He started talking trash and his teammates are getting on me too. I think it’s hilarious.”

Donovan is the third commit of Army’s 2023 recruiting class. All three are defensive lineman. Donovan’s first Army sports experience wasn’t for football. Donovan participated in the Black Knights lacrosse camp last summer with the hopes of being recruited to play for Army’s highly-ranked Division I program.

When that didn’t work out, Donovan never lost hope of attending West Point. He was planning on going through the academy’s admissions process without sports.

That was until earlier this month. Army linebackers coach John Loose followed Donovan on Twitter and connected with him out of the blue. After some talks with Loose, coach Jeff Monken called Donovan with his first offer on April 11.

“I wanted to commit right then and there but I had to call my parents first and thought it was a good idea to visit,” said Donovan, a 6-foot-2, 230-pound defensive end.

Donovan visited West Point on April 16, one of Army’s Junior days. He called Loose three days later on Tuesday with his commitment.

“After seeing the amazing facilities and getting a taste on the team culture, I knew I belonged there and would do great things there,” Donovan said. “Knowing how prestigious West Point is I could not pass this opportunity.”

“I was truly impressed how the teams went against each other,” Donovan said. “I love it and live for that intensity and is one of the many reasons why I committed. I can truly see myself being on that field and banging pads with my teammates. Also, the culture in the weight room I loved. Overall, the all-around competitiveness is what I loved.”

Donovan, who has a 4.4 grade-point average, is Army’s third 2023 commit. He played defensive tackle and left guard for Hotchkiss in 2021. Donovan received the team’s George A. Goss Jr. award, given to the player that contributes the most through attitude, effort and spirit. He earned a similar honor for the 2021-22 wrestling season.