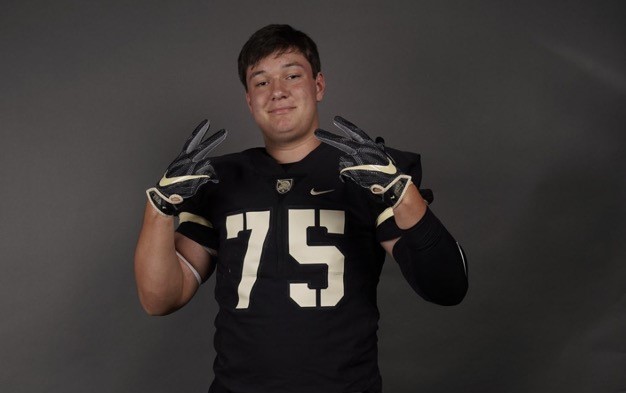 Jacob Benjamin was sitting in his car when a text flashed on his phone Friday.

Army coach Jeff Monken was returning a message saying he could take Benjamin’s call while on vacation.

Benjamin called Monken with his commitment to Army, completing a seven-month recruitment.

Benjamin still vividly remembers the phone call he received in January with his first offer from Army.

The thought of playing high-level Division I football was starting to come into Benjamin’s focus a few months earlier. Army’s offer was “shocking” but it also was a sign of reality.

Army would continue to strongly recruit Benjamin with offensive coordinator Brent Davis and quarterbacks coach Cody Worley staying in touch as 19 more schools from Division I to Division II, including Air Force, would offer. Worley stopped by Cherokee Bluff for a chat and set up an unofficial visit for Benjamin.

“I was shell-shocked by the facilities,” said Benjamin, who also talked with Davis on how he could fit with Army’s offense during the visit. “The weight room, stadium and fields blew me away. On top of that, the staff at West Point have showed an immense amount of love for me.”

Benjamin would return for an official visit in late June. He met current Army players including junior offensive lineman Jackson Filipowicz, who also played his high school football in Georgia. Army’s “downhill style of play” is a good match for Benjamin’s talents, he said.

“It’s an offense that says, ‘We’re going to run straight through you and there’s nothing you can do about,'” Benjamin said. “I felt it was a place I’d fit in. The energy in the weight room was amazing and everyone was very real and honest. They showed me an amazing time and reassured me in a lot of crucial areas. We asked the tough questions and West Point always delivered.”

“What really did it for me was the crazy benefits you get from going there,” Benjamin said. “Alumni networks, financial options and on-the-job experience is unmatched by any schools I talked to, even the Ivy Leagues in my opinion.

“After the trip, I took a week to look at a few other top schools including top Patriot League and Ivy League schools, I ended up coming home early because it didn’t take long for me to feel confident that there was no school that could stand up to West Point in my mind.”

“I have many members of my family that have served in the Army, Navy and Air Force,” Benjamin said. “Military commitment was never a worry for me. I would love to be in a position where I can make a difference in this country and I believe there’s no better place to do it.”