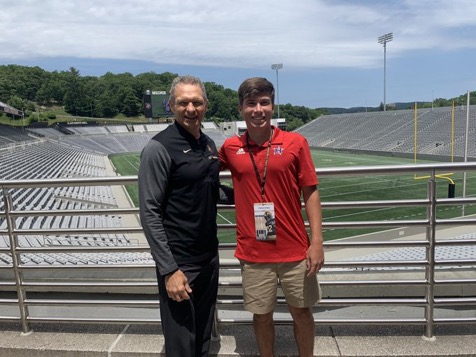 Anderson Britton’s kicks may have added a little distance during his workout Thursday.

One of Britton’s first workouts since his commitment to Army came with a reminder. The Heritage (Ga.) kicker still has one more high school season to play before heading to West Point.

“It’s funny, I have been wanting to workout and kick more since committing,” Britton said. “But, I have to be careful and focus on the quality of reps rather than quantity. I’m trying to focus on the specific areas where I need to improve.”

“I can play football, get a great engineering education, learn leadership and life skills, serve my country and have a great future,” Britton said. “It was an easy choice.”

Britton’s relationships with Saturnio and Army’s coaching staff were one of the reasons for his commitment.

“I really started talking to coach Saturnio over the past couple of months,” Britton said. “He’s a great guy and really made me feel like he was truly interested in me as a person and helping develop me as a man. For him, it wasn’t just about football.

“I felt a good connection with everyone from coach Monken to all the coaches and players that I met. You start to see what they mean by ‘brotherhood’ really early on.”

Britton started kicking when he was nine years old. He was one of the players that raised his hand when coaches asked if anyone wanted to kick. The rest is history as Britton has been Heritage’s starting kicker for all three of his years.

“I just had a gift for it,” Britton said.

One interaction with Army’s coaching staff stood out on the opportunities ahead for Britton during his visit. Several of Britton’s relatives have served in the military but he hadn’t thought about the idea until Army started recruiting him.

“While we were the visit, one of the coaches said that no other school had had more people make an impact on the growth and development of our country and I thought that was big,” Britton said. “I was talking to few other schools but didn’t have any offers from others. It really was such a great fit I didn’t feel like I needed to drag it (recruiting) out.”