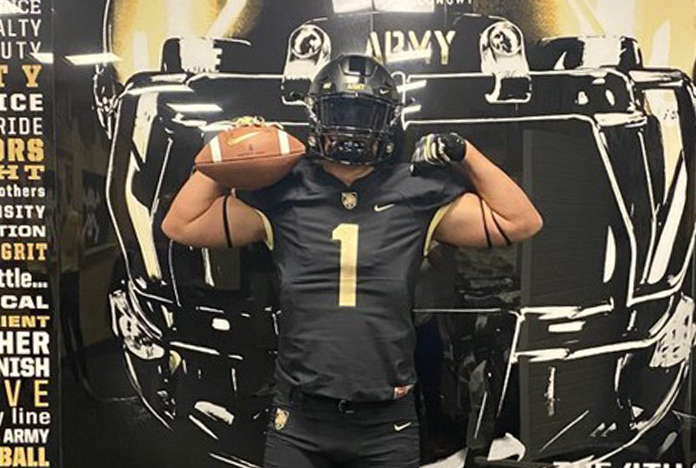 The conversation between Wilkinson and his future position coach went so long that it threw off some of the visit’s itinerary. Drinkall skipped a camp to come and meet Wilkinson.

Once Wilkinson found that out, the New Smyrna Beach (Fla.) tight end knew that he was a recruiting priority and West Point was the place that he wanted to play his college football.

Wilkinson gave Jeff Monken his verbal commitment Sunday with his parents John and Maura in the head coach’s office.

“I was always thinking about it (committing),” Wilkinson said. “The opportunities that West Point has are huge. My parents were sold from the start. They made me feel like family on top of their top-tier facilities. They blew out my expectations.”

Wilkinson learned more about the position he will play for the Black Knights through his talk with Drinkall.

“I found out tight end is the most versatile position on the field in this offense,” said the 6-foot-3, 235-pound Wilkinson. “You can play tackle, receiver, H-back or just be a tight end.”

Wilkinson grew playing quarterback for most of his life until a growth spurt his sophomore year. John Wilkinson, his high school coach, moved his son to tight end.

“He’s been pushing me to be tough and be nasty since I came in as a freshman,” said Wilkinson of his father. “I think the way he has pushed me in the classroom and on the field my whole life will help me at West Point.”

“There were other schools but Army was always No. 1,” Wilkinson said. “Looking past football, which is already top tier, you can’t compete with the education you are getting to better your life for the future.”