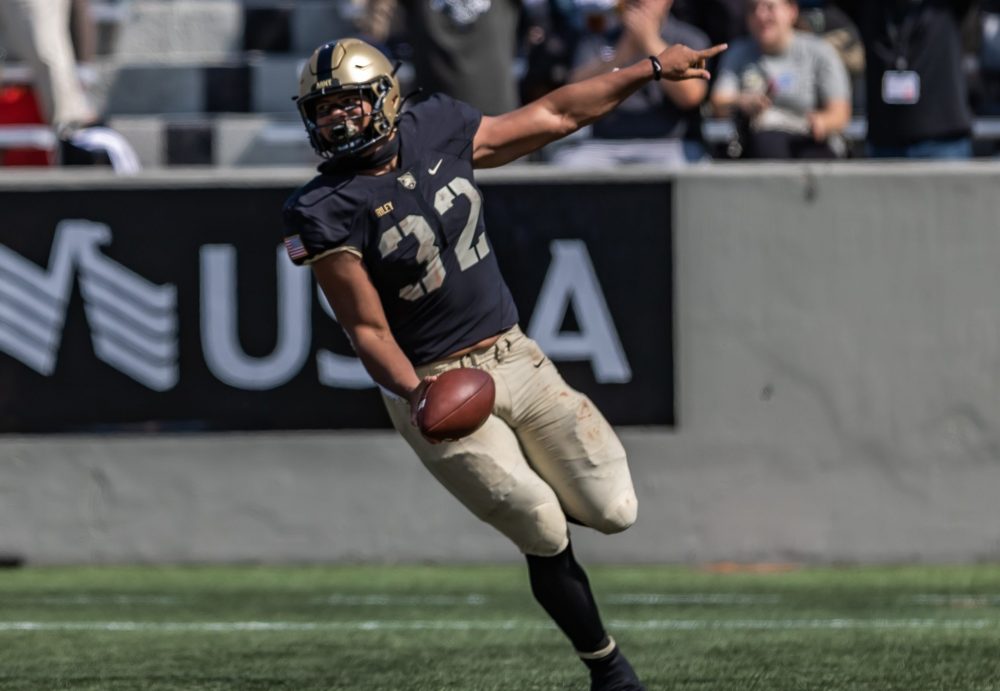 Thought Villanova would provide more of a challenge for the Black Knights but Army rediscovered its offensive identity, establishing the run early and often in a runaway 49-10 win.

On paper, Villanova was one of the best Division I-AA teams that Army has faced in Jeff Monken’s nine years. Army’s offense found its perimeter game with Tyrell Robinson and Braheam Murphy and had seven runs of 20 yards or more including three touchdowns.

Army jumped from 46th in the nation in rushing yards per game to third (285.0) with its 472-yard day. Quarterback Tyhier Tyler notched his second three-touchdown rushing game.

Good to see junior fullback Tyson Riley have a career day (156 rushing yards) and step up after Jakobi Buchanan left the game in the first quarter. Riley’s 70-yard touchdown run was something that was missing and much needed in Army’s offense. The longest run by an Army fullback was 9 yards in its first two games against Coastal Carolina and. Buchanan broke off a 55-yard run on his only carry against Villanova.

Monken said Riley isn’t as full speed yet after a preseason ankle injury and that he’s “still capable playing more faster and physical.” Should be fun to watch.

As for Buchanan’s injury, there wasn’t a specific update given in the postgame but our medical analyst and two-time Army captain Steve Anderson said on the recap podcast (link below) that he thought it could be a deep bruise over a more serious setback. This bye week will certainly help Riley and Buchanan.

Army won for the fourth time in Monken era without completing a pass. The Black Knights attempted just one pass following a successful throwing day against UTSA. Somewhat surprising but Army only had 3rd-and-5 or more four times in the first three quarters.

Monken moved into sole possession of second place on Army’s all-time wins list with his 59th career victory at West Point. Legendary coach Earl “Red” Blaik is first with 121 wins. Would probably take 7-8 more years to pass Blaik. Monken has been courted by Power Five programs in the past but his love for the players and the program has always stood out.

Tyrell Robinson’s 73-yard punt return touchdown, the first in 255 tries for the Black Knights, was electric. Robinson received a solid block from Jimmy Ciarlo to start his return, a strong block from Tommy Zitiello to give him the sideline and Bo Nicolas-Paul sealed off the rest.

Not surprising that it was Army’s most experienced defensive backs that came up with the team’s first two interceptions and takeaways of the season in critical times. Captain Marquel Broughton picked off his fifth career pass, tip-toeing the sideline. Jabari Moore ended a Villanova scoring chance with his sixth career pick in the end zone. Army had three of four more chances for interceptions as the defense flustered Villanova quarterback Connor Watkins, who threw for only 74 yards on 12 completions.