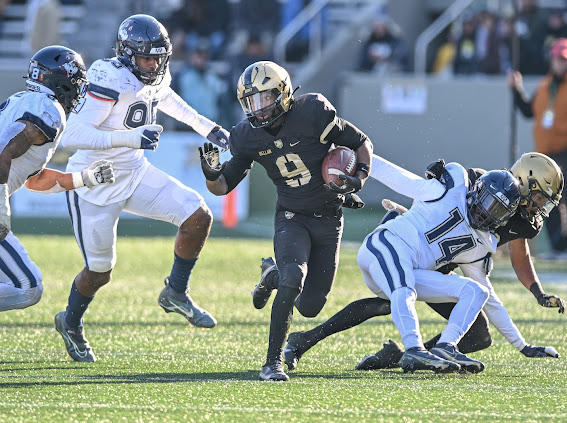 Looked like Army’s offense was heading for another tough game early against UConn. Army ran only three plays in the first quarter with the benefit of a punt block touchdown by Miles Stewart. The Black Knights were forced to punt after 12 plays on their second drive.

Army’s first 17 plays were runs totaling 58 yards. Turns out Army’s first pass attempt was one of its offensive game changers and it wasn’t a completion. UConn was called for pass interference on Isaiah Alston on 3rd-and-15. Two plays later, Braheam Murphy dashed 34 yards deep into UConn territory. Army grinded out the next 28 yards on seven plays, culminating with quarterback Jemel Jones’ touchdown run to give Army a 13-10 halftime lead that it would not relinquish.

Army’s defense played its third straight effective, inspirational game. The Black Knights limited UConn seven points and 52 rushing yards in the second half. Army has moved up from 82nd to 50th in scoring defense (24.6 points) over the last three games.

Senior captain Marquel Broughton closed out his Michie Stadium career in style with 13 tackles and his seventh career interception. The passion and energy that Broughton brings to the field is second to none. He’s one of best captains and leaders in my 15 years following Army football. Jabril Williams talked about how Broughton has kept encouraging him to block punts in practice. The freshman got one in the first quarter that turned into a touchdown.

Broughton also makes some next-level plays. He spun off a block and tackled a UConn back for a loss in the first half. Broughton adjusted from looking to make a big hit to picking off a pass on the fly in the fourth quarter for his second interception in as many games. Monken said Broughton was moved from free safety to strong safety for the game when Quindrelin Hammonds was sick last week. Hope Broughton, if he wants, gets invited to a senior all-star game. He’s earned it.

Braheam Murphy stepped up big time. With Tyrell Robinson out for the season and starter Ay’Jaun Marshall missing the game due to injury, Murphy led the slotbacks to the position’s best rushing output (174 yards) of the season. Ironically, it was the most in a game by Army slotbacks since 182 yards against UConn last year.

The Black Knights won their eighth game without completing a pass in the Monken era and the third this season (Villanova, Colgate). Pretty crazy that all three service academies was winners without a pass completion this past weekend.

UConn was called for seven false start penalties, five in the first quarter. Don’t know if Army’s shifting on the defensive line was causing that much havoc or not.