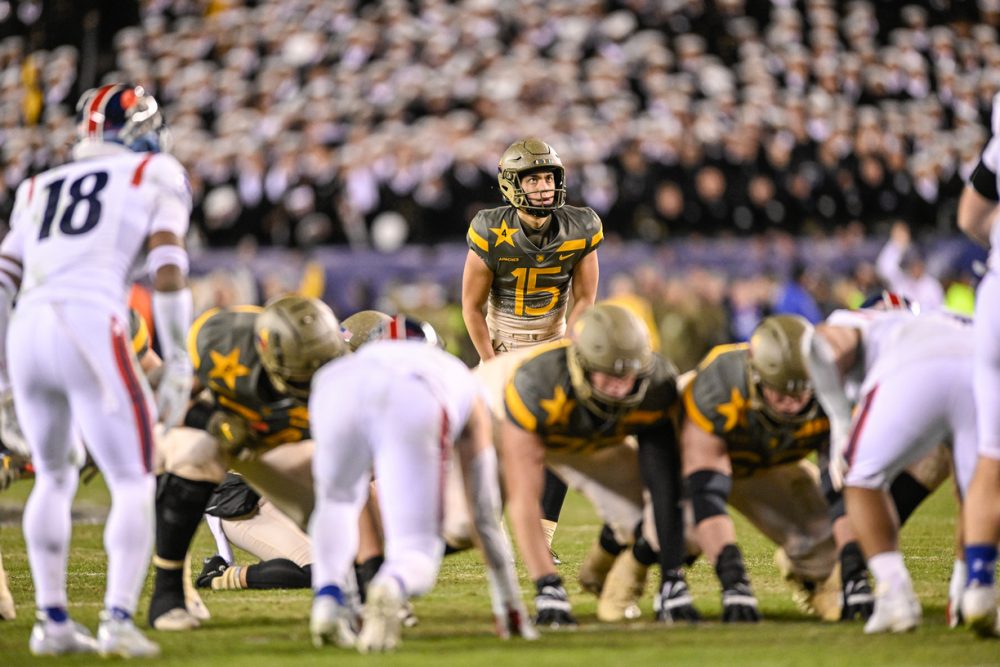 Army’s double-overtime victory may not be the best win over Navy in Jeff Monken’s era but it’s a close second in my opinion.

The game transformed from a snoozer for most of the first half to an instant classic and “Game of the Year” candidate in the end.

Maretzki carried the football from the winning kick with him throughout the postgame celebration. The football was retrieved immediately by his long snapper Ryan Aquilar and will be going back to his home in Hawaii during the holiday break.

Great to see Maretzki have his redemption story after missing a game-winning field goal and an extra point in a one-point loss at Troy in early November. Was watching Maretzki during early warmups two hours before kickoff and he was locked in. Maretzki’s first-half extra point and game-tying 37-yard field goal were hit spot on leaving no doubt.

Somehow, predicted the game’s final score spot on and even mentioned, “counting on Army’s defense creating a game-changing turnover as the difference” in the Prediction Time post. That it did.

Watching Army’s goal-line stand in double overtime from the back of the end zone was something to see. At first, couldn’t tell if Navy fullback Anton Hall broke the plain or was down before the fumble. Once linebacker Kalvyn Crummie started sprinting off the field, signaling fumble knew that Army’s defense has come up with that big play needed for victory. I’ll let Army captain Marquel Broughton talk about the efforts of Crummie, Austin Hill and Darius Richardson.

“We were desperate to win,” Army senior captain and safety Marquel Broughton said the day after the victory. “You see that in the way people were shedding blocks, you see the way Darius Richardson jumps on a pile and you fight for that ball with everything you have. Kalvyn Crummie is fallen over but he punches through the ball. Austin Hill, he’s fighting off a block, making sure he gets that tackle. That’s the desperation I was talking about.”

Monken talked about Noah Short’s speed as one of the keys to the freshman blocking the punt late in the first half that was recovered by freshman Jabril Williams for a touchdown. Short’s timing was pretty good too. Short said his effort was fueled by hearing seniors Andre Carter, Fabrice Voyne and Daryan McDonald (former player, student coach) in position meetings share their regrets about last year’s loss to Navy.

“Seeing how much they cared about and just being involved this year, it put an extra emphasis to me, personally,” Short said. “To me (knowing) that they put in their time, I was going to do whatever I can to help them out.”

The victory was a redemption story of sorts for all-American linebacker Andre Carter. Navy ran end arounds for big gain toward Carter’s side in last year’s win. This time, with NFL scouts from Steelers, Vikings, Ravens, Bears, Cardinals, Panthers, Falcons and Lions watching, Carter, who has been projected as first-round pick by some draft experts, held the edge, making tackles or forcing runs inside.

Next stop for Carter, Army’s single-season sack leader, is the Reese’s Senior Bowl in Feb. 4, 2023 in Mobile, Ala.

Anyone else surprised that Army’s offense came out in a shotgun formation with senior quarterback Cade Ballard making his first start of the season and first-string quarterback Tyhier Tyler lining up as a slotback? The formation was certainly a wrinkle but didn’t throw off Navy’s defense as the Black Knights had only 97 rushing yards on 44 attempts in regulation. Army had at least three missed opportunities in the passing game with two incompletions that were in the receiver’s hands and another pass that Cole Caterbone nearly made a diving catch on as a Navy defender tackled him.

Don’t know what was going on with the communication late in Army’s second drive of the third quarter. Tyler started the possession at quarterback and broke off a 40-yard touchdown run that was called back on a correctly-called block-in-the-back penalty. He picked up a first down on 3rd-and-4 to Navy’s 29. But, Tyler was replaced by Ballard on 3rd-and-5 from Navy’ 24. Center Connor Bishop snapped the ball two times in a row (the first one on a false start). Army lost 25 yards and a chance for field goal the second time. Why not leave Tyler in the game with an opportunity to kick close and even pick up a first down?

Give Tyler credit for doing whatever the team needed in this game, his last at West Point.

There was a lot of talk about a tripping call on Army missed on quarterback Xavier Arline near midfield late in the first half during Navy’s press conference and social media. The missed calls were on both sides as two potential pass interference calls and a Navy offensive lineman tackled linebacker Cam O’Gara on Anton Hall’s 77-yard touchdown.

Postgame observations: Before Jeff Monken headed to the locker room to celebrate victory, he helped Gavin King down from the stands to join in the celebration. King was an honorary member of Army’s 2018 team when he was 10 years old through Team Impact, a non-profit that unites children with serious conditions and college teams. Gavin’s dad, Kevin, also came down from the stands for the locker-room celebration.

Bo Nicolas-Paul leaned on a cannon a few steps from where he had just sang Army’s alma mater next to senior slotback Braheam Murphy. The emotion of Army’s win was sinking in for the junior cornerback. Nicolas-Paul worked his way back from a knee injury against UConn on Nov. 19 to play some snaps Saturday.