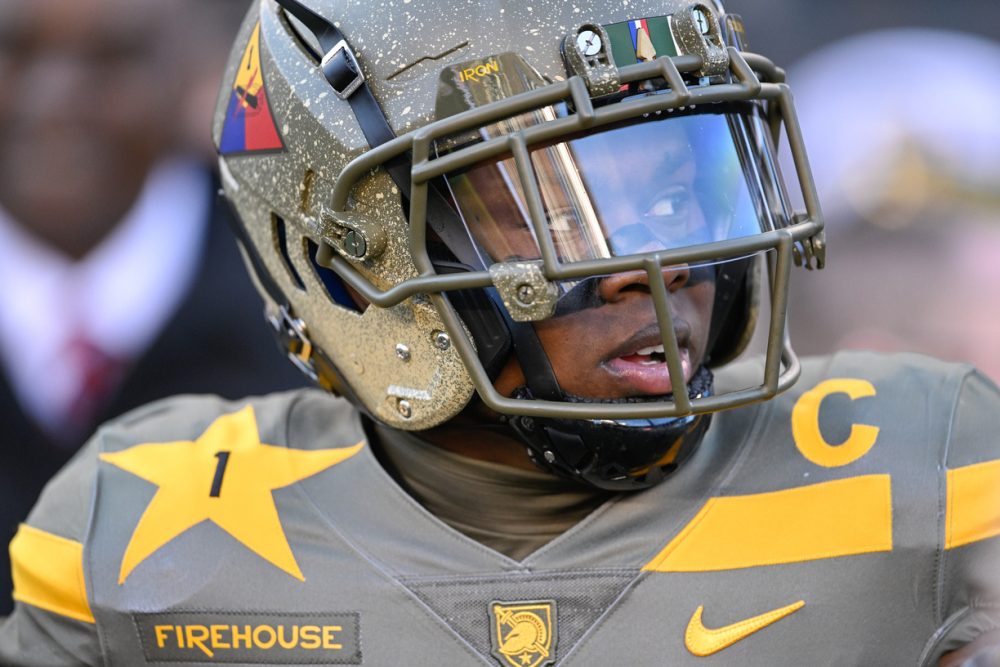 Marquel Broughton watched the replay of Army’s hard-fought, historic victory over Navy on the drive from Philadelphia back to West Point Sunday.

The game’s ending and the celebration following still felt surreal one day later.

Broughton had one of the best views for Army’s singing its alma mater second after a double-overtime win. He jumped up to the ledge of Lincoln Financial Field’s stands with fellow starting safety Quindrelin Hammonds, wanting to take in every single second of his final game in an Army football uniform.

Broughton’s vision was a sea of cadets, who had rushed the field, blended in with his teammates. Just the image that Broughton, one of four regimental commanders in West Point’s Corps of Cadets, envisioned when he was named a junior football captain for the 2021 season.

“After the alma mater, the team and the Corps just connected,” Broughton said. “I thought that was really special. That was something that we’ve been trying to do for the past two years, really just get the support, to see that support, to see everything play out the way we wanted and just to win the way we did, that was amazing just to see all of the guys happy.”

Joining Broughton on his perch after the alma mater was Army coach Jeff Monken. The players and coach spent a moment that peers at other football schools would be jealous of. Broughton had the biggest smile, spending one last moment on the field with the person that always believed in him.

Broughton again left every ounce of energy he had for the Black Knights, making 10 tackles. Three of those stops came on Navy’s final drive including a tackle for loss during Army’s goal-line stand, that resulted in a Midshipmen fumble.

“I don’t know if I’ve ever been around a young man on a football team that has been more dynamic as a leader than him…To be able to sit up there on that wall and to see his teammates and classmates celebrating together and to see the scoreboard in our favor in the biggest game of his career, in the fight of our lives, just to savor that moment is pretty special.”

Monken added, “I just jumped up there to kind of savor it with him and tell him how much I love him because I do. I love that kid. He’s a special, special young man. The soldiers that he’s serves in the Army they are fortunate to have that guy leading them. They are going to love that guy.”

It took a while Broughton to leave the field Saturday night. He made the rounds spending moments with 30 family, friends and coaches, continuing the celebration and reflection. Broughton shared an embrace with his position coach Scot Sloan. As soon as Broughton entered the locker room, Nancy Monken, the coach’s mother, was waiting.

“Coach Monken is more than a football coach. A lot of things that he teaches us on the field, you can take into your life. That’s why our bond is the way it is where I’ve kind of grown attached to him. He just teaches me so much. He’s consistent. I’ve never seen a man so consistent with what he preaches and how he acts. There’s little things that I take from him that I’m going to take the rest of my life…He’s definitely more than a coach. I love coach Monken to death. I love his family, his three girls, his wife and his parents.”

Family has always been a source of strength for Broughton. That strength has tighten during his four years at West Point. Broughton, his mother Frederica Daniels and sister Antaneshia Broughton were on CBS opening to the Army-Navy game. The piece, that featured players from both teams and their families reflecting on their life journeys, ended with Daniels saying, “It’s a family.”

Broughton doesn’t exactly know what the future holds. He prays Saturday is not the last time he puts on a helmet. The NFL has always been his dream.

“Whatever happens, I have two great opportunities,” Broughton said. “I can go play in the NFL or I can go serve the country. I’m good regardless. I pray that I do get another chance to put on a helmet and just accomplish the dreams that I had as a kid going to play in the NFL.

“If it doesn’t go through, I get to graduate from West Point, become a commissioned officer. I’m living pretty good.”

And, Broughton will continue to lead no matter where his path takes him.