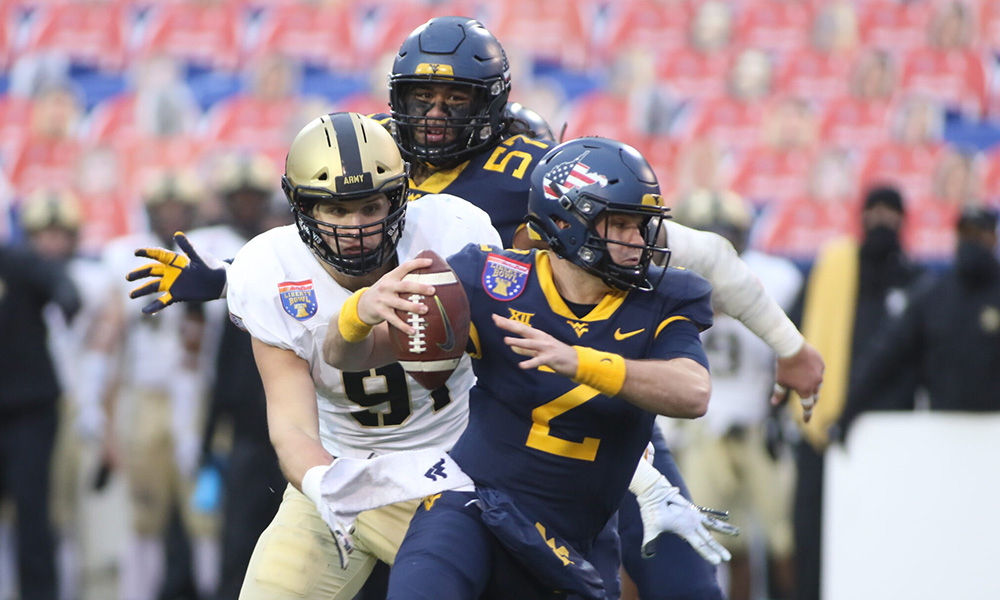 Army looked well on its way to a fourth straight bowl win under Jeff Monken after its opening second-half drive.

The Black Knights offensive line was owning the line of scrimmage against a very talented West Virginia front for eight minutes. And, Army owned a two-score, 11-point lead over West Virginia with seven minutes left in the third quarter.

West Virginia coach Neal Brown’s switch to quarterback Austin Kendall turned out to be the difference. Army’s defense had bottled up starter Jarret Doege. Both of Kendall’s touchdowns were delivered to wide-open receivers, starting with a 4th-and-goal score to tight end Mike O’Laughlin.

Army never built on its momentum for that opening second-half drive as West Virginia successfully recovered an onside kick after the O’Laughlin touchdown cut Army’s lead to 21-16. After the Black Knights’ defense forced a 3-and-out on onside kick, the offense generated just 21 yards on 12 plays in its next two possessions.

Still not sure why quarterback Christian Anderson was taken out of the game one play after a 32-yard completion to Chris Cameron with Army driving for the tying field goal or go-ahead touchdown late in the fourth quarter. Didn’t have a chance to ask Monken about the decision or if the game plan was to play both starter Tyhier Tyler and Anderson. The move of bringing in Tyler on 2nd-and-6 from West Virginia’s 25 with the offense in a good flow under Anderson was still a talking point 24 hours later. Bringing in Tyler, who didn’t attempt a pass, allowed West Virginia to load up the box and stop Tyler on back-to-back plays, forcing tough decision to go for 4th-and-3 or kick a 39-yard field goal. Army elected the later and missed the kick.

Several starters and key players missed the game I’m assuming due to COVID and contract tracing. The biggest absence may have been freshman playmaker Tyrell Robinson. West Virginia’s defense was inviting Army to go outside and Robinson could have made a difference. The Black Knights had one run of 10 or more yards on 59 carries. Anderson’s 13-yard run came on Army’s 57th carry of the game on the Black Knights’ final drive.

The leadership of Army’s three captains have been mentioned often during this pandemic season. Senior guard and captain Mike Johnson is going to make a great Army officer. The moments after Tyler’s third touchdown could have gotten ugly as pushing and shoving ensued. West Virginia defensive lineman Jeffery Pooler pushed Army tackle Mason Kolinchak. Johnson pulled Sandon McCoy and Chris Cameron away from a potential confrontation with West Virginia players and pointed to the sideline for his teammates to leave the field.

A pass interference penalty on Jabari Moore was a tough call that extended West Virginia’s go-ahead drive. The pass from Kendall sailed into the sideline and didn’t appear to be catchable.

Remember maybe one offensive holding penalty called on West Virginia. Officials were “letting them play” upfront as it looked like defensive end Ryan Duran was being held on every other pass rush.