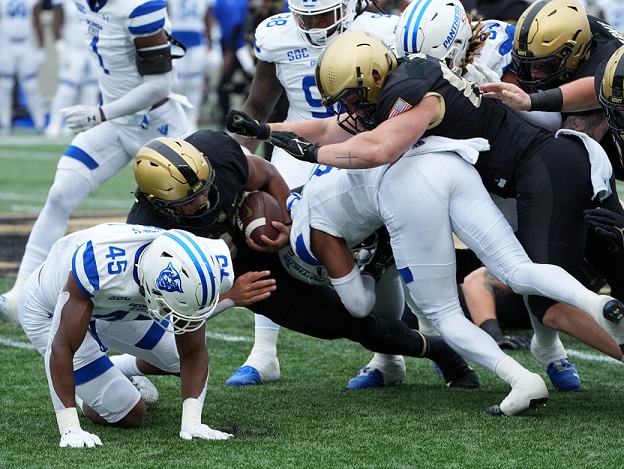 Can’t say that a 1-3 record is what I envisioned for Army through the first third of its season.

Here, the Black Knights are after a 31-14 loss to Georgia State in a game that coach Jeff Monken said included a “wasted” first half.

Thought Army playing on its home field for three straight games would lead to success as it has during Monken’s tenure.

But, there’s been no Michie fourth-quarter magic in losses to Texas-San Antonio and Georgia State. In both games, a vocal visitor’s section of fans could be heard late in the game.

The Black Knights finished 1-2 (only win over Villanova) during their “home stand.”

And now, they have No. 15 Wake Forest next on the road Saturday. Remember last year’s game? The Demon Deacons went for 70 points.

Not a good sign for an Army defense that is still searching for an identity. Knew it was going to hard to replace standout nose tackle Nolan Cockrill, linebacker Arik Smith and safety Cedrick Cunningham. Army hasn’t received consistent play from those positions this season, shuffling in players at nose tackle and linebacker.

The 31 points that Georgia State scored included two touchdowns in the final three minutes and the game’s first 17 points in the first half.

In past Army success, the offense’s time-consuming scoring drives have kept the Black Knights’ defense fresh. Turnovers on plays – the quarterback-fullback mesh and the option pitch – that Army practices countless times were the downfall in the first half.

Was asked on Crawdad’s Countdown to Kickoff during the bye week about what was most concerning about Georgia State.

My answer was Shawn Elliott, their coach. Elliott had Georgia State, winless in its first four games, ready to play from the jump Saturday at Michie Stadium. Was told Georgia State stayed over in Stamford, Conn. the night before. A longer bus ride to West Point than most for visiting teams. But, that did not affect the Panthers.

Army was flat coming off a bye and the defense struggled to get off the field on Georgia State’s opening drive. The Black Knights held Georgia State to a field goal but the tempo was set as the Panthers ran 27 plays to Army’s 10 in the first quarter.

Army was shut out at home (17-0) in the first half for the first time since Oct. 10, 2015 against Duke. Two turnovers didn’t help the cause. Both turnovers were on plays – – a mesh with Tyhier Tyler and fullback Tyson Riley and a high pitch from Cade Ballard to Tyrell Robinson – that were likely practiced multiple times during Army’s two weeks of preparation.

Would have loved to hear Jeff Monken and the coaching staff’s halftime speeches. They worked. Army’s offense took over the third quarter, rushing for 150 yards. Tyler scored two straight touchdowns on back-to-back drives.

One of the game’s more pivotal plays came on Army’s next possession. Tyler was leading the Black Knights into scoring position after Marquel Broughton forced a fumble that Leo Lowin recovered when he twisted his ankle. Ballard replaced Tyler as Army moved to the Georgia State 6 with a chance to take its first lead but couldn’t punch the ball in on four plays from there. Ballard ran left on 3rd-and-goal from the 1-yard for a minimal gain and fullback Jakobi Buchanan was stuffed on 4th-and-inches. (Hindsight) Maybe, a quarterback sneak with Buchanan pushing Ballard may have been a better third-down call. Not having Tyler as an option to sell the dive and run off tackle like he did for his second touchdown was also a factor.

Army’s defense gave up three more long touchdowns (33, 57 and 56 yards). Georgia State quarterback Darren Grainger made a perfect throw to Ja’Cyais Credle, who was one-on-one with Cam Jones, for the game-clinching 57-yard touchdown pass. Georgia State caught Army being aggressive on a 56-yard run by Tucker Gregg to complete the scoring.

The Black Knights allowed 299 rushing yards and are now ranked 127 out of 131 FBS teams against the run (222 yards per game. Army is getting gashed up the middle too much and not consistently playing assignment sound on the edge.

Lowin continues to play at a high level. He made a career-high 12 tackles despite facing plenty of second-level blocks by offensive linemen. The junior linebacker is on pace to become Army’s first player to record 100 tackles in a season since Cole Christiansen (112) in 2019.

Army’s fake-punt on 4th-and-11 down three in the fourth quarter was baffling but it was apparently something that’s called off reading the opponent’s personnel. When Georgia State left its defense on the field, it was decided to attempt a fake. Austin Hill, who had left the field twice to what is believed as cramping or dehydration, took the snap and gave every effort he had on the run but he was stopped 5 yards from the sticks.

Monken said during the postgame press conference that if they were going to go for it and not punt, keeping the offense on the field would have probably been a better decision.

Remember when Army was leading the nation in passing efficiency. Army quarterbacks were 1-for-8 for 11 yards and an interception.

Slotbacks were a big part of Army’s passing success in the first two games. Not so much in the last two.

Slotback Ay’Jaun Marshall had only one carry for 15 yards. Marshall seems to make something happen almost every time he gets the ball on the ground or in the air.

Give Buchanan credit for playing injured (knee). With Tyson Riley out with an injury in the second half, the Black Knights went to Buchanan probably more than anticipated. He finished with 56 yards on 12 carries (4.7 yards).

These takes and more on our Black Knight Nation recap podcast with Steve Anderson, Steve Kreipe, Seth Mendelson and Brendan in Jersey below