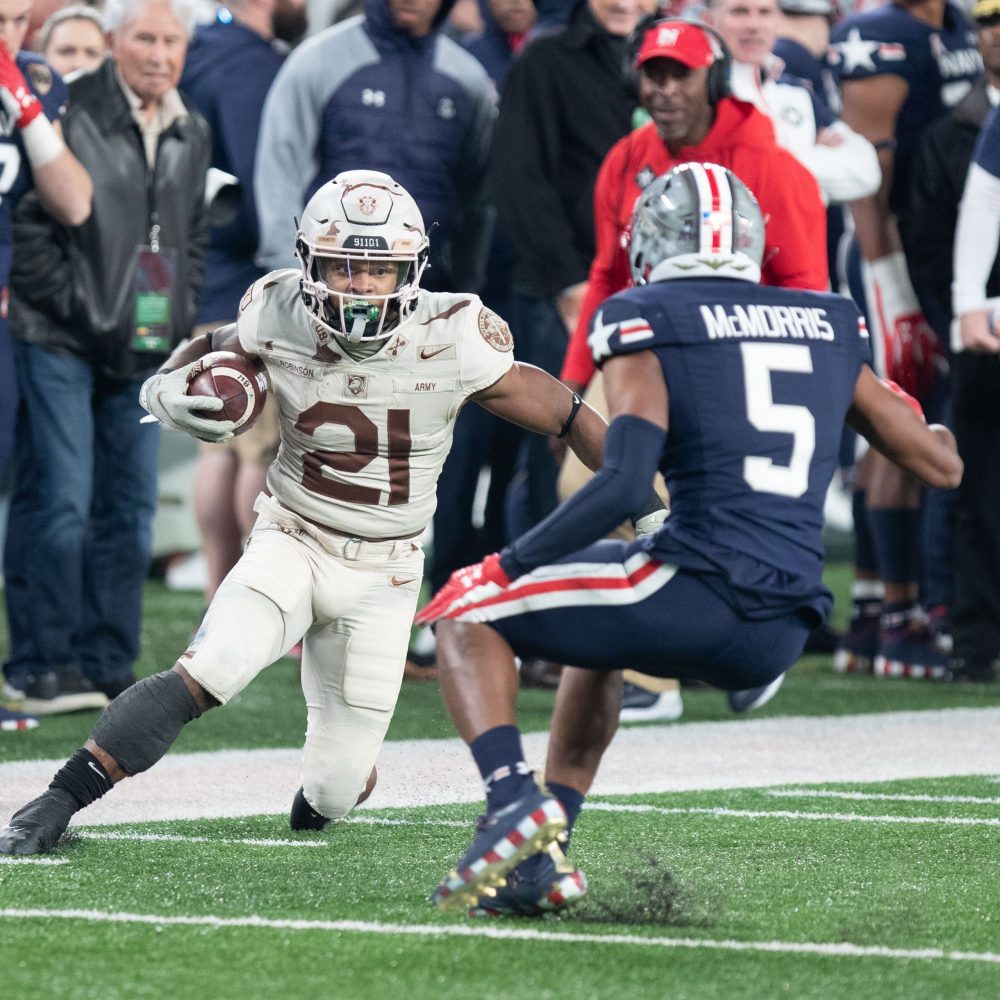 Thought there was potential for a big offensive day from Army when Christian Anderson scored on a 56-yard touchdown run on the Black Knights’ fourth play against Navy.

Army would never reach the end zone again and its offense would total 157 yards the rest of the game in a 17-13 loss to Navy.

The Black Knights had two chances to build a bigger lead in the first half but settled for two short field goals inside the red zone when personnel choices and execution were shaky.

After Anderson completed a third-down pass to Cade Barnard to Navy’s 16, Anthony Adkins would follow with a 3-yard run (the Diego Fagot holding onto Adkins’ ankle after the whistle play) and quarterback Tyhier Tyler was stuffed for no gain. Army kept Tyler on the field for 3rd-and-7 instead of bringing Anderson in to at the very least have the threat of passing the ball.

The Black Knights couldn’t get the play off in time and were called for a delay of game penalty without using a timeout to save some field position. Anderson remained on the sideline for a 3rd-and-12, a passing down. Tyrell Robinson ran a just sweep for four yards and Cole Talley kicked a short field goal.

Asked Jeff Monken in the postgame press conference if he was playing for a field goal with the third-down play call and he said that Army was trying to make it a more manageable fourth down.

Hard to believe that sophomore wide receiver Isaiah Alston had just one reception for 35 yards (most of that was YAC) when Army was faced with plenty of passing downs and Navy was loading up the line almost daring the Black Knights to pass. Simply, Army didn’t use a mismatch to its advantage with Alston.

The Black Knights advanced the ball two yards or less on 13 of its 18 first downs. Hard to stay “on schedule” with that production. Don’t recall Army pitching the ball once. Tyrell Robinson was the only slotback to get a touch (7 carries, 21 yards, 2 catches, 30 yards). Army fullbacks carried the ball eight times for 28 yards. Jakobi Buchanan had just four carries, netting 24 yards. Seemed like Robinson ran inside as many times as Buchanan.

Both of Navy’s touchdowns were set up on reverse plays. Jayden Umbarger made Andre Carter miss in the backfield on a 27-yard run on 3rd-and-5 on the Midshipmen’s first scoring drive. Chance Warren outran linebacker Kemonte Yow to the edge and eluded two or three more Army defensive players on a 26-yard sideline run on 4th-and-4 ahead of Navy’s fourth-quarter touchdown.

Army attempted its own trick play with a slotback throwback pass during a critical 3rd-and-8 from the Black Knights 49 with less than four minutes left in the game. Robinson threw a good spiral but Navy had quarterback Christian Anderson well covered and the pass fell incomplete. Alston was lined up on the opposite side.

Navy quarterback Tai Lavatai would not be denied on his 8-yard touchdown run in the first quarter. Safeties Marquel Broughton and Cedrick Cunningham tackled Lavatai high and the quarterback powered through into the end zone. A sign that Navy was there to play and wasn’t backing down, as expected.

One of few Army bright spots was another next-level punt by Zach Harding. With NFL scouts on hand, Harding’s 50-yard punt rolled out of bounds at Navy’s 1-yard line. The National Football League Players Association Collegiate Bowl announced Monday that Harding has accepted an invite to its all-star game on Jan. 29, 2022 at the Rose Bowl in Pasadena, Calif.