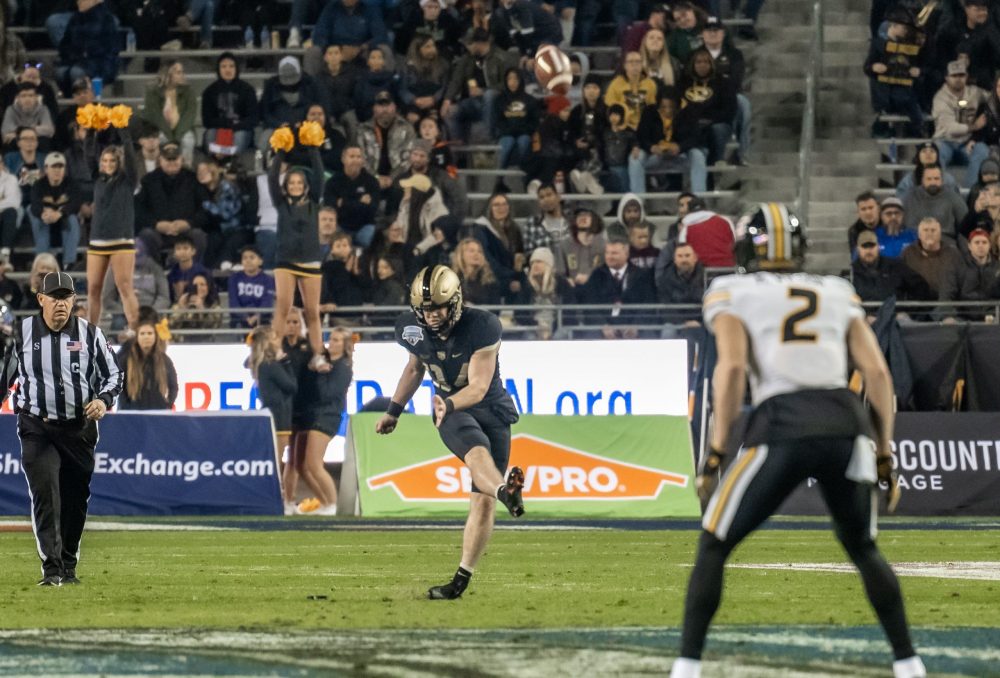 When was the last time Army won a game in regulation on a walk-off field goal?

Research discovered that it was the first walk-off regulation kick since Kurt Heiss’ 24-yard field goal in 25-24 win over The Citadel on Oct. 22, 1994.

It wasn’t Talley’s first chance at walk-off win. Talley missed a 50-yard field goal as time expired at The Big House against Michigan his freshman year. It was Talley’s first college attempt before more than 110,000 fans.

“Kicking is a huge mental game,” Talley said. “There was a year there where I would think about that (the Michigan kick) all of the time because these guys mean so much to me and I want to do as well as possible for them to succeed.

“I think this past year and half, I think my mental game has improved a lot and that is all thanks for coach Sean Saturnio. Coach Saturnio during special teams practices and meetings really emphasized the importance of the mental game. He puts so much research into it. We do breathing exercises like Bruce Lee did.”

Three quarterbacks fielded questions together from the media. Christian Anderson, Tyhier Tyler and Jabari Laws were on the same page as they’ve been all season, supporting and complimenting each other.

The Black Knights made the rotation under center work again in their fourth straight Armed Forces Bowl win – a 24-22 final-play victory over Missouri.

To hear Anderson say that he might have been able to go back into the game after tweaking his ankle but was confident in Tyler and Laws getting the job done and happy for their success is all you need to know about the three quarterbacks and the team’s culture.

Had a few Army fans hoping Laws would get a chance to play in his last college football game. Fate and score (Army trailing by one point with 71 seconds left) would accommodate their wishes as Laws, who worked his way back from two anterior cruciate ligaments tears, positively led Army to field-goal range in his first game in more than a month. Cole Talley would make the field goal to complete Laws’ incredible comeback story.

What a difference in the option distribution as opposed to the Navy loss. Fullbacks carried the ball eight times on the opening drive or as many touches as they had in the Army-Navy game. Overall, B-backs had 39 of Army’s 55 carries for 134 yards. The Black Knights’ fullbacks combined for 28 yards against Navy.

Jakobi Buchanan’s 10-yard touchdown was a run of option beauty as he discarded a Mizzou tackler at the 2-yard line and powered past attempted tacklers into the end zone.

Army was 5-for-5 on fourth down with Buchanan moving the chains four times. Buchanan finished the season with 17 fourth-down conversion. The junior fullback has still yet to be dropped for a loss of yardage in his 266 career carries.

Andre Carter’s right-place, right-time football IQ was on display again. The linebacker’s sack forced Mizzou to kick a field goal in the first half. He was credited with a tackle for loss on Army’s fourth-down stop of Mizzou in the third quarter and also recovered a fumble. Right place, right time football IQ. Carter ended his junior year with an academy-record 15.5 sacks and 18.5 tackles for loss, fourth in Army history.

Zach Harding again booted another next level punt downed by Ay’Jaun Marshall at Mizzou’s 1. Marshall also made a tackle for minus 2 yards in punt coverage.