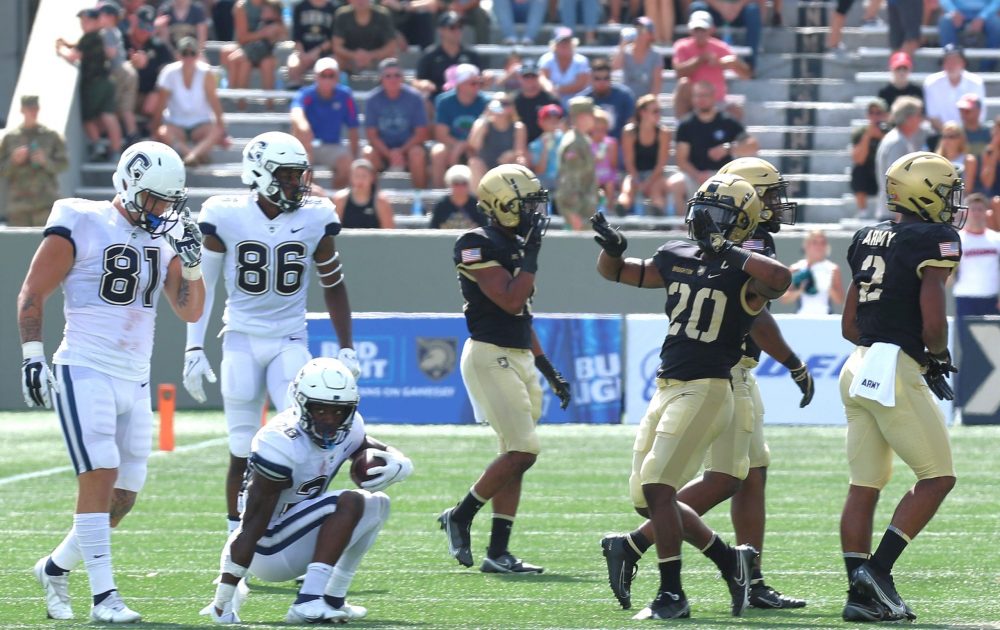 Army has held as a 10-point home favorite over UConn throughout the week.

Somewhat surprising considering the direction of the teams heading into Army’s Senior Day. The Black Knights have lost two straight games by a combined seven points with an offense scoring 16 total points.

UConn is riding a three-game home winning streak with victories over Boston College, UMass and a good Liberty team last week. The Huskies have allowed 14 points or less in five of their six wins this season.

The line may be reflected of UConn’s road record of 3-25 over the program’s last five seasons.

Sal Interdonato (Black Knight Nation): UConn 17, Army 14. Definitely going back and forth on this pick. Army’s offense has to be better than it has been the last two games (two total touchdowns). If it is, the Black Knights will pull this one out.
Seth Mendelson (Black Knight Nation): UConn 35, Army 20. The Huskies are already bowl-eligible but still have more to prove. Speed wins the day and that makes it a long one for Army
Brendan in Jersey: Army 24, UConn 20. Vegas has Army around a 10-point favorite as do most major computer models. I think that’s crazy. UConn is a wildcard here because they already have their bowl eligibility so there’s no pressure on them, which could make them dangerous. But, they also may have a comedown after knocking off a Top 25 team last week. Either way, this game hinges on Army’s offense.
Steve Kriepe (Crawdad’s Countdown to Kickoff): Army 26, UConn 18. Since the loss to Wake Forest, Army’s once porous defense has steadily improved. That trend will continue against UConn’s 125th-ranked offense. On the other side of the ball, Army’s offense will get back to where it was against Colgate and Louisiana-Monroe with a complete game.”

Predictions from across the college football universe.

Scott Van Pelt (ESPN): Army -10. Van Pelt says on ESPN.com, “Let me ask you – if a 3-6 team is giving more points than it scored in either of the last two weeks to a team who just qualified to play in a bowl, you kind of have to take them, don’t you? The 3-6 team, I mean. Yes. By rule. Army giving double digits for some unknown reason to UConn.”
Morgan Moriarty (Bleacher Report): UConn 20, Army 17