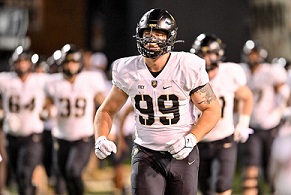 Army football is at a crossroads as the Black Knights hit the season’s halfway point.

Coach Jeff Monken affirmed that on his weekly radio show earlier this week.

Didn’t think Army would be at a critical point in its season ahead of today’s game against FCS Colgate. But, here, the Black Knights, sitting at 1-4.

“There’s a quote that we always, ‘some men keep coming,'” Chris Frey told Army athletics this week. “It’s something that I hold close to my heart and every other guy on this team holds close to his heart. We’ll never give up. When you are backed up and in the corner, taking blows, you can either fall down for the 10 count, like coach Monken says, or you can get up and fight and keep swinging.”

Sal Interdonato (Black Knight Nation): Army 49, Colgate 14.
Seth Mendelson (Black Knight Nation): Army 42, Colgate 14. The Raiders game could not come at a better time for Army. Colgate cannot handle the larger Army squad and coach Monken uses a wide array of players in a West Point victory.
Brendan In Jersey: Army 60, Colgate 17. With respect to Colgate, this is not the same team that walked into Michie in 2018 and posed a legitimate challenge. This game ought to be little more than a live-fire scrimmage for Army (literally and figuratively). Hoping to see the full reserves emptied from a roster standpoint.
Steve Kreipe (Crawdad’s Countdown to Kickoff): Army 35, Colgate 9. Army comes out with an attitude, determined to make the naysayers eat their words!