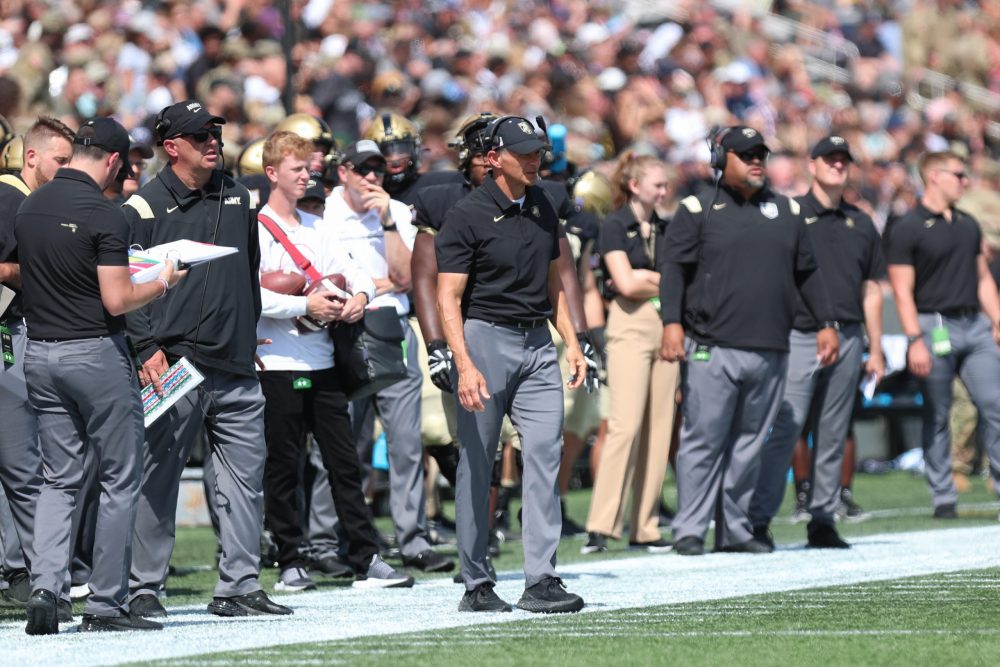 You know it’s Army-Navy Week when the Black Knights’ first-team offense and defense increase their practice snaps against each other.

The ramped-up looks started last week in preparation for America’s Game. The practice time to run and defend the option with Army’s best players has been called “The CIC” periods.

Outright possession of the Commander in Chief’s trophy and a potential trip to White House are on the line for the Black Knights in the 122nd meeting against Navy Saturday at MetLife Stadium.

“Obviously with the uniqueness of the offense, it really helps our defense with the speed of the game and it’s certainly different than our scout team,” Army coach Jeff Monken said during his Monday press conference. “Not that our scout team does a poor job. They’ve been trained in this offense. It’s different when you have the players at the top of the depth chart going against each other.”

Getting the offense as many possible looks that Navy defensive mastermind Brian Newberry might dial up is essential.

“They are extremely well-coached and they play their butts off,” Monken said of Navy’s defense. “They’ll be as stingy as anybody as we have faced this year in playing against our offense…I think Brian Newberry’s is an outstanding coach. He has a great football mind.”

The Black Knights must be ready for Navy’s offense, which has set its season high in scoring the last two games with 35 and 38 points respectively.

“There’s a lot that concerns me when facing their offense,” Monken said. “No. 1, they are very well-coached and very efficient. They control the clock. They are disciplined football team. They are a number of players that I can mention by name that have made plays against us in past games that I’ve seen make plays throughout this season.

“I think they are playing their best football right now. They’ve played as well on offense these past few games as they’ve played all year. They’ve battled teams like Cincinnati and SMU, ranked teams, to close games.”

Monken reminded his players that the service-academy rivalry will be the toughest game this season with a schedule that included an overtime win over Air Force in the first leg of the CIC trophy. Mental preparation is just as important in one of college football’s most physical games of the season.

The effort, practice and work is all-consuming to win this game. The “Beat Navy” clock in Army’s locker room is getting closer to Saturday’s 3 p.m. kickoff. It’s almost go time.