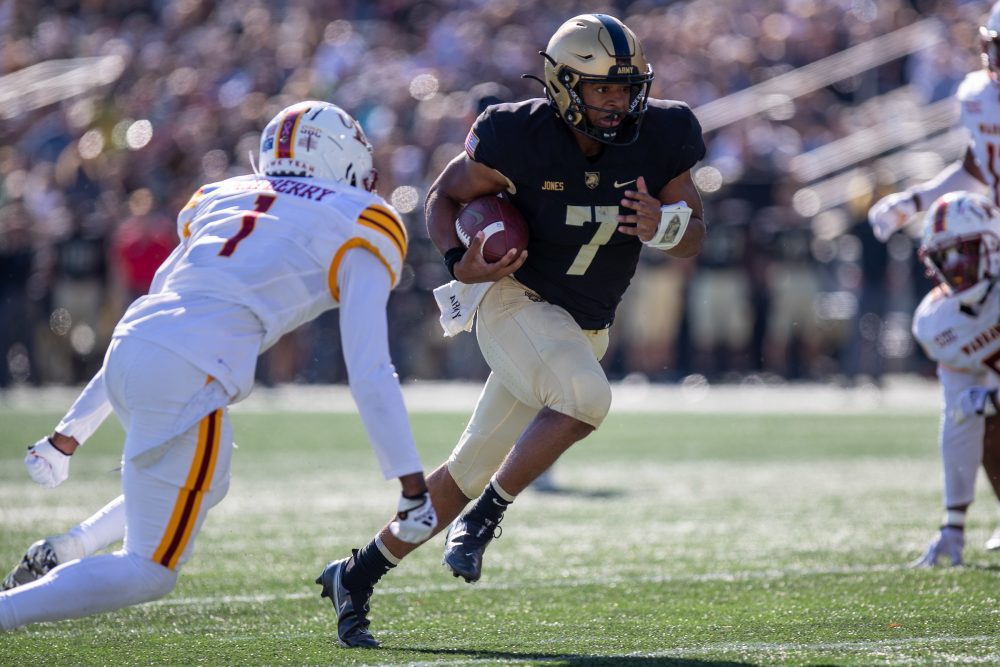 The result: An impressive 48-24 victory over the University of Louisiana-Monroe (ULM) before 30,132 fans that is not only breathing new life into the possibility of a bowl game for the Black Knights but should give them all the momentum they need as the team focuses on its next game versus service academy-rival Air Force Academy on Nov. 5 in Texas.

It also created a potential battle for the starting quarterback spot against the Falcons in two weeks, thanks to an impressive performance by senior Jemal Jones, who was starting his second straight game due to nagging injuries to both Tyhier Tyler and Cade Ballard, both of whom saw limited action on Saturday.

Army is now 3-4 going into its matchup with Air Force and everyone associated with the program from head coach Jeff Monken to the players and staff members realize that the Black Knights need to finish at least 6-6 this season to qualify for a post-season bowl game.

Frankly, the game did not start out well for Army. Leading 7-3 early in the second quarter, Monken, as he often does (“That is what we do”), gambled on a fourth down and about two feet from Army’s own 13-yard line. The running play actually lost a yard and the Warhawks were in business from the Army 12. They scored on a pass on the very next play to go up 10-7. About seven minutes later, ULM added another touchdown to take a 17-7 lead.

But that was it for the Warhawks, who are now 2-6 and have lost four games in a row. Jones scored from 2-yard line to bring Army to within 17-14 2with 38 seconds left in the half.

Army came out of the locker room at halftime a completely different team. Because ULM has not faced an option offense this year, Monken said that there was no film on how they might set up defensively for Army’s offensive scheme.

“We have no idea how they were going to line up against us,” he said. “We try to guess (how they might set up) and we say that this is their base defense. We literally go into the game with enough reps against different things that we can settle into what we can do.

“Halftime was really important to us. Coach (Brent) Davis and Coach (Cody) Worley devised a plan for second half and our guys executed pretty well.”

What the coaches came up with obviously worked. In fact, a potent and balanced rushing attack and two timely pass completions helped the Black Knights score on seven straight possessions from late in the first half (with the exception of a kneel down at halftime) to the end of the game. Echoing Monken’s comments, Jones said that halftime changes made all the difference.

Army finished the game with 441 rushing yards on 62 carries. Jones, who notched three touchdown runs, had 96 yards, while fullback Tyson Riley finished with 90 yards and one touchdown on just 12 carries and Braheam Murphy registered 57 yards on just five carries. Jakobi Buchanan had 45 yards and one touchdown on 13 carries and fourth-string quarterback Bryson Daily scampered for an impressive 64-yard run to paydirt late in the game for Army’s final score.

The defense was also sound, pressuring the Warhawks heralded quarterback Chandler Rogers throughout the second half and sacking him three times in the game. Rogers was held to just 164 passing yards and was intercepted once by Leo Lowin midway through the third quarter after being hit by Jimmy Ciarlo.

“We started to play Army football in the second half,” said Lowin of the defense. “We know what we are capable of and we saw a flash of it in the second half today. If we do that over a full game, we can have a great season.”

Monken added: “I thought our defense played a great second half. Our guys played really hard. Today, we put it together better. Did a better job of all three phases together. We still missed some tackles and penalties. We are going to have to play better, but I think there are some things we are doing better and that is really encouraging.”

Now with a week off before the Air Force game, Army will focus on getting its players healthy and developing a strategy to slow down the Falcons, who entered Saturday with a solid 5-2 record.

“It definitely gave us confidence going into this bye week and we can get our guys healthy,” said Jones. “Coach Monken talked after the Wake Forest game (a 45-10 Army loss on Oct. 8) that we had to start a new season. Last week was round one (a 42-17 Army win over Colgate), this week was round two and next week is round three.”