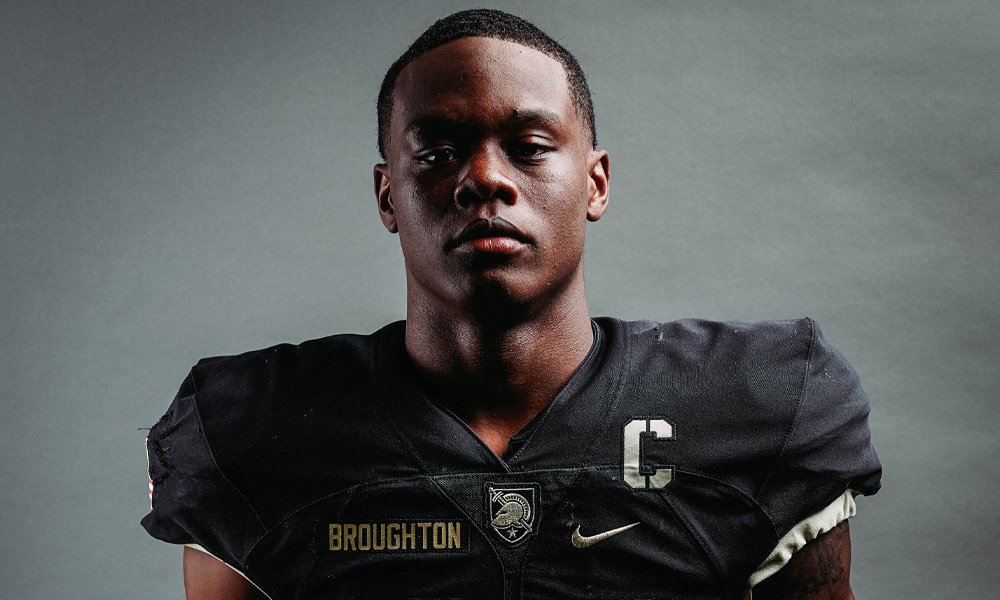 Marquel Broughton released a highlight video of his top 2020 plays this spring.

One of the opening highlights showed Army nose tackle Nolan Cockrill ripping out the football from a Louisiana-Monroe player and Broughton in the perfect position to catch the fumble out of mid-air.

Broughton was everywhere his sophomore season for the Black Knights. If there was a ball in the air or a running back broke into the second-level of Army’s defense, it was likely that the safety was in the neighborhood.

How did Broughton develop his sense for the football?

Broughton played one video game growing up – Madden NFL. He credits his early knowledge of the game to Madden.

“Football is about concepts and you see that a lot in Madden,” Broughton said. “You see what people have tendencies of doing. I kind of clicked onto that and brought it to real football. Since middle school, I’ve been able to see things and read things a lot better. It’s weird that it happened that way but it’s pretty awesome.”

Broughton will put his football knowledge to the test Saturday in Army’s season opener at Georgia State. It will be a Homecoming for Broughton, who grew up minutes from Georgia State’s Central Parc Credit Union Stadium. More than 40 family members and friends are expected to be in attendance to support Broughton. On the other sideline Saturday will be one of Broughton’s best friends – Georgia State starting linebacker Blake Carroll.

As soon as tickets for the game went on sale this spring, Frederica Daniels, Broughton’s mother, purchased a block of seats. Daniels, Broughton’s older sister and younger brother had attended every game of the Army’s captain football career until the COVID-19 pandemic last season. They were still able to travel to road games but fan attendance wasn’t allowed for home games at Michie Stadium.

Football is a strong bond in Broughton’s family. It was the sport that Broughton’s father, Antonio, signed him up for when he was six years old. Two weeks later, his father was lost. Many family challenges followed.

“He wears his family on his shoulder,” Daniels said on the Black Knight Nation podcast in May. “His father was killed by the police. That in itself was hard but I have had strokes, heart attacks and bone cancer. We struggled. We weren’t the richest people and he didn’t have all of the clothes and shoes he wanted to have but he had football and football was his outlet.

“The last thing his dad did was put him in football two weeks before he died. So football is not just football. He carries his father with football. But then, you hear him always say, ‘I came from the bottom but I’m going to the top.'”

When Broughton runs onto the field with his teammates Saturday, he’ll be wearing a “C” on the front of his No. 20 jersey. Junior captains are rare at Army. Linebackers Steve Anderson (2009-10), Jeremy Timpf (2015-16) and Cole Christiansen (2018-19) are the others to lead the football team in their cow year. Broughton was originally committed to Lafayette of the Patriot League until a visit to West Point changed his life.

“It’s a dream come true,” Broughton said of playing the ‘home game’ in front of family and friends. “You grow up trying to make it to places like this (West Point) and do things like this. To be out there and see my whole family, it’s going to be amazing. Also, I’m just running out there with my brothers and that’s always an amazing feeling. This is going to be our first game of the 2021 season and it’s going to feel amazing.”

“Georgia is a big recruiting area as you know,” Army coach Jeff Monken said. “You look at our roster and you see all of the Georgia guys. It’s nice to be able to play in the Southeast where their parents can see them and prospects maybe can look forward to the opportunity to play in areas where they are close to home.”

“The same picture that is up at West Point is in my great grandmother’s living room,” Daniels said. “I’ve seen that picture growing up all of my life. Just found out last year, that’s our cousin.  I told him (Broughton), ‘You were destined and God put you at West Point for a reason.”

Destined for greatness on and off the field.