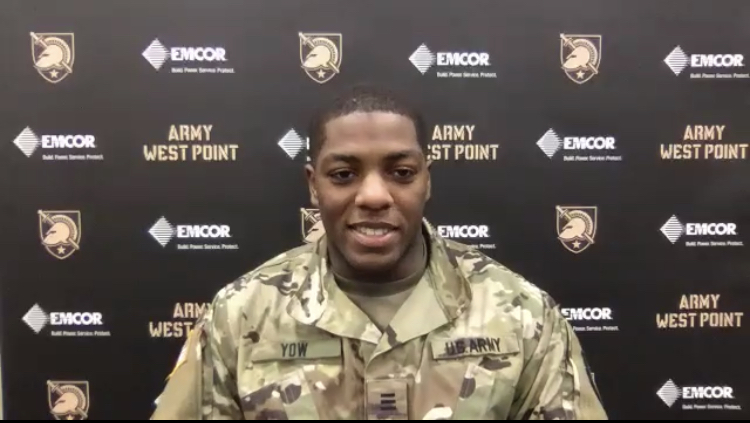 Yow earned the opportunity with the first defensive unit against one of Army’s top rivals Air Force in his hometown of the Dallas-Fort Worth area Saturday.

The senior linebacker said he experienced some nerves before kickoff. But once the whistle sounded, Yow played like he belonged. Yow, who had one defensive snap this season entering the game, notched seven tackles on 52 plays in a 21-14 overtime victory as Army retained the Commander in Chief’s trophy.

“Just to get that win in my first start, in my hometown and to secure the trophy for this program, it was amazing especially being out there with my brothers,” Yow said. “I love playing alongside Arik Smith. He’s a great individual and a great leader. I look up to him. It was a great experience. Words wouldn’t describe or do it justice, the moment and the emotion.”

Yow, who has been a special teams contributor the past two seasons, said the linebackers room helped him prepare for the start once he found out earlier last week.

“Spencer Jones, Leo Lowin and Hamilton Baker rallied around me and said, ‘Everything is going to be OK, just calm down and play your game. Triple option is what you are pretty good at,'” Yow said. “It was satisfying just to be out there for my teammates honestly. It meant a lot from them hold me accountable and put me in that position and trust that I was going to be able to do my job. It was definitely a triumphing moment.”

Both Jones and Lowin had started alongside Smith this season. Army’s coaching staff made the move to Yow for the Air Force game due to his experience practicing option offense throughout his career.

“Kemonte earned that start,” Army coach Jeff Monken said. “We didn’t give it to him. He earned it. He deserved the opportunity. He’s got a lot of experience defending this offense as a scout-team player and a veteran now, facing it four years in a row, five if you include the prep school. He just does a really good job against that offense.

“He was the right guy to have in there and I thought he did a really nice job. I was happy for him and proud of him. He was playing at home. What a thrill for him to get his first start in his home state of Texas.”

Third-down defense: Army held Air Force to 6-of-16 on third down

Air Force starting field position: Air Force 26. Includes overtime start at Army 25. Air Force began all 10 of its regulation drives in its own territory. The Falcons’ 34-yard line was their best starting position.

Here’s a breakdown of the 73 snaps (as charted off DVR):