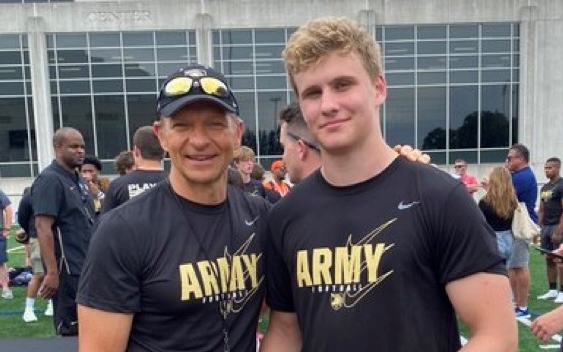 “It really was an amazing experience,” said Cole, who is 6-foot-3 and 220 pounds. “It (Army) has always been my dream school and being able to attend this camp and get to work in front of the coaches was definitely a full-circle moment.”

Cole posed with Army head coach Jeff Monken with his MVP football after the camp.

“It was amazing being able to come up to such as a beautiful campus and have the opportunity to compete with some talented kid and be coached by such an amazing staff,” Cole said.

The talent includes players from across the country including Frances Parker (Calif.) wide receiver Chris Williams. Williams received the overall MVP and WR MVP for the rising senior class. The San Diego recruit held an offer from Army prior to camp.

Here’s a list of the 2022 Army All-Academic Camp MVPs (If you received an MVP, DM @salinterdonato on Twitter to let us know)