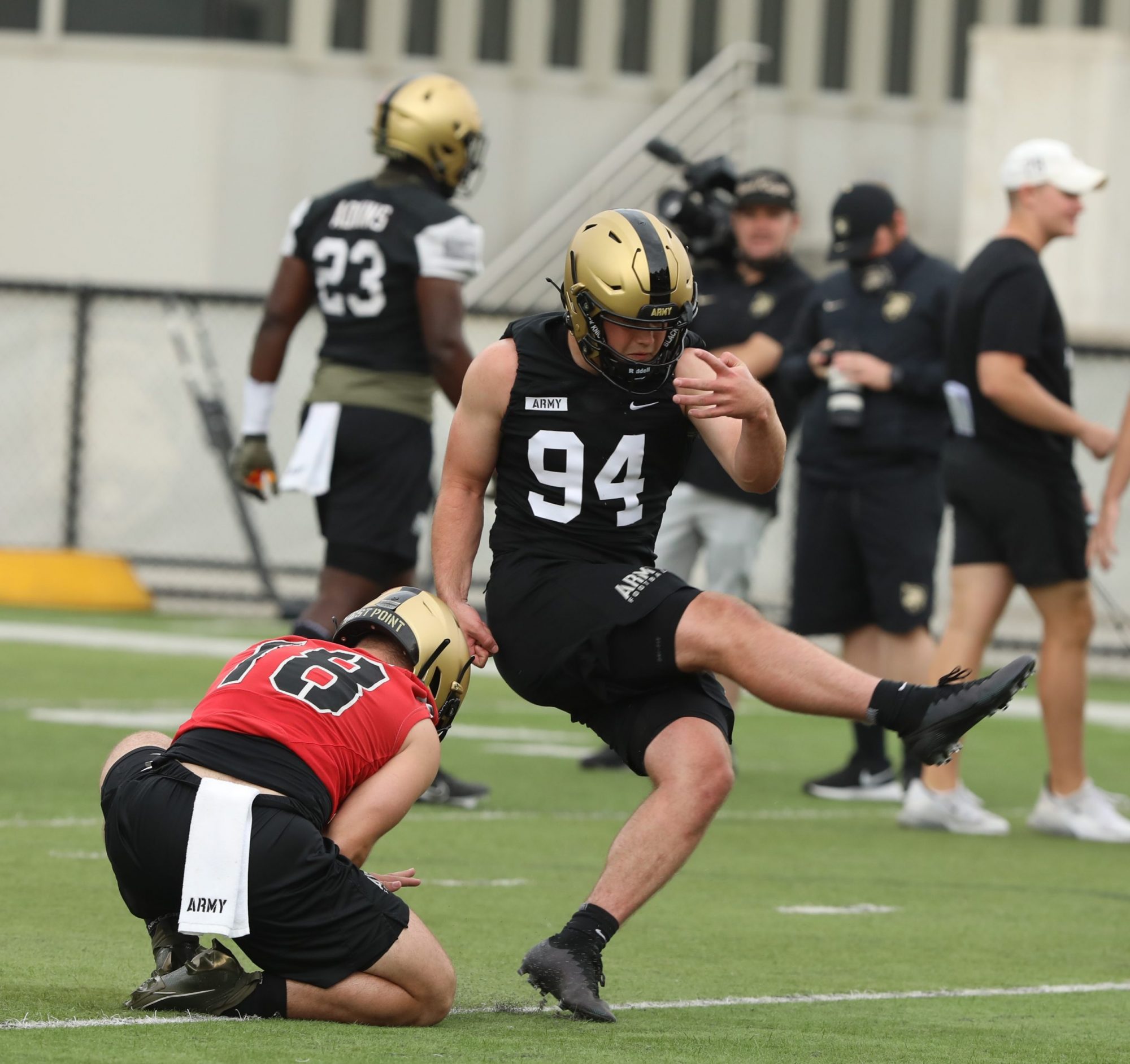 Cole Talley might have an addition to his pre-game playlist Saturday morning.

Talley has listened to country music to stay calm in the past.

But, lately, Talley and Army’s specialist group have turned it up to early 2000s rock music including Good Charlotte in the weight room.

“Patrick (Szczesniak, long snapper), Quinn (Maretzki) and the whole spec group, we’ve been listening to rock and it will get you hyped for sure,” said Talley, Army’s junior kicker. “I’m thinking about mixing a little bit of that in.”

No matter what plays for hype music, Talley described getting ready for his first game since freshman season with one word – eager. Talley was with the team his sophomore year but, “kind of dug myself a hole with some personal things,” he said. Talley won the kicking job out of preseason camp his freshman season and made 20 kicks (19 extra points and one field goal) in seven games battling through injury.

“I’m climbing out it (the hole),” Talley said. “I wouldn’t be able to climb out of it if it weren’t for the brothers on the team that we have. This is just an awesome group of guys. I’m so blessed and glad that I came to this school. I wouldn’t be the person I am today if it wasn’t for my best friends and not just the specialist room but the whole team.

“These are going to be friends that I’ve made for life. They are just great guys and I learned a lot about myself and the kind of man I want to be by just hanging out with these guys.”

While Army’s quarterbacks competition with five returning starters gained most of the attention this preseason, Talley and Maretzki were pushing each other to be Army’s top kicker. Maretzki finished the 2020 season as the Black Knights’ field goal and extra point specialist.

“I love Quinn,” Talley said. “He’s one of my favorite people on the team. He’s just a great guy all around. We both work really hard. He’s an awesome guy. Whoever (the coaches choose) will help the team as much as possible.”

“He’s had a good preseason,” Monken said. “He looks a lot like he did a couple of years ago just getting great lift on the ball on the field goals and PATs…He’s got a really strong leg and he just got himself in good physical condition. It’s been a real battle between him and Maretzki all preseason camp.”

Talley has focused on the technical side of the game in the preseason and keeping his head when he swings through the football.

“It’s really, really detailed oriented,” Talley said. “A lot of people don’t really think about it but there’s kind of a science to it. An example that I like to use a lot that more people understand is to compare golf and kicking. The most important thing in golf is having a straight swing. For me, it’s the same thing in kicking. That’s the easiest comparison I can use for someone who has never kicked before.”

Talley said games his freshman season including Michigan in front of 111,000 fans have released any jitters that he may have. He’ll be ready when he gets his next opportunity to kick.

“I’m just going to be excited,” Talley said. “I just want to do well to help the team and help my brothers. I feel that’s just the biggest thing that I can focus on, just try to do the best that I can in order to help them.”

Here’s our interview with Talley earlier this week

Country has usualTalley’s past music of choices have been country to stay calm.

Talley and the specialist group