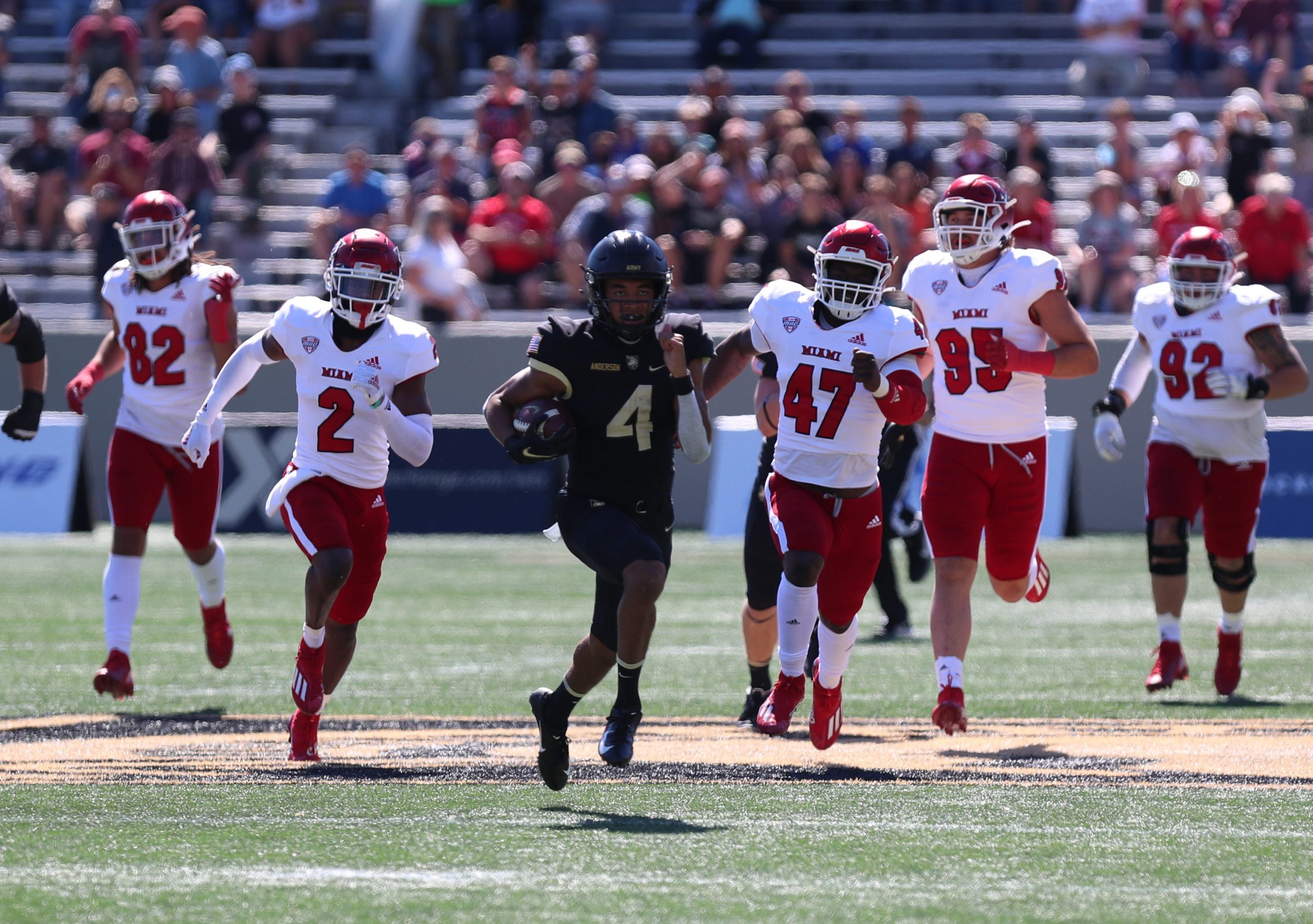 With academy single-game rushing holder Terry Baggett in attendance, Anderson broke off a 72-yard touchdown on his second carry and a 75-yard score on his fourth attempt.

The senior quarterback produced another highlight run when he eluded Miami (Ohio) three tacklers in the backfield near Army’s goal line and reversed his field for a 42-yard gain in the third quarter.

Anderson, who was played through an apparent ankle injury, wouldn’t finish the game, landing on his right (throwing) shoulder after a legal hit by Ivan Pace with 8:43 left.

Army rallied behind quarterback Tyhier Tyler to run out the clock for its 13th straight victory at Michie Stadium and first 4-0 start since 1996 with the help of a goal-line stand by the defense in a 23-10 win.

But, Anderson’s status is in question moving forward. Coach Jeff Monken didn’t have an update on Anderson during his postgame press conference.

Anderson’s career-high 236 rushing yards are sixth on Army’s all-time list. Baggett set the record with 304 yards against Eastern Michigan in 2013. Anderson is the first Army quarterback to have two touchdown runs of 70 or more yards in the program’s storied history.

“To have the game that he (Anderson) had and have to come out was too bad,” Monken said. “I wish he could have finished it out. We have other good quarterbacks and Tyhier Tyler is one of them and he came in the game and finish it that game out and did a really nice job. We’ll see what’s going on with Christian and I know he’s got a lot of great football ahead of him.”

Army earned its fourth straight wire-to-wire win of the season. Though, this one may have been the most physically taxing, Monken said. Miami (1-3) recorded six tackles for loss.

“It was going to be a fight all the way to the end,” Monken said. “We had some big runs to get some scores but really beyond that we had to earn every single inch. They did as good of a job defending us as anybody all year.”

One of the game’s turning points came in the third quarter as Army’s defense held Miami out of the end zone on two tries from the Black Knights’ 1-yard line. Safety Cedrick Cunningham stuffed David Afari on third down and cornerback Cam Jones covered Miami’s receiver in the flat on a fourth-down incompletion. The Black Knights also held Miami to 28 rushing yards on

“Preparation breeds confidence,” Army senior linebacker Arik Smith said. “I think us working on having an unique confidence during the week is what allows us to be confident and come out like we performed today.”

“It was a good play to cap off a long drive,” said Adkins, who scored for the third straight game. “That’s what we are build for, the longer drives and it was just great blocking up front.”

The Black Knights received a boost from their special teams with blocked punts by Reikan Donaldson and Malkelm Morrison. Donaldson’s rejection was recovered at Miami’s 14 but Army settled for a 21-yard field goal by Cole Talley.

“It ended up being three points which is really disappointing, to turn a great play like that into a touchdown would have been huge but it was a great block,” Monken said. “He (Donaldson) did a really nice job of skimming the gap, went right to it, saw that he was going to get it and laid out for it. When we scooped it up I was hoping that we might score.”

Tyler, who saw his first action since Army’s season-opening win at Georgia State, clinched the victory, converting a 4th-and-3 late.

Monken seemed unfazed when he was asked about Army starting 4-0 for the first time in 25 years. Saturday’s win wasn’t as easy as the score might have indicated.

“I just hope we can have a good practice tomorrow afternoon,” Monken said. “I’ll settle for that and try to get ready for the next one (at Ball State Saturday(. I thought our guys played tough and played hard. There were some good individual efforts throughout the game and they were coming from a bunch of different places.”

An individual effort by Anderson that won’t be forgotten. And, his teammates picking him up for another Army victory.