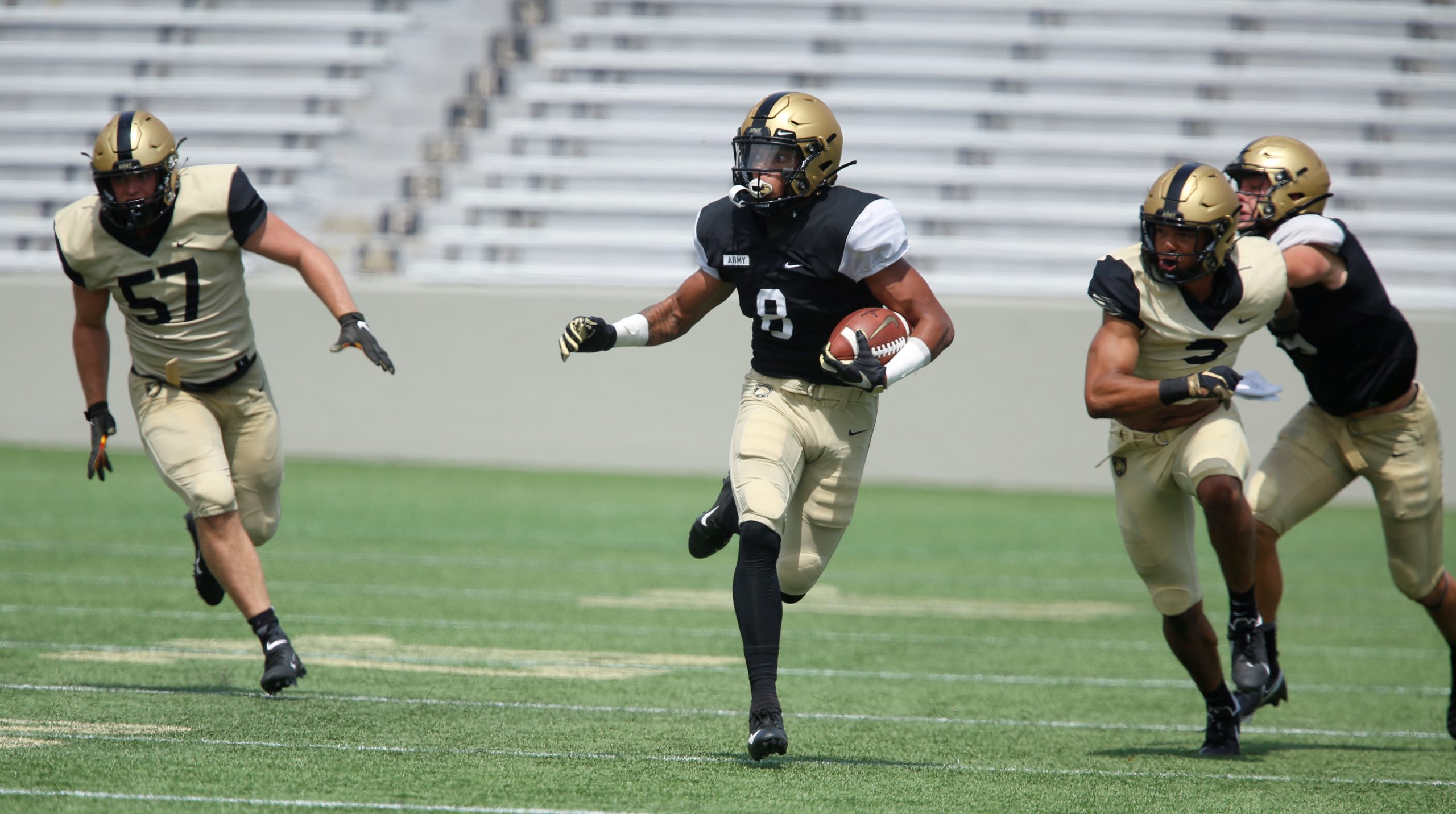 Braheam Murphy makes getting to the edge look effortlessly as he takes a pitch outside during Army’s second scrimmage.

Murphy has caught his share of passes from a variety of quarterbacks in the preseason.

The junior slotback’s focus was directed away from any individual efforts at the end of his post-scrimmage interview Saturday.

“I did a lot of blocking for my teammates,” Murphy said. “That was the main thing.”

A couple of Army coaches challenged Murphy in the offseason to step up and lead in the slotback room and special teams. Murphy worked his way into the slotback rotation during his sophomore season, starting against Texas-San Antonio and Tulane. He said he’s, “working on being a team player” in the preseason.

Army returns senior slotbacks A.J. Howard and Brandon Walters to a position that can roll up to six-deep on gameday. Murphy’s guidance can help younger players including freshman Laquan Veney. His impressions of West Point have changed since his plebe year.

“I got a better perspective,” Murphy said. “At first, it was a little bit shaky getting my boots wet, getting my feet wet and learning how the academy works. Now, I feel like I’m all in and I’m becoming a better leader of character. It works out for me with football and also in Corps (of Cadets).”

Murphy recently posted a quote on his Twitter, “If it was easy, everybody would do it.” Summer football camp is history. Classes started last week and the balance between high academics and football begins.

“School can get a little bit hard here and it’s just managing your time,” Murphy said. “The toughest guys and the best guys go to this school. We have a challenge but all of us we stick together and we get through it.”

Murphy’s Army football highlight to this date may be his first career touchdown – a 12-yard run in a comeback win over Georgia Southern last November. Murphy credits his teammates for the run.

“It was surprising a little bit,” Murphy said. “I didn’t know the play was going to get called. From there, everybody else made the play for me. I was able to rely on the guys to right and left of me and they set that up for me perfectly.”

Here’s our interview with Braheam Murphy: