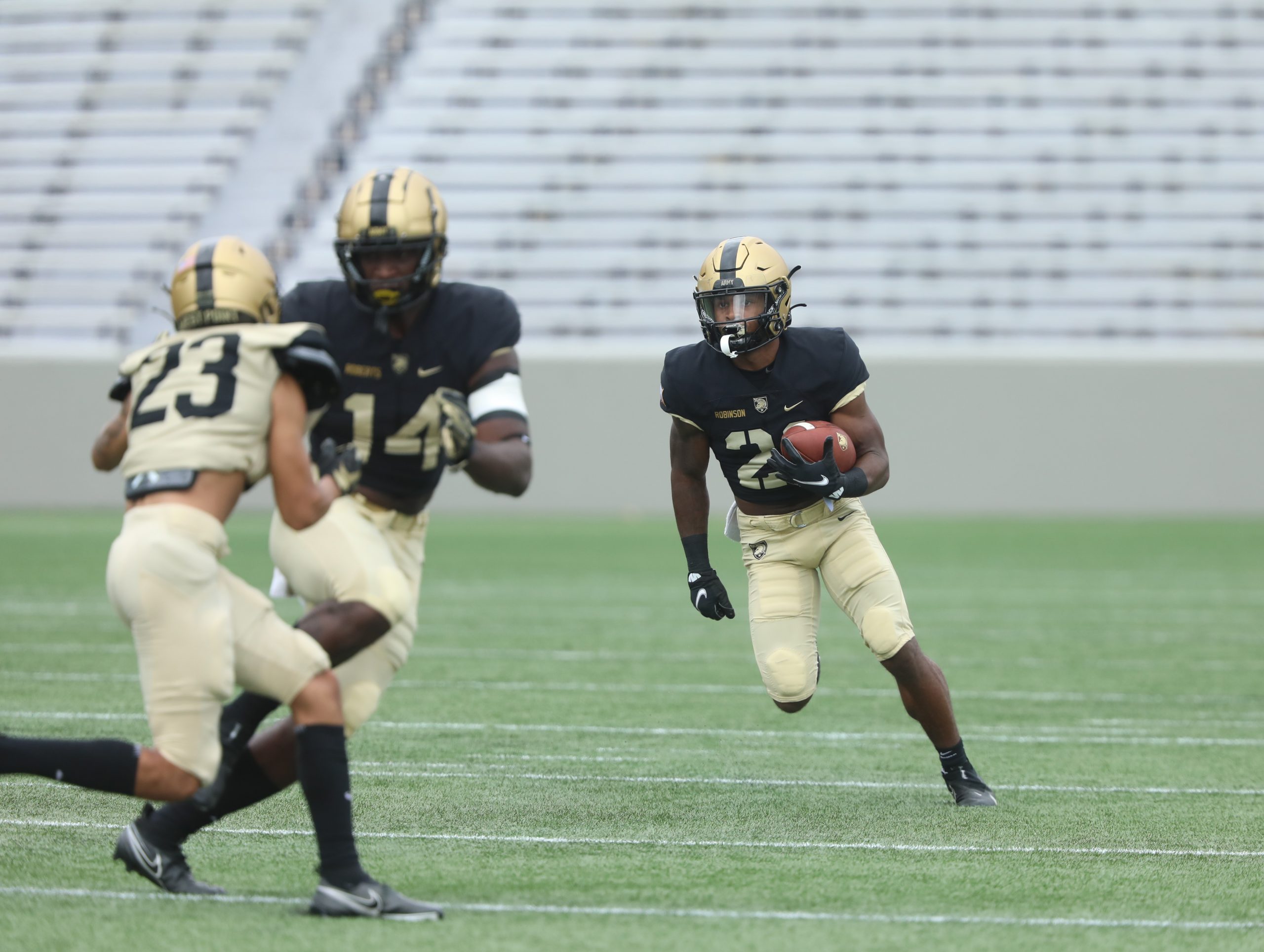 Army’s final preseason scrimmage may have looked like a regular-season game with a running game clock and officials.

Jeff Monken even created some scenarios that Army may see in its season opener at Georgia State one week away.

But, one gameday element was missing by design. Tackling.

Ball carriers weren’t taken to the ground as Monken wants to get his healthiest team to the gate.

“We do enough of that our defense tackling our scouts and our offense blocking below the waist,” Monken said. “We still blocked below the waist and had live blocks with our offense. Part of the plan going into the day was to get into these different situations but not put ourselves in jeopardy of getting injured.”

The focus was on fundamentals. And, Monken said the team “got into just about every special teams scenario possible.”

“It wasn’t a scrimmage where I was really concerned about how played grade-wise in terms of how guys performed.” Monken said. “I wanted to make sure our guys blocked the right guy. played the right gap and cover the right man and did all the things right from a mental standpoint and that we played hard.”

Quarterback competition talk: Monken said Tyhier Tyler and Christian Anderson “are probably at the top of (depth chart) and are battling it out” (to be the starter). Junior Jemel Jones, “is a very close third” and senior Jabari Laws “is going to be able to help out football team” and “can be up there in the top one, two or three at any time..” Laws is returning from knee injury and hasn’t taken a game snap since November 2019.

“I think as we go through this week it will clarify itself in what we kind of need to be doing in terms of the game plan,” Monken said. “I have confidence in all of those guys and I have confidence in Cade Ballard and Maurice Bellan. If we had to play the season with either one of those guys, I think we would be fine. They can operate the offense. They are confident. Our players are confident in them. They are very smart and they take care of the ball. They are good quarterbacks. We just have the good fortune that we have a good mix of guys that we feel pretty good about.”

“It will be interesting to see what happens with Spencer Jones coming back,” Monken said. “He’s been injured. He did practice today but to see how his health comes along and if he’s not healthy, who is going to be the will linebacker that lines up with Arik Smith.”

Finding depth along the offensive line has been a development in the preseason. Monken said that Knapp, “is probably the backup center,” but sophomore Jackson Filipowicz “has done some good things.”

“He’s a really tough kid,” Monken said of Filipowicz. “He’s a state finalist as a wrestler in Georgia. Just the toughness and balance with being a wrestler, I love finding guys that.”

Monken said sophomore tight end Simon Dellinger is working at tackle. He compared Dellinger to junior tackle Ben Koch, who started off as a tight end at Army.

“Finding the depth we know we are going to need throughout the year. We have not gone a season here since I’ve been here that we played with the same offensive line every week. It’s physical game and in offense, that’s a physical position that takes a lot of hits and dishes out a lot of hits. They are on the ground a lot, a lot more than a traditional offense. Historically, we know that we are going to need more guys than the starting five.”