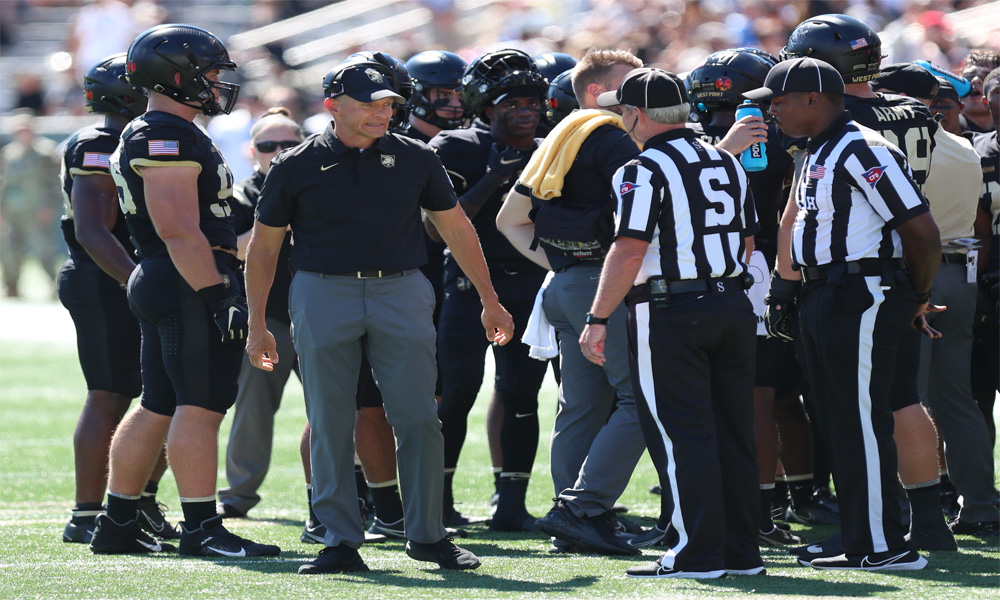 Jeff Monken was asked to describe his team in one word through Army’s first four games of the season.

“I think that’s a pretty good trait to have,” Monken added. “I feel we have tough players, not just physically tough but I think they are mentally tough. They are very resilient. I think that’s a fitting description of them.”

One of those tough players is quarterback Christian Anderson. The senior appeared to be playing through an ankle injury when a hit knocked him out of Army’s 23-10 win over Miami (Ohio) Saturday.

The good news is that Monken said Anderson, who looked like he hurt his shoulder on the landing, is ‘day to day.”

“It’s a painful injury that he’s got,” Monken said. “Fortunately, it’s not anything broken or anything like that. Just going to have to work on getting the swelling out and getting him healthy. He’s still hurting pretty good from the injury. We’ll get him rehabilitation every day. We’re just going to see how it progresses. We’re not sure on the timeline of it right now.”

Monken provided updates on fullback Tyson Riley and cornerback Julian McDuffie, both season-opening starters who have missed recent games due to injury. He said, “Riley, we are anticipating is going to be playing this week.” McDuffie is, “back with us healthy and closer to being 100 percent,” Monken said.

Monken agrees that most coaches would love to be 4-0 after four games but he’s still looking for improved play. This is only Army’s fourth 4-0 start in the last 70 seasons.

“There’s things that we have to improve on in every phase,” Monken said. “We try to recognize those things each week and use the game as an evaluation tool to really give our guys constructive feedback on the things that can do individually and things we can do as a team to improve.”

“We are fortunate to be one of the teams that is 4-0. So, I’m pleased that we have been able to find a way to win each of these games. But again, it’s more about the standard of the way we play and how we perform and prepare than it is the end result of the game or the end result in terms of wins and losses.”

Keeping Army’s offense on the field for a successful 4th-and-1 from its own 1-yard up 14 in the third quarter wasn’t a complete surprise to those that follow the team closely. It’s what Army does. It’s a mentality, Monken said.

“That was an easy decision based on the analytics and the trust that we have in our lineman to block and the slots and the running backs that we hand it too. It wasn’t a decision that we made at that point. That decision was made long before we got to the game on Saturday.”