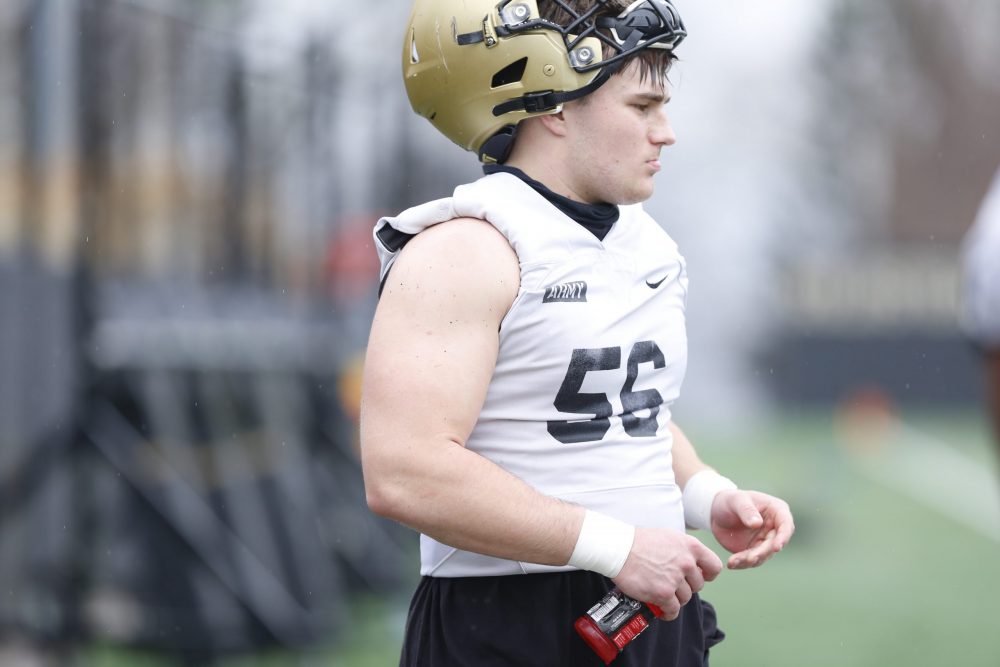 Hill beat an offensive lineman and won his first 1-on-1 pass-rushing drill. The freshman’s first pass-rush drill ever.

“I was like, ‘What in the world, I don’t know what I’m even doing,” said Hill as he gets ready for his first Army Black and Gold game Friday night.

Hill decided to move from inside linebacker to defensive end under the suggestion of Army defensive coordinator Nate Woody this spring. He filled a valuable role as a scout-team player in his first college season. Hill had never put his hand in the dirt during a decorated high school career at Evangelical Christian outside of Memphis, Tenn. He played one game at defensive end his sophomore season.

“It was kind of the defense that we run here with the stunts,” Hill said.

The spring switch has been, “a process,” Hill said. And, a success. Hill’s effort and play has caught the attention of the coaching staff. Head coach Jeff Monken, Woody and special teams Sean Saturnio have all brought up Hill as a player that has impressed.

Hill’s progress has made the 2019 Mr. Tennessee Football one of Army’s breakout players this spring.

“That was hard decision for me to make,” said Woody of Hill’s position change. “I thought Austin Hill was going to be a guy that could contribute for us and our team to win at linebacker. I really liked the way he was playing linebacker. But, I thought if we could get him closer to the line of scrimmage and get him to where he’s attacking an offensive tackle or an offensive guard from a pass-rush standpoint or penetration in the backfield, I felt that would serve us even better.

“You can see his potential. You know he’s going to be able to step into our two-deep and help us early. Is he to the point of where he’s interchangeable as a starter? Not quite yet, but he’s made tremendous strides to get to that point and we are really, really pleased with his potential in giving us enough pass-rushing upfront and a guy that can penetrate the line of scrimmage on run downs.”

“For me, it’s just everything I do positive, I try to keep that in my bank and look at all of the improvements I need to make and not try to get too negative,” Hill said. “Just stay level headed and use those positives as energy to keep me level-headed.”

Hill had his share of options coming out of high school. Ivy League schools recruited him. He also could have played closer to home at the Division I-AA level. Why did Hill chose West Point?

“It’s bigger than football,” said Hill, whose grandfather Bill Ervin is a West Point graduate. “It’s an honor to serve my country and just the opportunities here and again the football team when I came on my visits the people are great, the coaches are great. Coach Monken has that blue-collar mentality that I really like and it’s been great so far. I don’t regret it one bit.”

Making it to Friday’s Black and Gold game is a milestone of sorts for Hill during his plebe year. Hill is taking the advice of safety Marquel Broughton in his preparation for the game.

“Marquel Broughton told us, “it’s meant to have fun,’ so I’m going to go out there and enjoy it and let it be that. I’m excited. I’m pumped.”

Hill believes the most critical point of his development as a football player come after the spring game and this summer. He plans on hitting the weights, working on technique and watching as much film possible in between military training and summer classes.

“This summer is the biggest and most important time for me to develop physically as well as mentally,” Hill said.