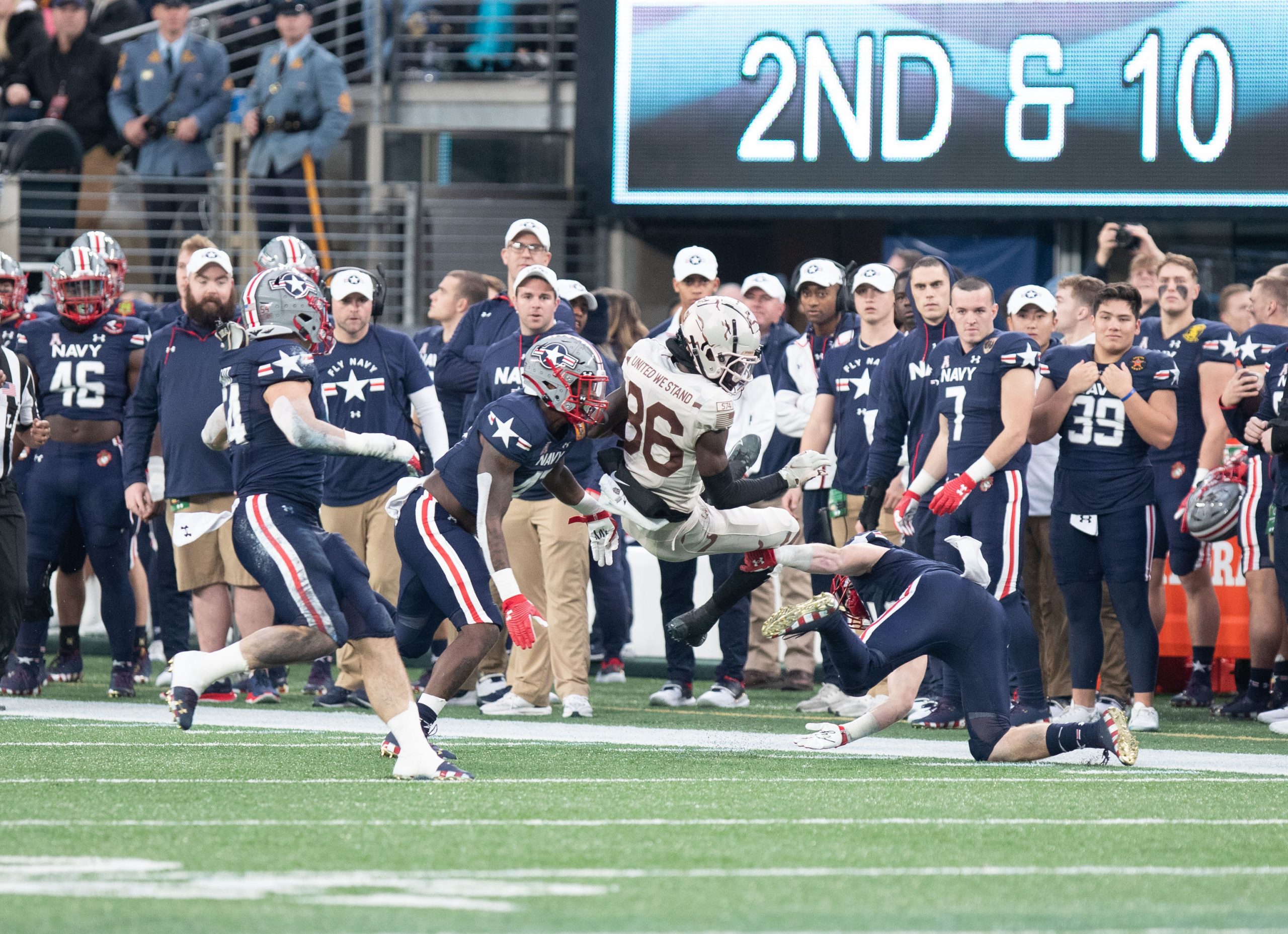 EAST RUTHERFORD, N.J. – Kemonte Yow screamed in disappointment as he headed toward the Corps of Cadets.

Andre Carter stopped at midfield, turned and watched Navy’s celebration for a moment.

Army couldn’t match Navy’s edge for 60 minutes. The Black Knights’ offense stumbled after an opening touchdown drive. And it was Navy’s offense and defense that had the answers on fourth down.

Christian Anderson was stopped one yard short on fourth down with 1:31 left and Navy, a touchdown underdog, ran out the clock for its second win over Army in six games.

“This is the game that we build up for year round, the team that we pretty much build our program around to beat,” said Army senior safety and captain Cedrick Cunningham. “So to lose to them is very disappointing, absolutely.”

Anderson’s 56-yard first-quarter run was Army’s only touchdown. The Black Knights’ rushing attack was stuffed, gaining just 68 yards and its other 32 carries.

Army has two highlights all game – Anderson’s run and Zach Harding’s punt that bounced out of bounds at Navy’s 1.

“Throughout the game, the second half especially, I think we just didn’t execute as well as we could have,” Anderson said. “We didn’t maintain blocks. I missed a couple of throws. I don’t think we were as effective or efficient as we could have been. Credit to them, they did a good job of filling gaps and making tackles.”

Army’s defense couldn’t get off the field to start the fourth quarter. Navy’s game-winning touchdown drive chewed up 8 minutes and 56 seconds and was extended early on Diego Fagot’s fourth-down conversion on a fake punt that he and Navy coach Ken Niumatalolo said wasn’t intended for the linebacker.

The shift in the game’s momentum may have come on Navy quarterback’s Tai Lavatai’s 8-yard touchdown run to tie the game at 7-7 in the first quarter. Lavatai powered through high tackling attempts by Broughton and Cunningham into the end zone on third down.

This rivalry game was Navy’s season after the Midshipmen won three of its 11 games, playing one of the nation’s toughest schedules. Navy played with a chip. Fagot held onto fullback Anthony Adkins’ ankle for more than five seconds after the whistle, twisting it. Adkins, who was returning from an ankle injury, tried to shake loose of Fagot’s hold and stomped on the linebacker’s chest. Both played received personal foul penalties. Fagot wasn’t flagged for hit on Tyrell Robinson out of bounds.

“They (Army) like to say that they are the last of the hard,” Fagot said. “Quite frankly, we took that to heart. They believe their culture is better than ours. They scored on the opening drive and they thought they were going to keep going their way. We aren’t going to lay down for them . We consistently kept coming back and coming back, so I don’t really know if they are the last of the hard.”

Army didn’t have an answer for Navy’s aggressive defense. The Black Knights were held to 32 yards on 12 first-down carries. When Army was forced to pass, Navy’s pressure forced Anderson to rush some throws.

“We got outplayed,” Army coach Jeff Monken said. “We got outcoached. That’s the bottom line.”

Army’s season has one more game left. The Black Knights plays Missouri in the Armed Forces Bowl on Dec. 22 in Ft. Worth, Texas. Monken and his coaching staff will have plenty of missed assignments to point out from Saturday.

“I’ll probably throw up when I watch it (the game tape),” Monken said. “Hopefully, there’s some things we can learn from it and get ready for the next game. I’m glad we don’t have to finish the season on that disappointing loss and get a chance to play again. I think our guys will be highly motivated to go to work tomorrow.

“It’s difficult to feel like it’s a good year when you lose this game.”